I never thought what began innocently as some smoke from under an Iceland glacier ,that cannot even be pronounced ,would have such horrendous impact world wide. This showed how fragile our civilisation and present livestyle can be even if we think we are the epitome of technology and scientific progress.

A little belch of nature put us in our place.

Do remember the last time Eyjafjallajökull volcano erupted in 1811, that eruption lasted on and off for 2 years. And what if big brother Katla decided to join in the fun? Historical data indicated Katla erupted shortly after the volcano which cannot be pronounced started up.

Perhaps we have to bring back trans-Atlantic steamers and maybe Clipper tall ships to ply the waters to Far East as well.

And to read of the looting of people and investors by Goldman Sachs and Paulson & Co with their ‘ Heads I win and tail you lose’ packaging. Honesty and ethics are in such short supply as can be seen in the existence of Lehmann Brothers, Madoff and people who stole from poor box in churches and marketing of *puke* harness. People with money wanted even more money, especially money which are not theirs to begin with. Such people are nothing but thieves and should be treated as the low life that they truly are.

I extract from above

My wife got back from her driving lesson on Monday 11 May 09. She had been anxious to do her driving lessons as she was to have her Part 2 driving test early next month. She passed her Part 1 on her 3rd attempt. The oil drums behaved themselves finally and did not lurch out of their line to hit her car when she was reversing.

Her driving lessons were postponed a few days. But her driving instructor finally got out of jail after 3 days.
He was caught running red light by a plainclothes police with a video camera. His alibi was not accepted that his view of the lights was blocked by this humongous truck ahead of him.

The authorities in Muscat have a heart. You do not get thrown into jail immediately. You can chose , within a decent time, when you go to jail.

Apparently any of us will have to go to jail for 2 days, but he being a driving instructor had to go for 3 days.

The instructor said he was not alone there as 2 policemen were with him for the same kind of traffic offence. But being policeman, they were jailed before he went in, and were still there when he came out. Apparently, it was 7 days for them as they supposed to know better.

And another guy was in jail too. He was caught driving too slowly. Don’t ask me why or how. I am just a mere reporter.
Hopefully this report will inspire people in Oman to drive even better in Oman. Perhaps readers in other countries might be inspired to drive better too.

While I did not distrust that driving instructor, I half believed what he said about the other 2 policemen in jail for traffic offence. I now believe him fully.

I received a video the other day which made me a true believer in the fairness of law in Oman and that the law applied to one and all.

This video is taken in Oman as can be seen in the Omani dress worn by passerbys.


I never realised the day will come when you see a ticket written by a policeman and given to a police officer. Would you expect to see this in your own country?

15th April 2010 was the first time that we drove up to Jebel Akhdar this year. Jebel is mountain and Akhdar is green, and is also known as the Green Mountain.

With the weather warming up, going to Buwah or the wadi are no longer viable.

Katleen joined us for the day.

It took about an hour to reach the foot of Jebel Akhdar via Birkat Al Mawz. While the road up is tarmac, that road is so steep that only 4WDs are allowed to go up and with a police check point near the foot of the mountain to enforce that. With Riamfada in the car, the policemen readily recognised us and waved us on with a smile.

In earlier reports, I had not known of the power of Google Earth. I think Google Earth can give you an idea better than the photos we had taken. 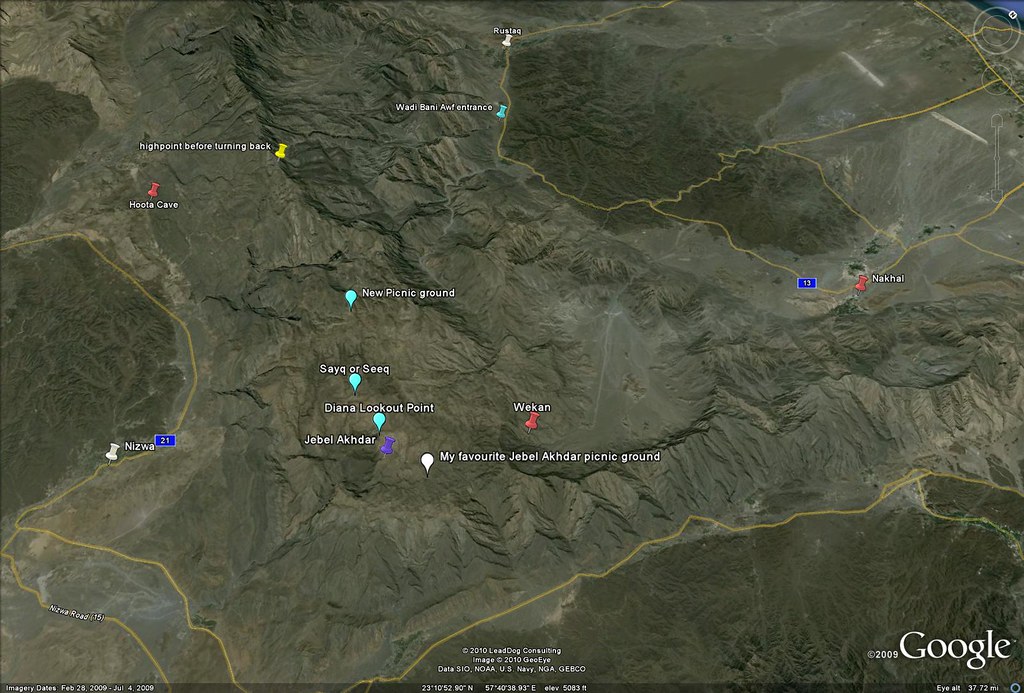 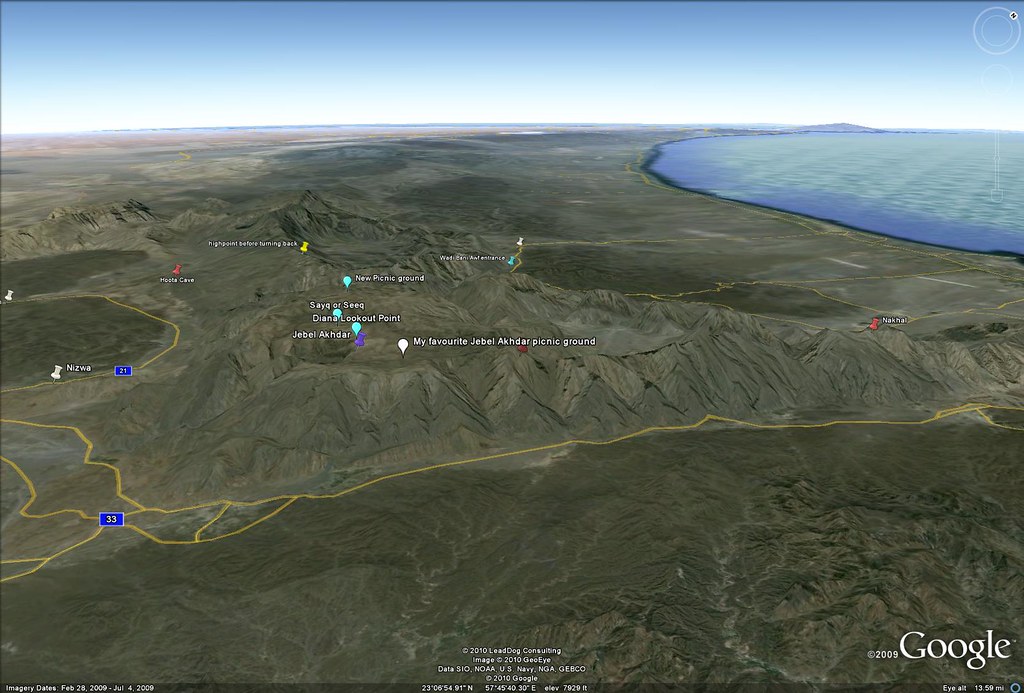 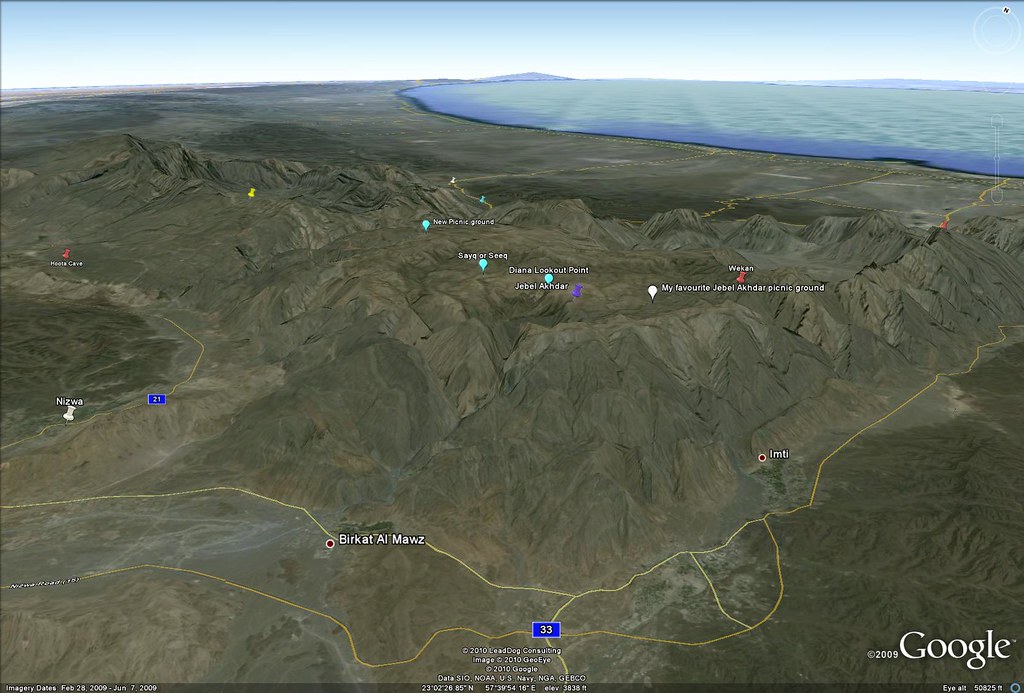 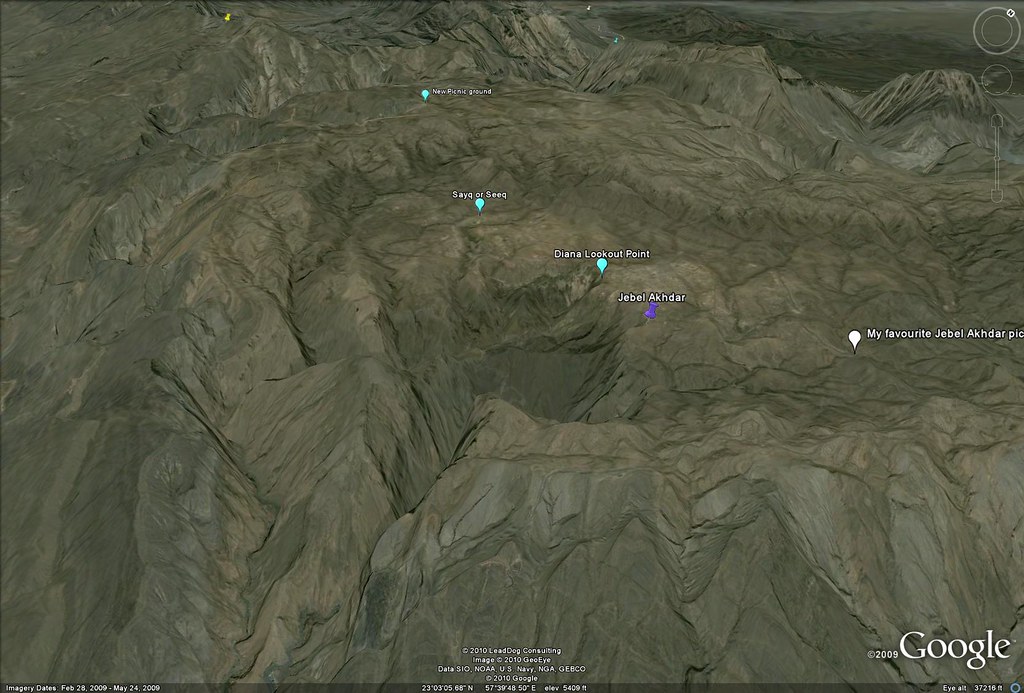 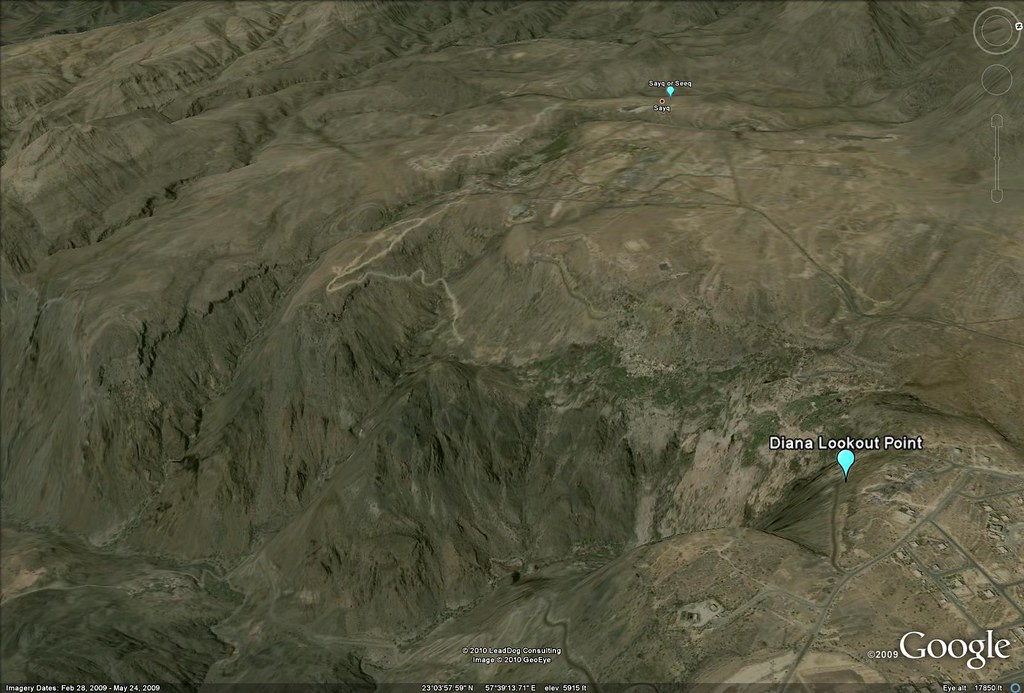 We did not go to Diana Lookout Point this time. You have seen many photos taken of this place before by my wife.

Princess Diana came to look at the fabulous view from this point. Needless to say, her lovely name remained behind even if she left us all too early and too soon. The good die young. 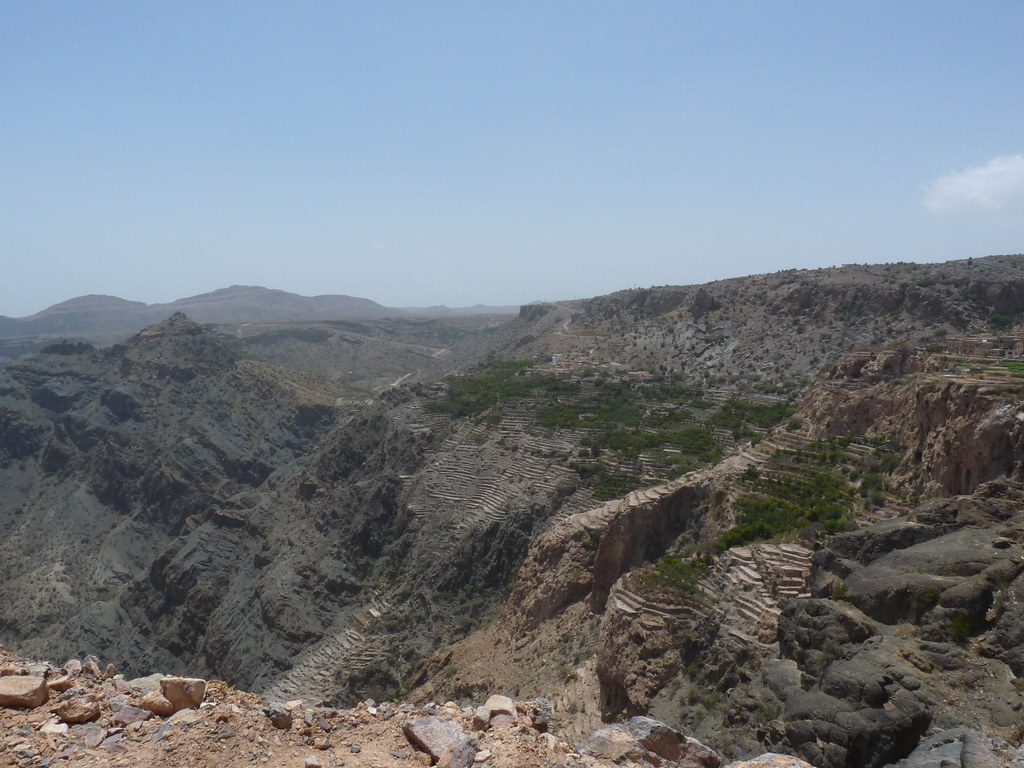 Photo of view from Diana Lookout Point from that trip 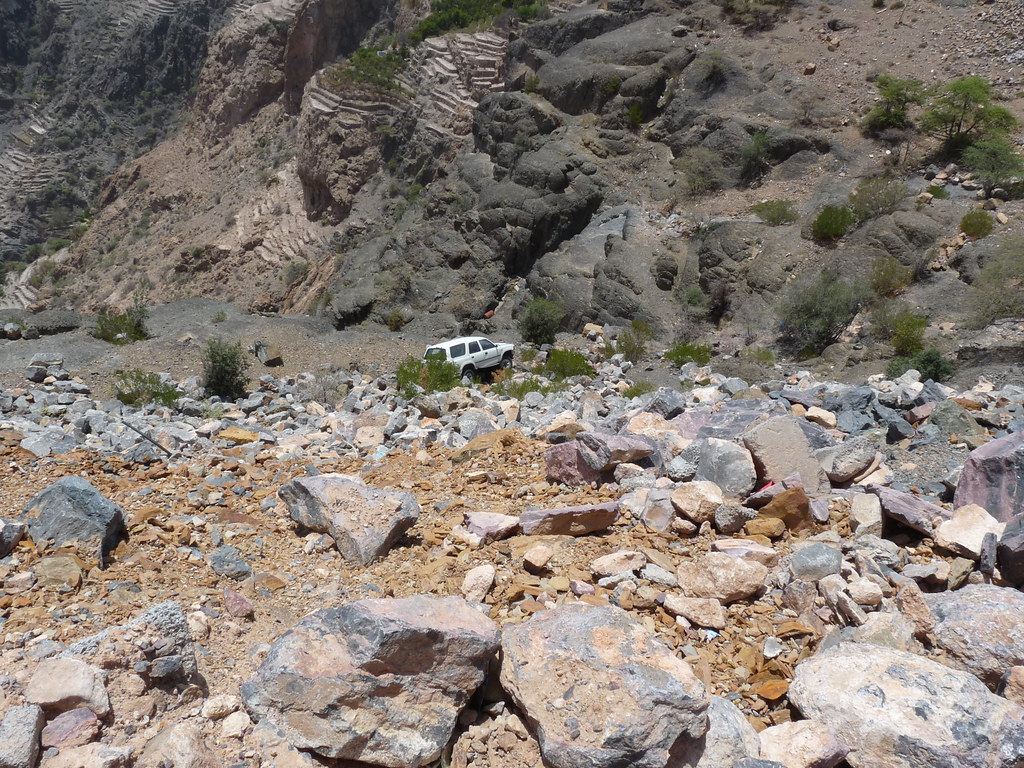 The SUV which fell down the slope was at this point as that driver thought the carpark was longer than what it was. 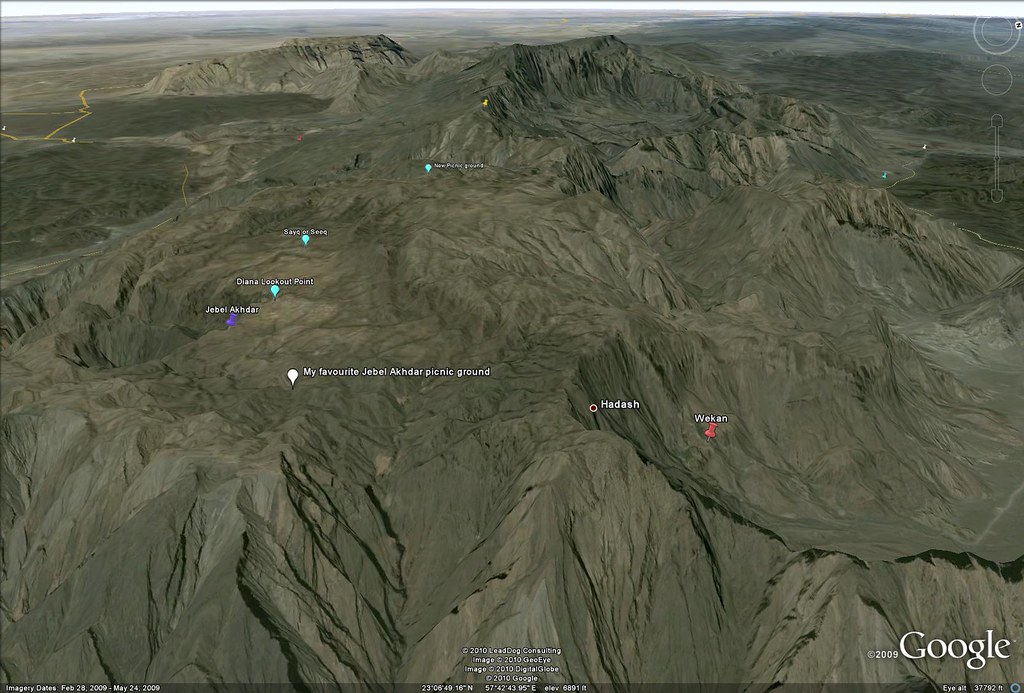 On this trip, we went on the Seeq, a little village way beyond the village of roses I had shown you earlier. We went there as there was supposed to be a distillory of rose water. We enjoyed the orchards of pomegranate trees and rose bushes even if we could not find the distillory. 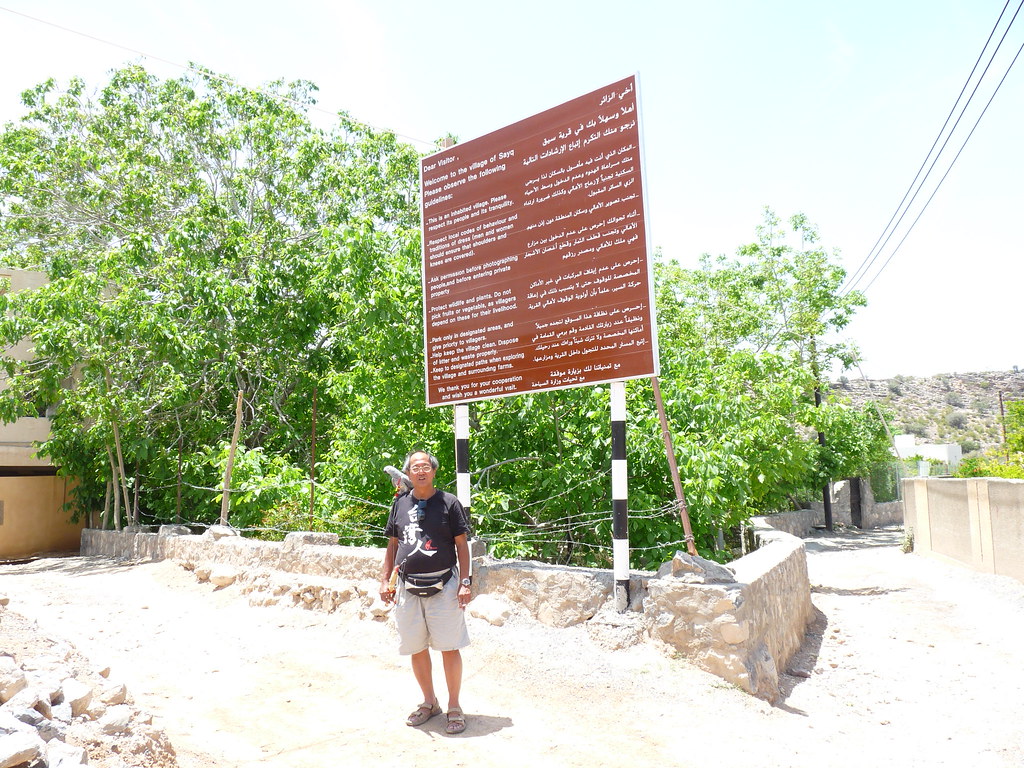 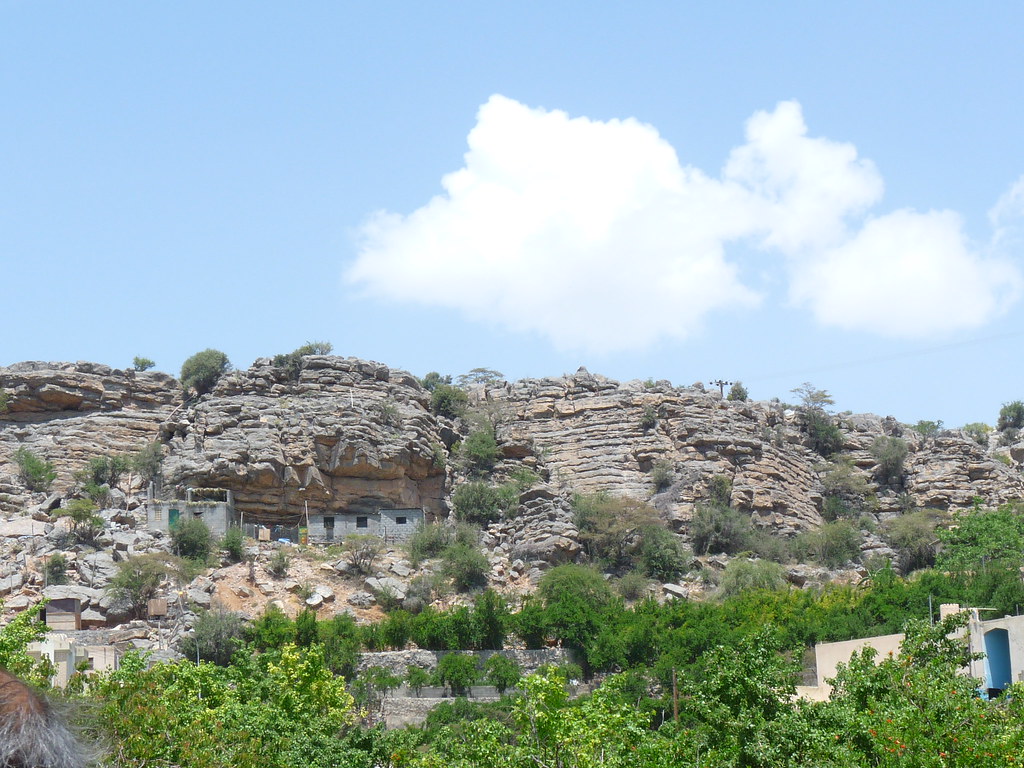 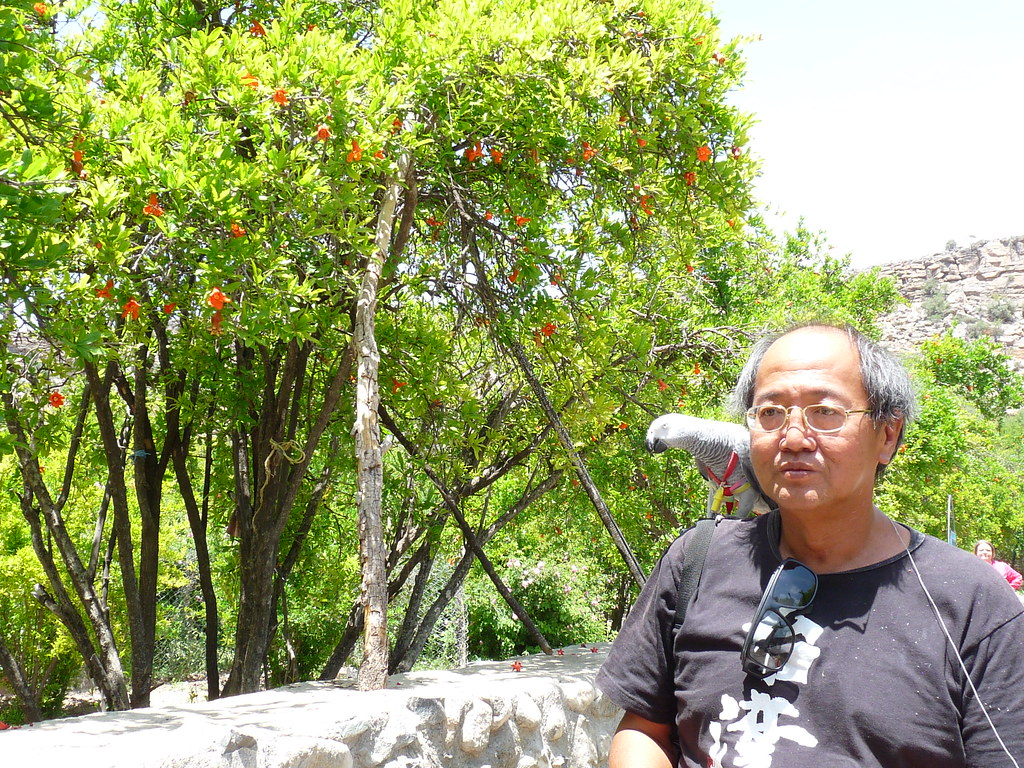 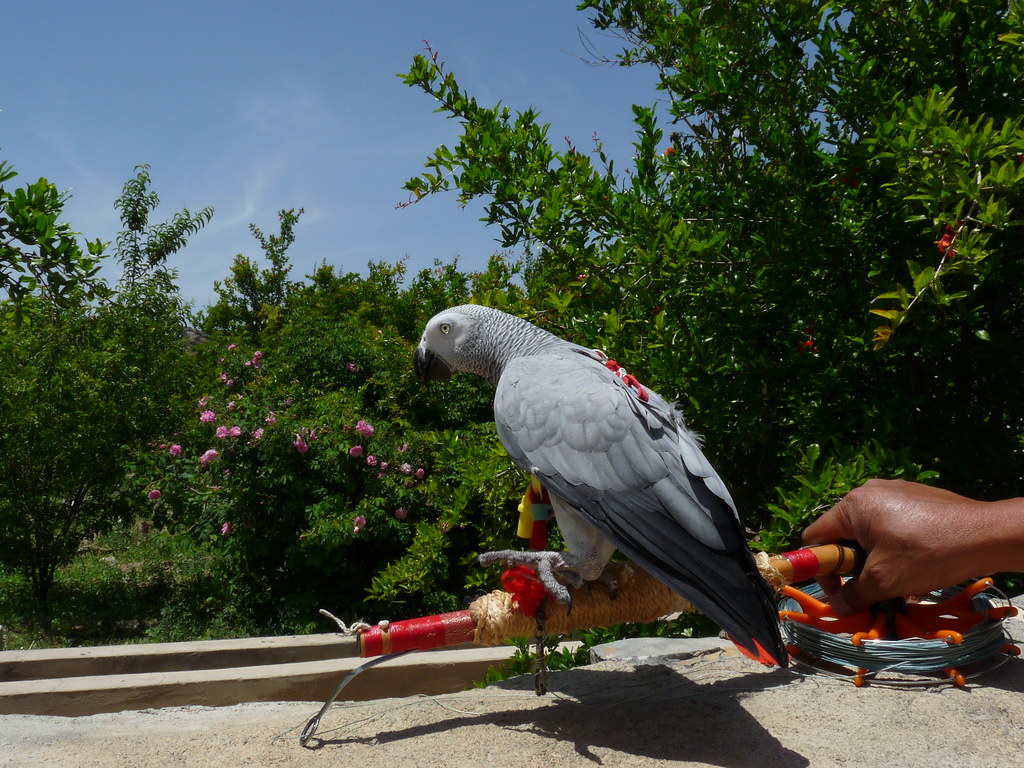 This was also an exploratory trip. I wanted to bring the kitties with us to the mountain. So we need to find a suitable spot, with nice shade and far away from roads and with few people.

We do have a favourite picnic spot, except that was at junction of 3 roads, not a good place to bring kitties too, and other families with kids liked to go there too. 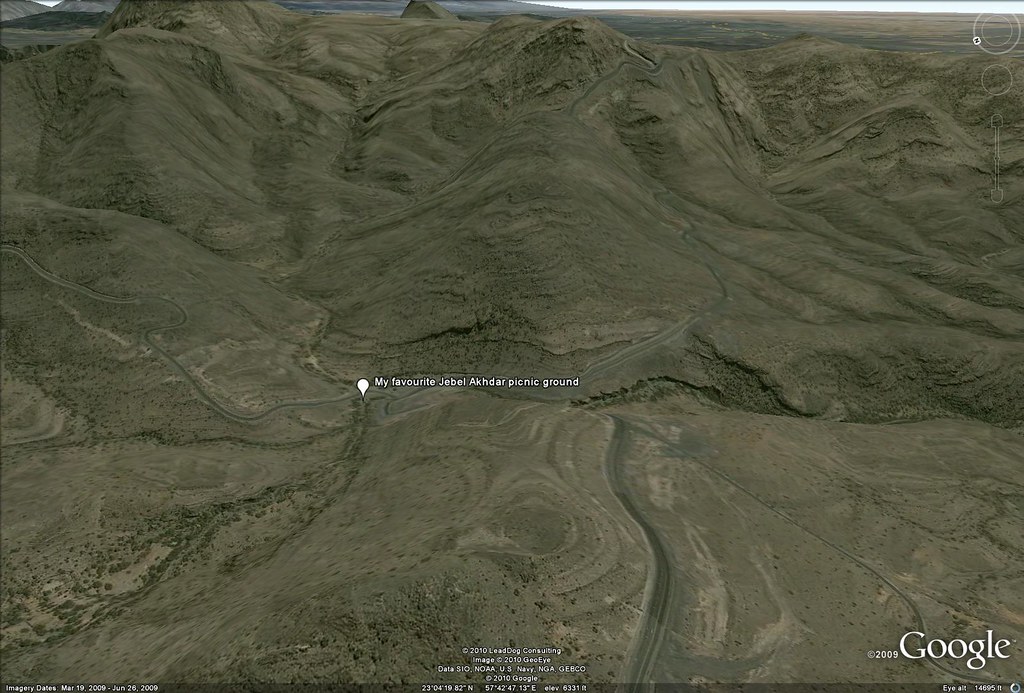 
Tinkerbell Mash is based on the formula for Mike’s Manna Mash created and given to the world by my good friend Mike Burton. Mike is sadly no longer with us but never will be forgotten as long as people prepare his mash or Tinkerbell Mash. There is a group dedicated to Mike’s Manna Mash and where you can get his original recipe from.
The folks there are very helpful and it will be nice of you to go there and say hi.

A few baggies were given to Max as you all read in
Al Falaj again//Meeting Max //Sailing regatta Extreme Sailing Series Asia.
http://shanlung.livejournal.com/110792.html

I was down to 2 baggies of batch 7 . So preparation for batch 8 started on Wed 14 Apr with the soaking of the beans and peas. Full details of how the mash is done is best read in mash batch 7 URL

(editted on 8Feb2011 to include
1 measure (50 grams) of peas This was in the photos but I forgot to include here until Morana pointed out my omission. Thank you Morana for pointing out this error)

(NOTE:
Lima beans contained linamarin, which releases a cyanide compound unless cooked thoroughly. The soaking/germinating process that I do reduces the linamarin.
The liquidizing of the all the beans ensured the beans are broken into small bits so that cooking is thorough to render harmless all poison from lima and other beans. This is a new addition on my part. If you do fear lima beans, you should exclude it) 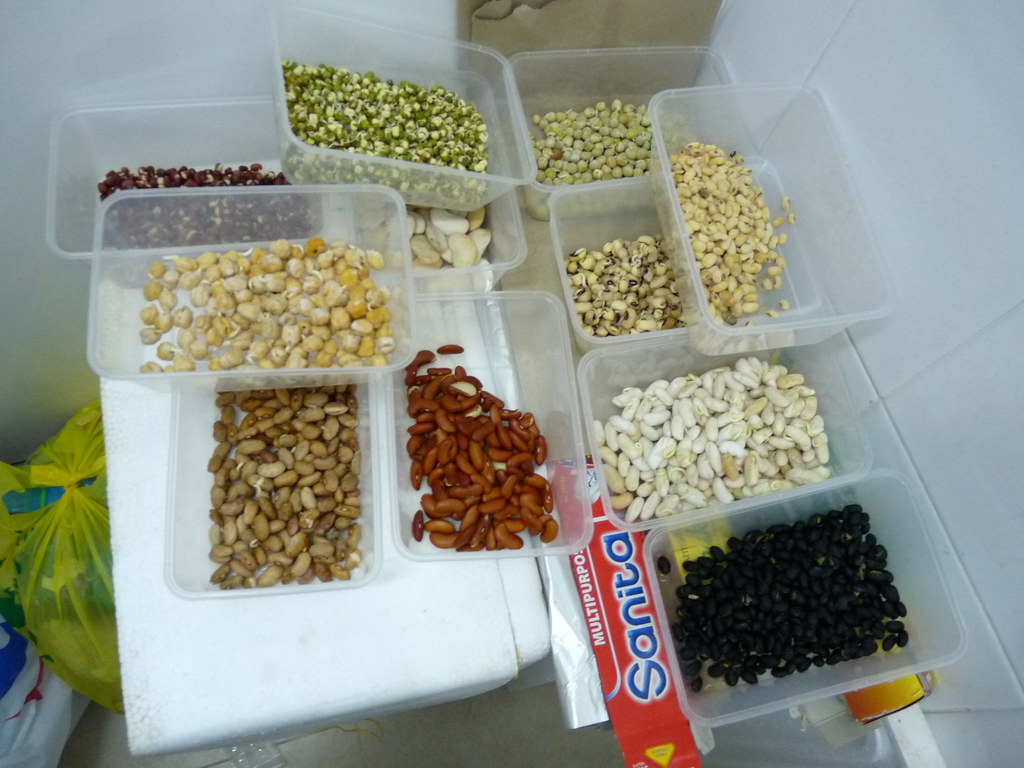 I made sure that I got the rolled brown barley this time too. 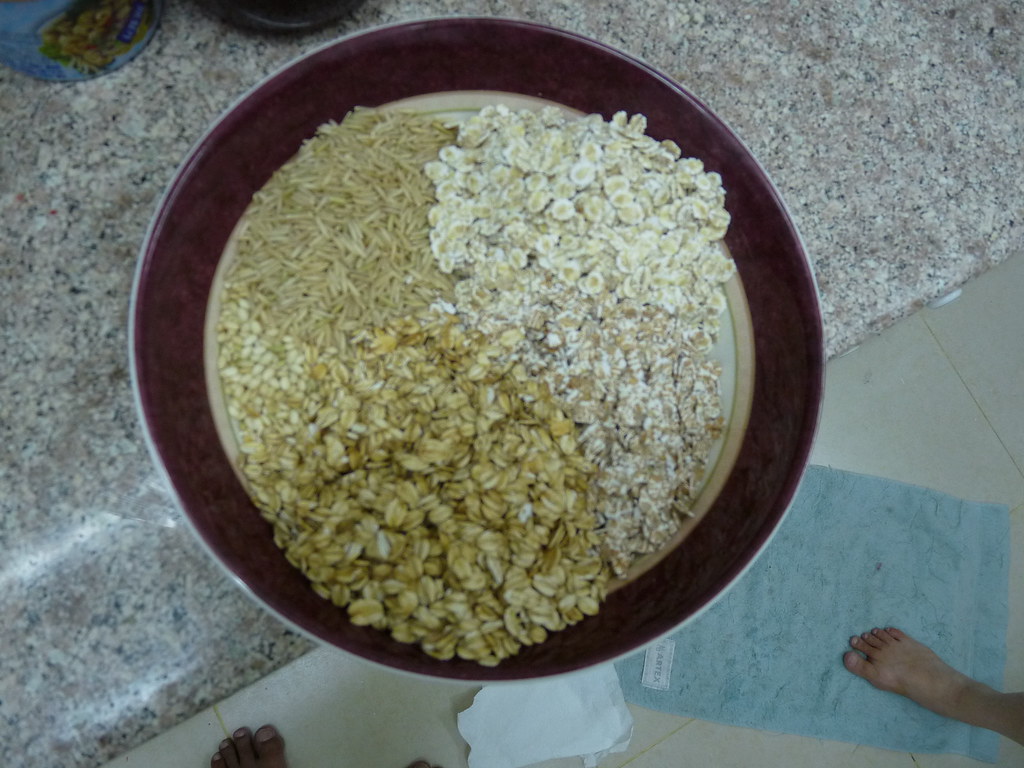 I decided to add almonds (71 grams) and brazil nuts (71 grams) in this batch as Riamfada liked that so much. 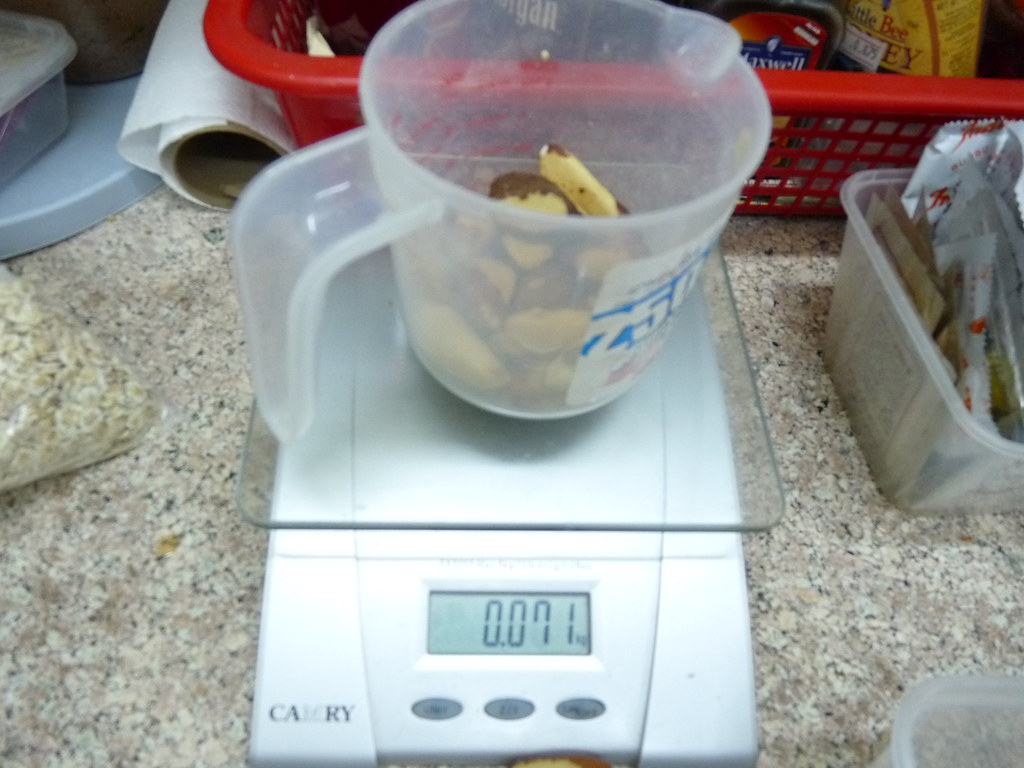 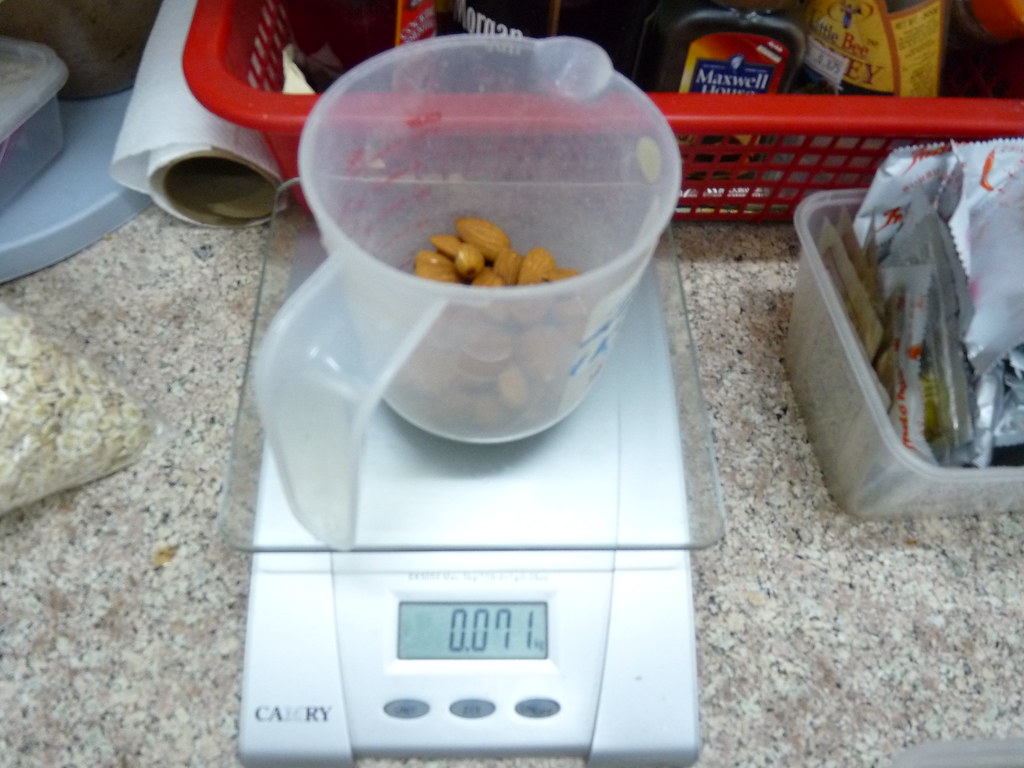 After the beans were parboiled for 5 minutes, the pot was left in the sink filled with water to cool before liquidising. I went to play chess in the Internet for 40 minutes.

The brazil nuts and almonds were liquidised with the beans. 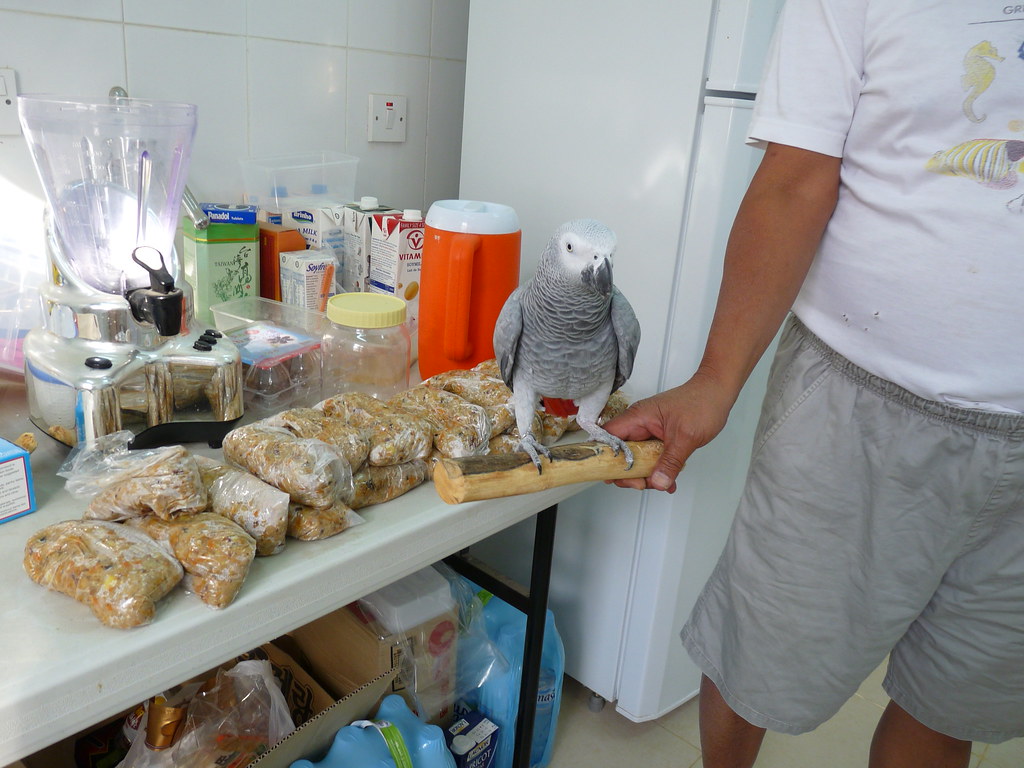 Mash batch 8 was given to Riamfada on Saturday afternoon. I thought she would love it with the addition of almond and brazil nut and was a bit disappointed when she did not take it at all.

I gave batch 8 with fruits on Sunday morning. I came back for lunch to find she took only the fruit. For her lunch, she got the same again. When I got back after work, I was getting very worried to see she refused the new mash despite the hard work I put into it.

I got back for lunch on Monday and checked what she ate. To my relief and happiness, she finished all of batch 8 that I gave her that morning. Since batch 7 was thawed, I decided to give her 5 grams of batch 7 with 20 grams of batch 8.

I came back after work on Monday to find she took all of batch 8 and had not taken batch 7 at all.

I guess I can say that Riamfada likes Tinkerbell mash batch 8 now.