In a world so full of pain , suicide bombers in Moscow, Iraq, Afghanistan and Pakistan, I am so glad of the happy news that 115 miners had been rescued after 7 days from the flooded Chinese mine. And that hopefully even more will be rescued in the coming hours. I had thought there would be no chance to save any. I am so happy I was wrong.

Seeing the sadness on grandmother Jabri, I had to tell her that Riamfada would be back again with them in a few weeks time.

We brought her back in time for our neighbourhood walk. Which had a wonderful zest again. Even the kitties appeared to be more frisky and happier now that Riam was back once more.

Riam was spoiled rotten. She loved the mulberries from the bush I planted in my garden. I felt sorry for the other wild birds that I originally planted that mulberry for. Now that Riam showed she loved that fruit, Riam would be getting the bulk of the mulberries.

There was some slight problem with the mulberries though, and same with the imported raspberries I fed Riamfada. Her poop became a ghastly shade of purple, too gross for me to show here in the livejournal. If you want to be freaked out, go see a photo of that in

On Thursday 1 April, I had originally intended to go to Jebel Akhdar,the Green Mountains. Except that day was still not that hot yet. Sadly, my wife put her foot down against taking the kitties to Jebel Akhdar because the place that we liked have other people there too. So just to take the kitties with us, we had to go to places like Buwah or Al Felaj.

It was strange that I decided on Al Felaj as explained later on.

But Al Felaj it was. Katie was not around, so only Dommie came with us.

We decided to go to the knoll up against the dam because of the breeze.

I saw this strange raw life and death struggle of nature there. A wasp had captured a big locust. That locust had been paralysed and that wasp was dragging that locust through the base camp, under my chair and then stored that on a clump of grass near the wheel of my car. 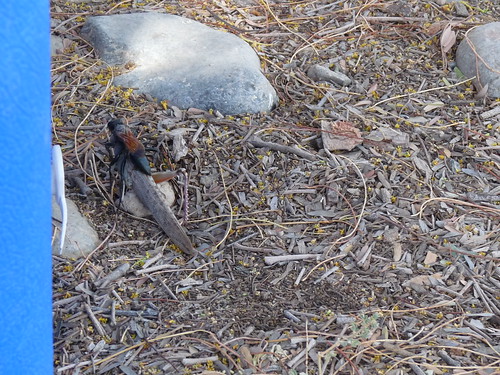 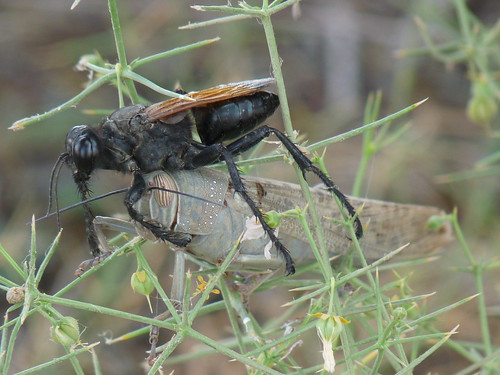 The wasp then flew off. Periodically returning to the locust, buzzing around, flying off and returning again.

I recalled an even more dramatic episode I saw when I was in Guangzhou , China when I was working on the underground subway system there. I was in their Botanical garden one weekend. A big tarantula spider rushed by where I was sitting. I then saw a metallic green wasp chasing that spider. It was a whirl of legs and wings and then the spider was subdued and being dragged away by the wasp. Then a big green lizard jumped on them both and ate them both. All that happened within 5 seconds.

We had our picnic lunch and just chilled out. 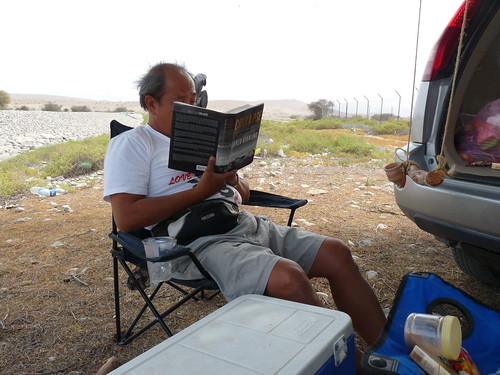 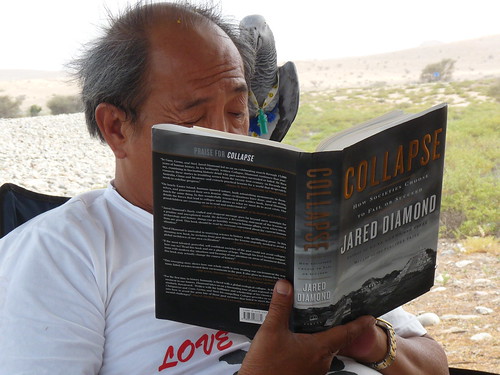 Just shortly after we left the dam, we came to this road that lead to the horse racing track. That day flags and banners lined the side of that road. Which prompted us to check out that horse racing track for the first time.

We found that was the last day of the horse racing season in Oman. Which became a gala affair.

We chucked Dommie into his carrier. Parked the car in the shade of bush and we walked out with Riamfada. If I had not decided to come to Al Felaj that day, we would have missed this colorful event entirely. 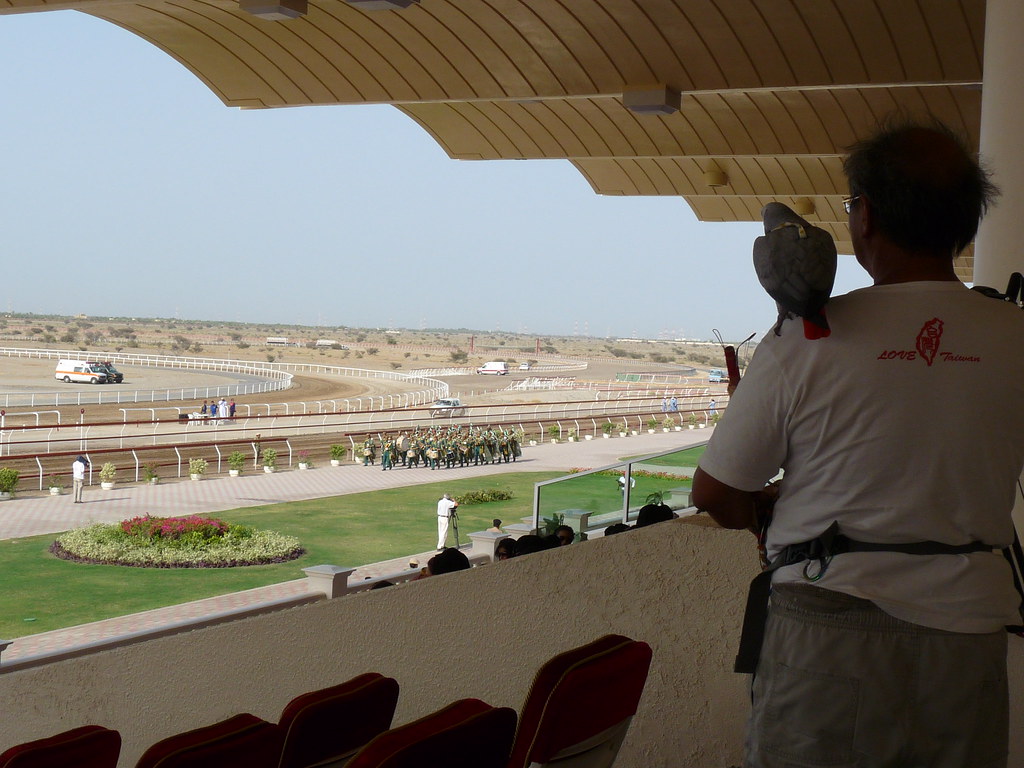 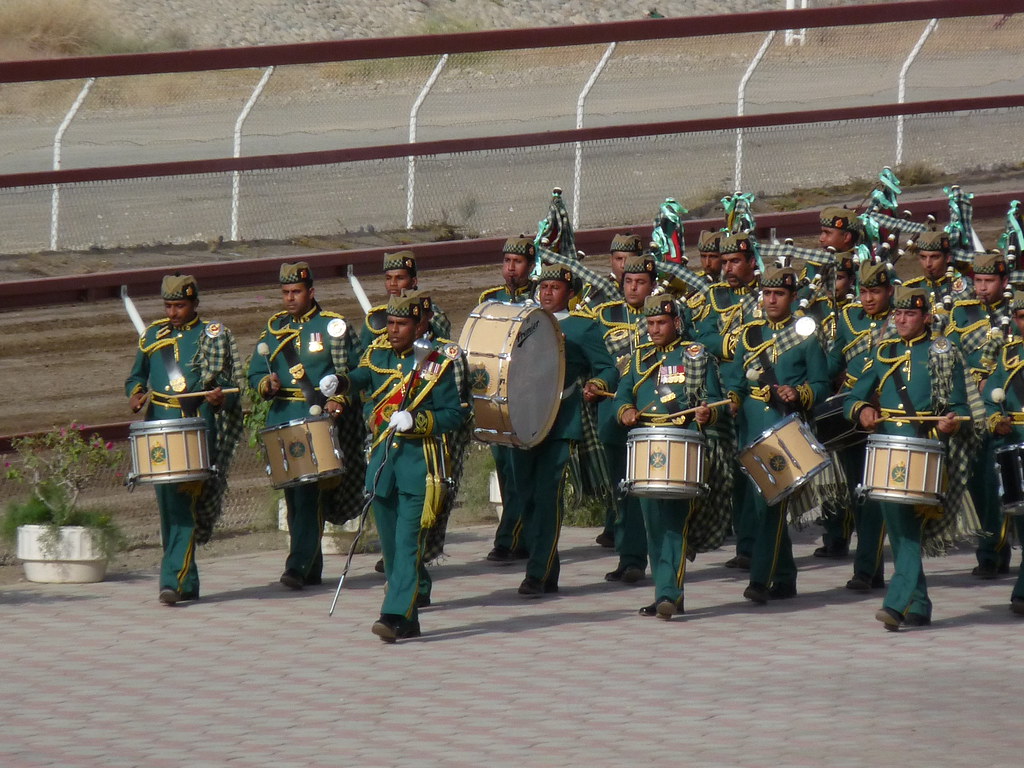 Unlike horse racing elsewhere, no betting and no tote was allowed in Oman. I have not bet on horses or went to watch horses racing before. People who came here love horse, other than for us who happened on this event by accident.

Not only entry was free. Refreshments and soft drinks and cakes were free for all spectators. The Sultan here looked after his people very well. 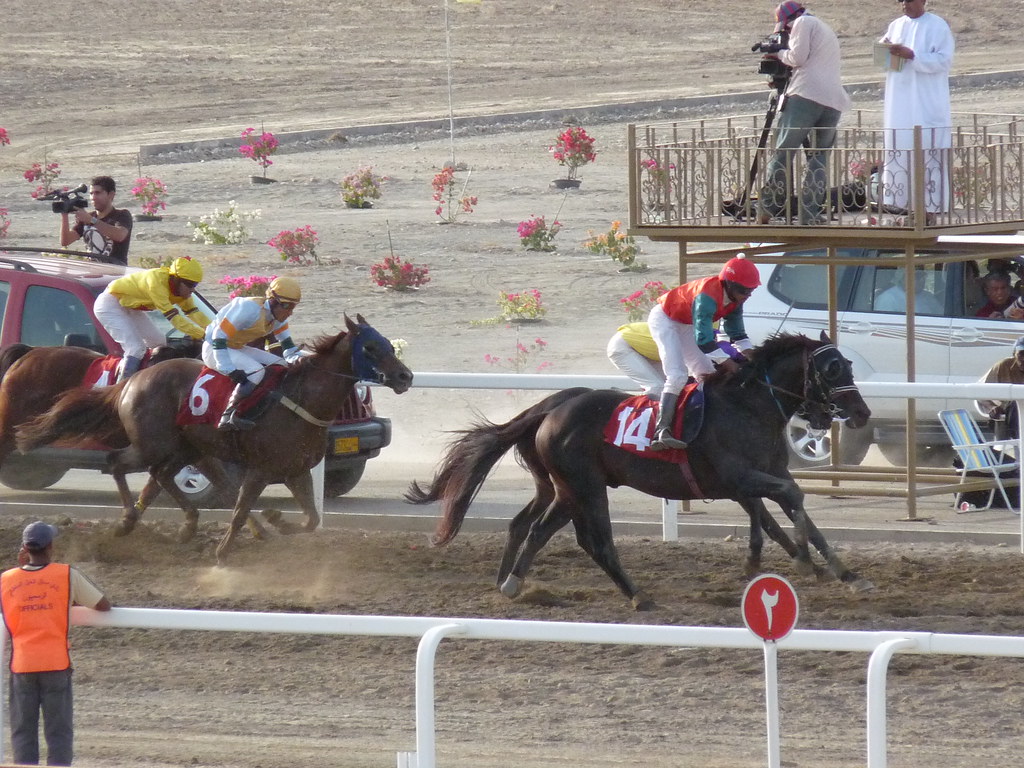 There were also trick riding too. 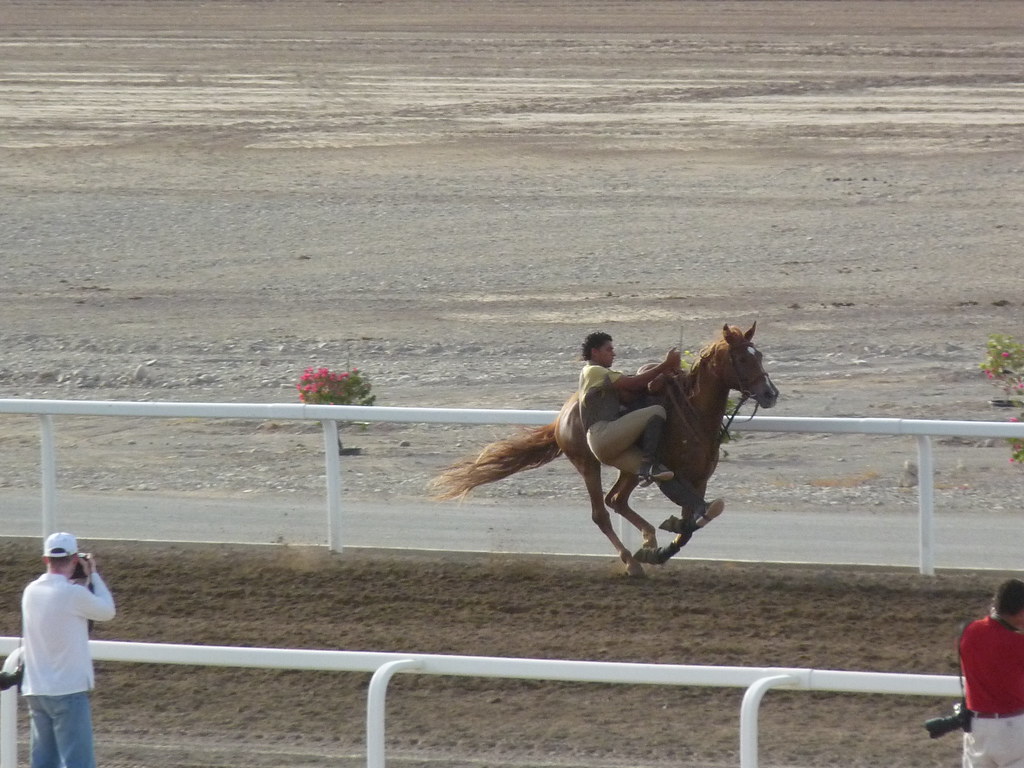 There were lancers, galloping down the track to the row of drums to lance objects on the ground. 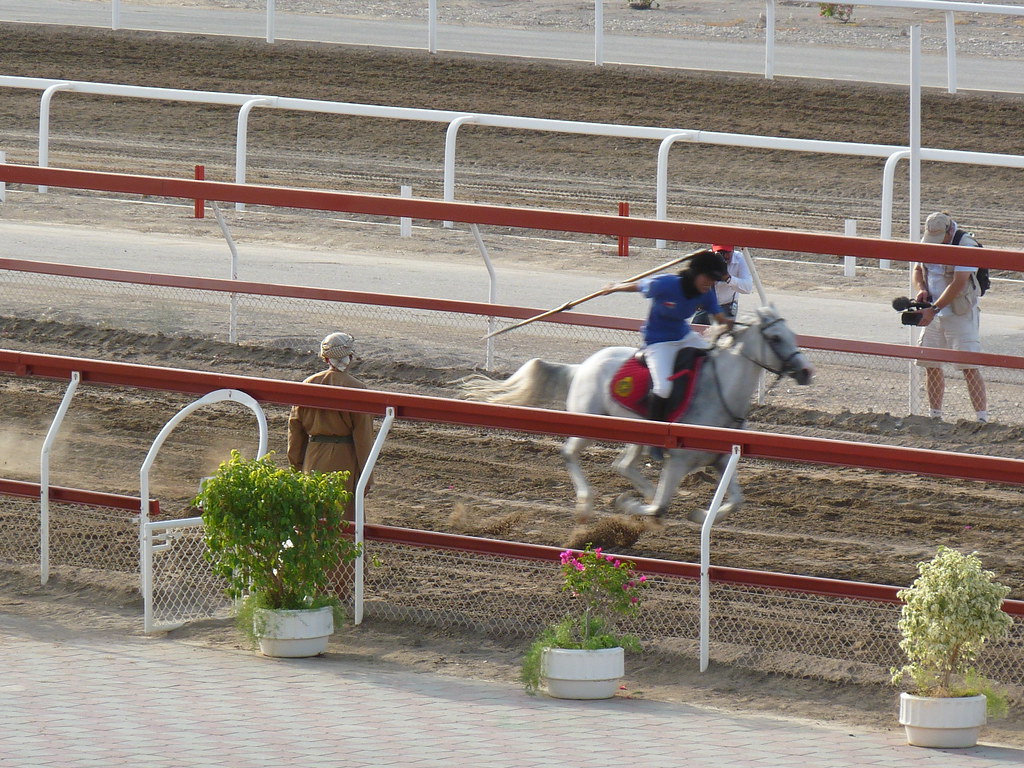 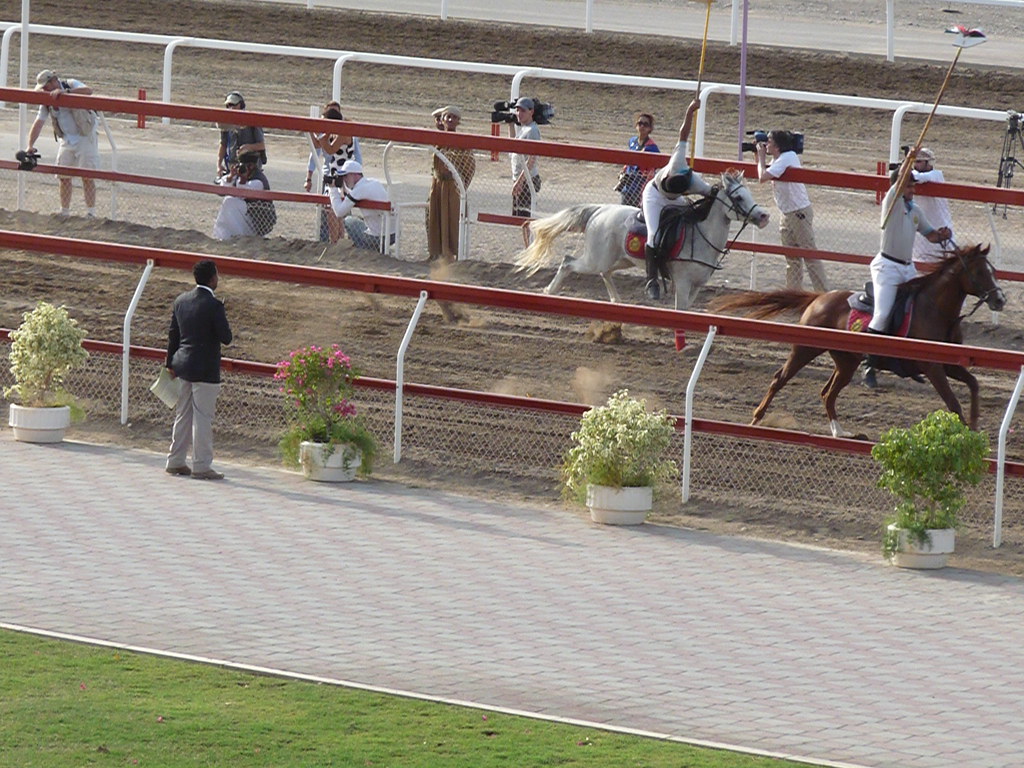 And barefoot riders, no saddles, male and females, dressed like courtiers on of old on their horses. 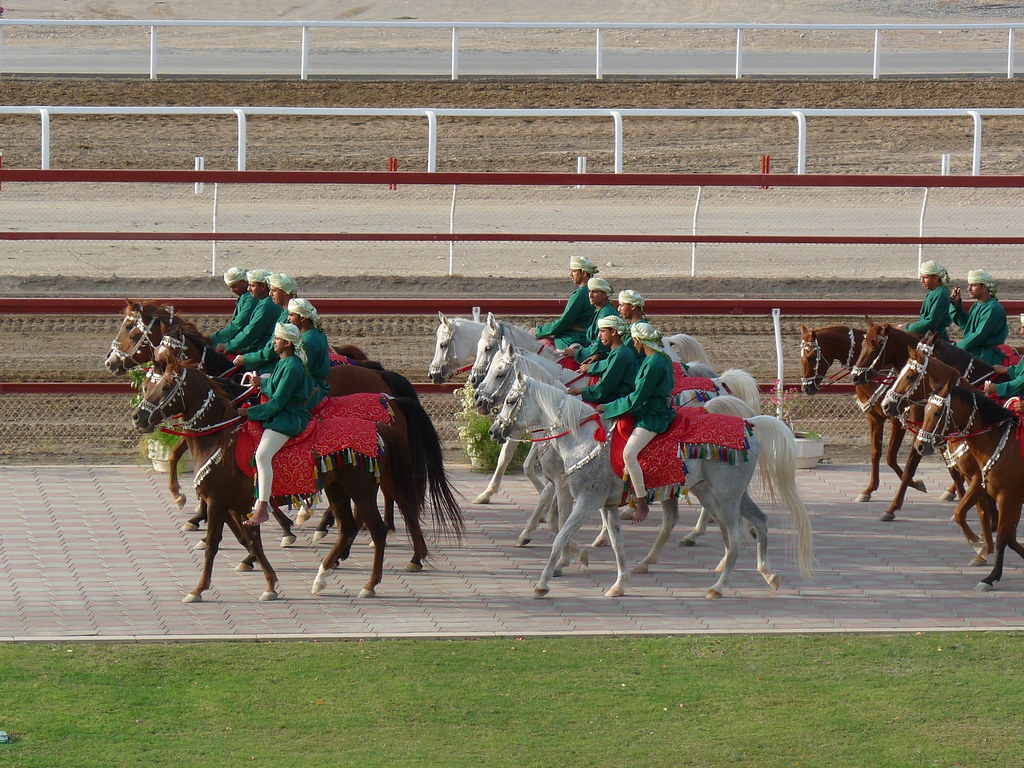 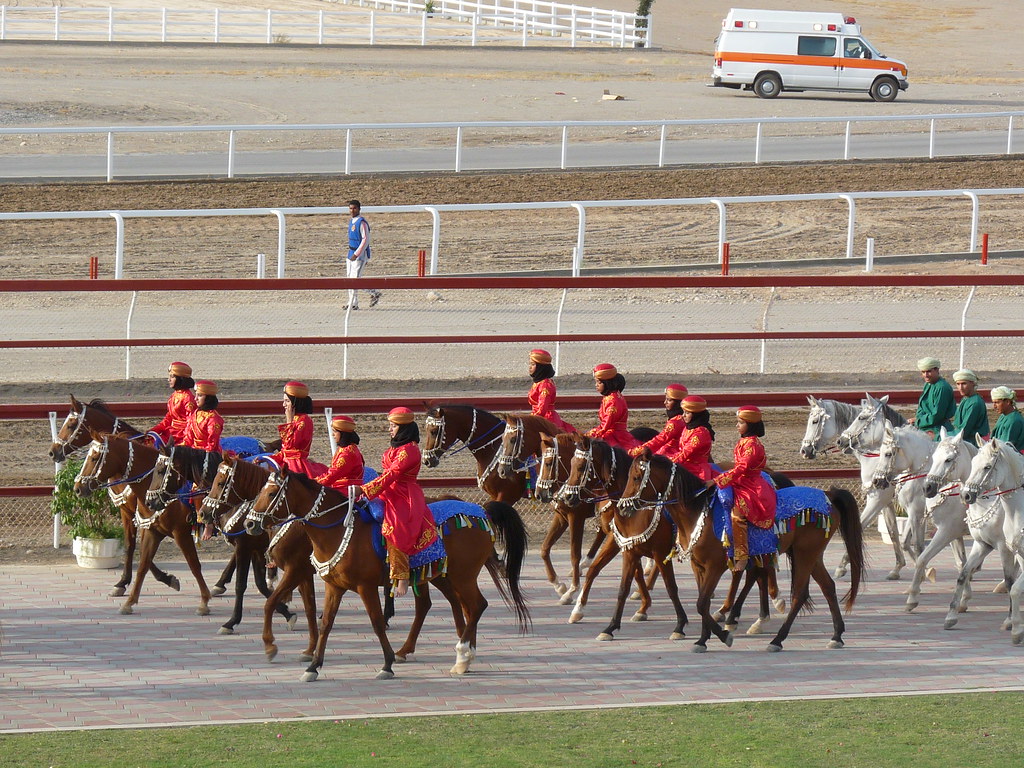 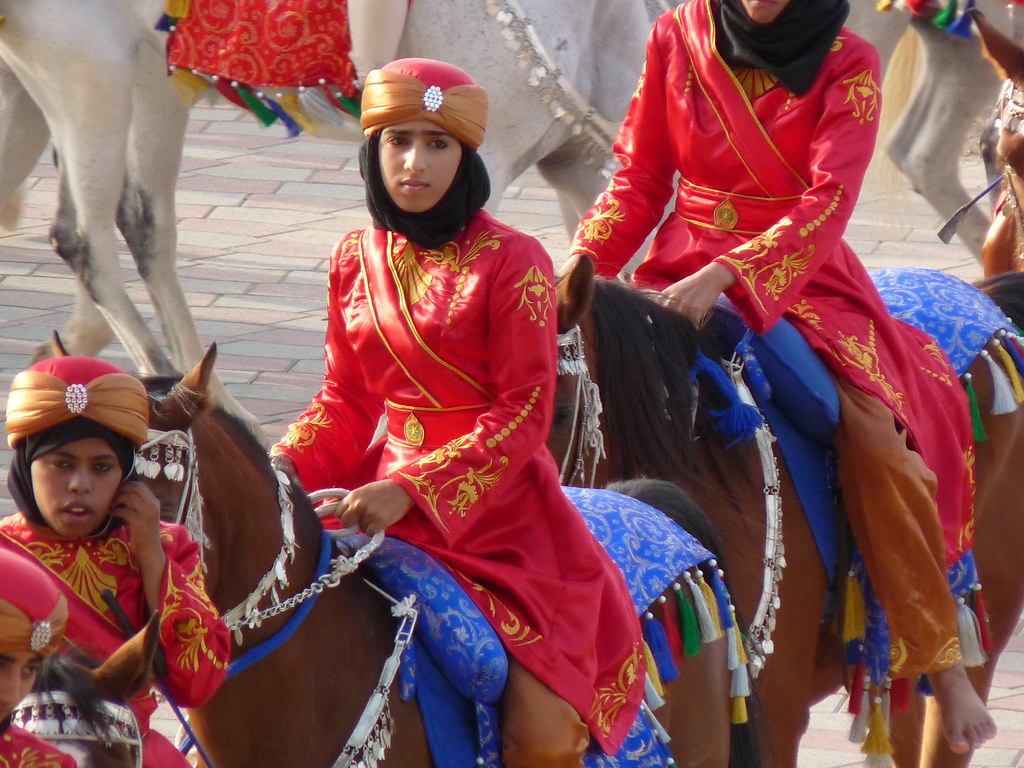 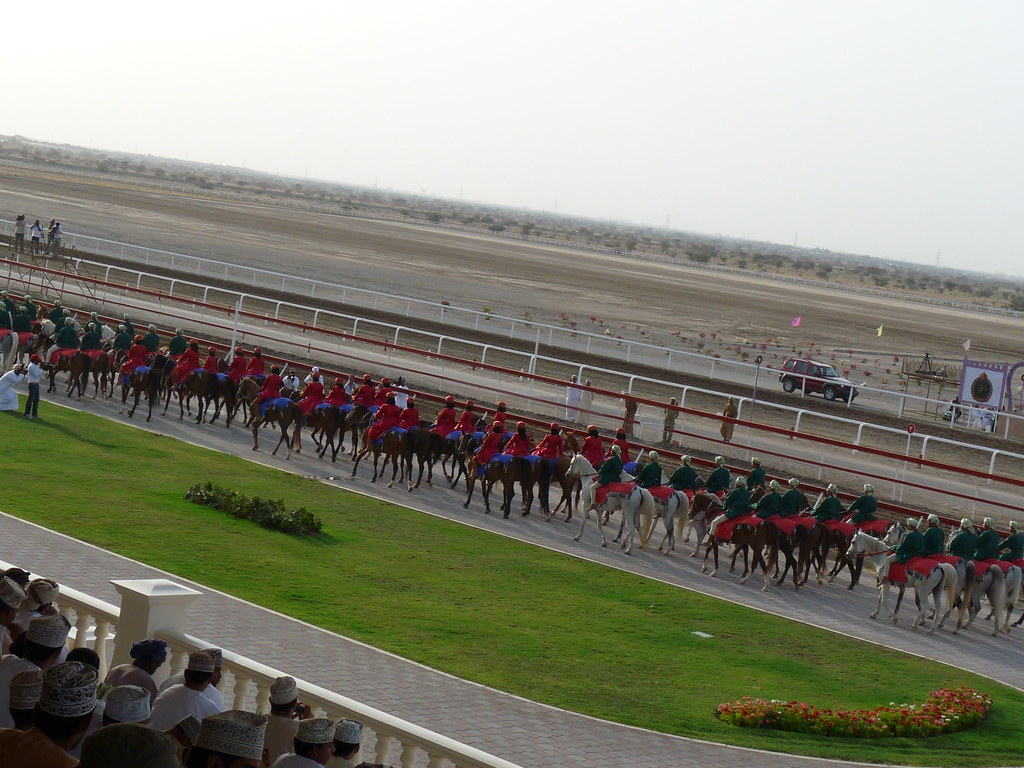