Earth Hour passed us by yesterday on 27 March 2010. The response from people, companies and countries had been heartening. I saw cities, after cities, turning off the light at 830pm their time. Perhaps there is still hope that we all find the strength and the steel in all of us to do what must be done.

To compel Governments to have the political will that can give our one and only Earth the chance to keep supporting all of us, our children both present and future, and the wildlife and biodiversity that are both essential and enriches our lives on Earth.

They kept dragging their feet because of the feared lose of money, profits, jobs and dreams and cannot agree on measures to limit our CO2 and carbon footprint.

Money , profits ,jobs and dreams are meaningless words without a viable Earth to live on.

We all do need to do more than turning off power for an hour as what we did on Earth Day and Earth hour.

We all might have to kick out all those rascal feet dragging politicians at Copenhagen and engage in getting true statesmen to give ourselves and our children a chance.

And allow a lease of life to our Earth, the blue fin tunas, the sharks , and corals , the great apes and preserve the diversity that weave the tapestry of life for all of us here.

I hope Earth Hour gave notice to them all that we all want them to heed the call and do what got to be done.

Or get out of the way.


During our neighbourhood walks, Riamfada’s flights had been more interesting during the last few weeks. I do not think I could attribute all that to the free flights I had allowed her. She probably would have done the same even if she had not done any of those free flights.

I got to know her parroty jokes would normally begin with an almost direct flight to me, followed by a light touch down on my shoulder before she took off immediately to continue on behind me. Or she would fly, also in almost a straight line to me and so close to me that the tip of her wing feathers brushed by my ear to continue on her way.

When she took off from my wife to fly facing away from me, I would see her arc back shortly later to continue in a zig zag manner towards me. I knew then she was not going on parroty joke and just enjoying the flights in a space much bigger than the space inside the villa.

So on one evening outside the villa walls, I saw Riamfada taking off from my wife 25++ meters away when I gave her the recall cue. Riam took off facing away from me and arced shortly after to my direction with zigzag flight. I normally would reel in the line to lessen the free line. Riamfada would fly so fast that no matter how I worked my thumb on the spindle, there always would be free line though of course, I liked to minimise free line available to her.

Seeing Riamfada was on a zigzag flight I thought she was not on parroty joke mood and thought she would be landing soon on me. So I did not thumb back on that reel as quickly as I normally would.

She came to me. To my shock, she continued on behind me. I reeled in as fast as I could cursing myself for being so complacent to allow her so much free line.

Then to my surprise, she must have turned around and touched down on my shoulder. I only had time to have this momentary relief in my heart that Riamfada came back wondering how could I have read her so wrong. When my wife excitedly came to me and told me what happened.

Just as Riamfada was about to reach me, a magpie flew across and behind me. Riamfada chose not to land on me then and flew on a few meters beyond me. Riamfada then did a ‘turn on a dime’ to face me, hovered briefly to see the magpie had gone off. Riam then flew back and landed on my shoulder. I was too busy cursing myself and reeling in the line to turn and looked. Neighbourhood flights had became so routine that we stopped taking photos of neighbourhood flights lone ago.

So sadly, no sequential photos of Riamfada’s flight that day. I would have loved to see what my wife described to me.

I think it must be breeding season for wild birds in Muscat. After all, the earlier cooler weather together with the rains triggered the trees and plants into growth and flowers and probably allowing insects and creatures to multiply into food sources for little birds. The birds in neighbourhood also appeared to be more territorial and had taken to buzzing us during our neighbourhood walks with kitties and Riamfada. The buzzing were not serious at any rate.

Last week, I was doing a recall with Riamfada about 45 meters away on the perch hold by my wife. Riam took off at cue and zigzagging towards me. When she was ten meters or so from me, I saw a pair of magpies who had taken off and flying earlier changed their direction and flew just above Riamfada. Those two magpies flew over me and Riamfada ignored my call to land on me and followed their flights upwards. Riamfada was powering her way to over take them. Why she wanted to do that I had no idea. Perhaps Riamfada was too full with herself and wanting to chastise them or wanting to be their friends.

I was too worried to care and reeled in as much as I could. Riam by then was 15 or more meters from me when her leash caught her in mid-flight and she curved around a lamppost and a short tree and landed on the ground next to the low wall. I ran towards her. I gave recall and she flew from the ground up to my shoulder. I hold her harness and released the leash to give my my wife to walk the rod/reel around the lamppost and tree to reel in the rest of the leash.

Riamfada was not spooked by those magpies. Those magpies were as big if not bigger than her.

But neither was I that pleased that Riamfada was spunky as to think she could take on a pair of them or want to be their friends. I rather Riamfada just ignore them.


Riamfada was then leashed up again. To continue with that neighbourhood walk with the kitties. Into the big overgrown garden of a nearby house without any tenant where she relished the sidr fruits in there. Recently we found that garden had a guava tree with ripe quavas. Riamfada just loved those guavas. 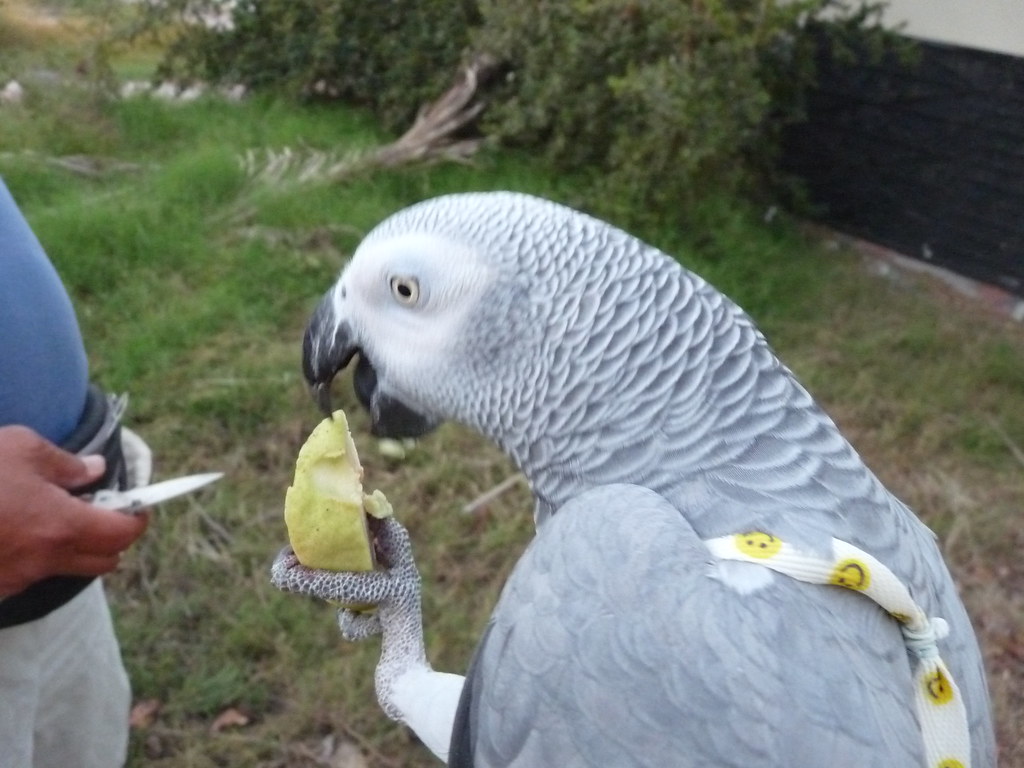 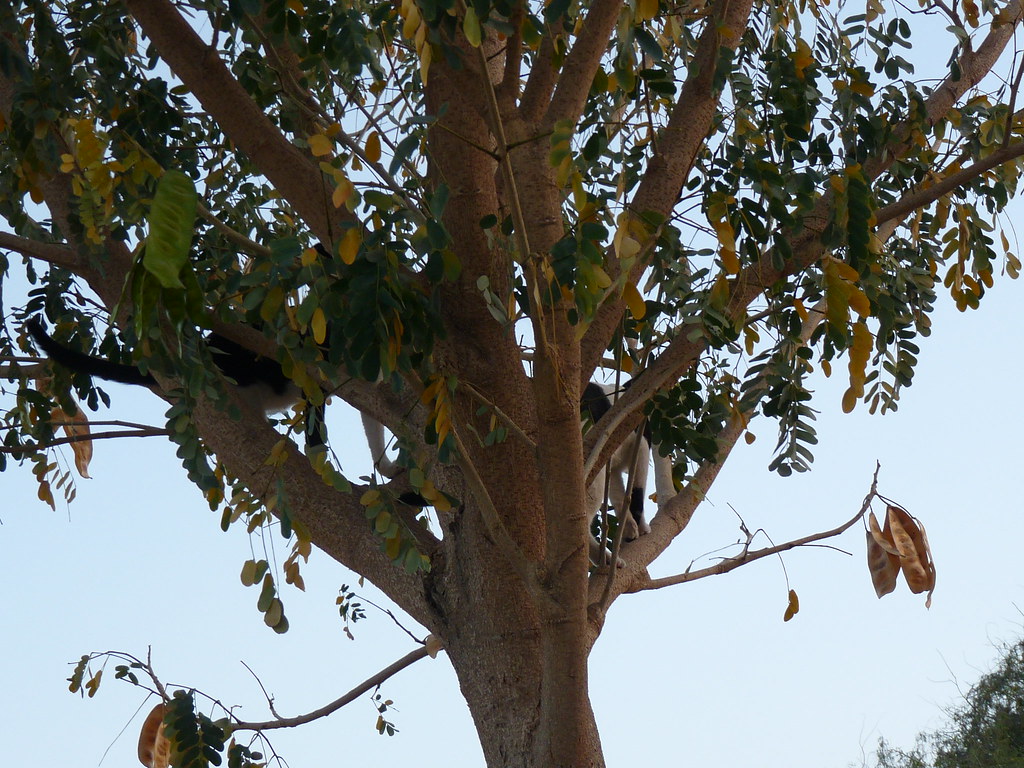 As written in last report, I brought Riamfada over to the Jabris on last Tuesday 23 March 2010 for them to look after for that weekend. 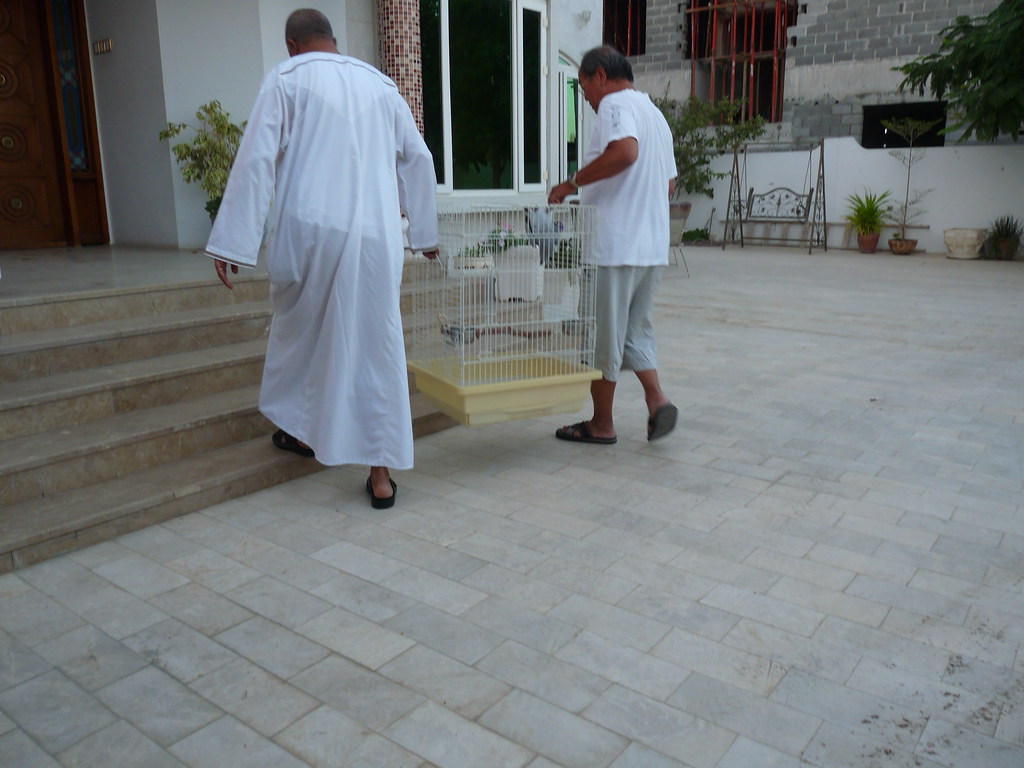 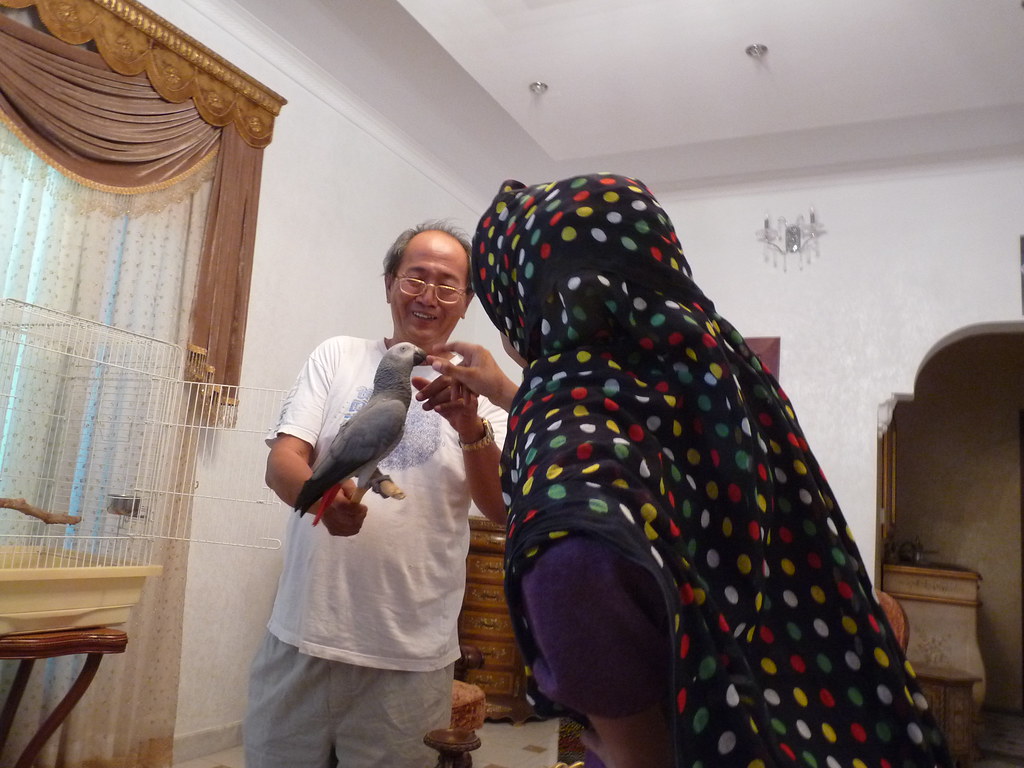 I also gave enough mash to last Riamfada for the 3 days that we would be away in Dubai planning to get her back on 26 Mar Friday evening.

The Jabris were so pleased to see Riamfada on Tuesday that I decided to extend her stay there for a week only taking Riam back on 30 March Tuesday evening. So it was clear that we were not using the Jabris just to look after Riamfada when we were away.

On 26 March Friday when we got back from Dubai, we went over to the Jabris with a baggie of frozen mash of about 200 grams for the next 4 days with them.

When we were away at another place, Riamfada was still missed somewhat but kind of cloaked over by other things that we were doing.

But when you are back home again, the absence of that little girl became gnawing and poignant. Made more so by the perches and stuff made for Riamfada all over the villa.

I extended that stay with Jabris to build on the love between Riamfada and the Jabris. I heard from them and saw in their eyes Riamfada was so nice to all of them that weekend. I declined their invitation into their house to see Riamfada partly as I wanted that stay of Riamfada to be a solid 7 days stay with them without distraction from having to see me.

Partly to minimise the pain in me not to have Riamfada for the next few days.

It felt strange the very next morning. To wake up and not taking breakfast to Riamfada. She was absent with the magic that came with having her around and her mischievious antics played normally at my expense. My breakfast was more leisurely and I had more time but that was no consolation.

It was the same when I came back for lunch where she would have joined me for a while.

In the evening yesterday when I got back, the hour for that neighbourhood walk came. Katie and Dommie went to lie by the garden door. I felt strange to do neighbourhood walks without Riamfada. I caved in when the kitties gazed at me. We took them out, using as excuse to see my wife’s car she rented from her driving instructor after she finally passed her 6? or 7? or 8? driving tests and gotten her Omani driving license.

We did everything the same way, using route we used in the past with so much pleasure.

Even the kitties did not seem to have the energy they used to have. It was a shadow of a neighbourhood walk.

I lost game after game of chess on the Internet including to players that I chopped into little pieces all the time before.

The next day, Sunday today, it was still bad. Breakfast and lunch felt lonely.

Except we both decided to ignore the kitties meowing away for their neighbourhood walk. They both could do that themselves.

My games of chess on the Internet was much better. And wrote this update as well.

I look forward to Tuesday, just two days from now when I will have Riamfada back in the villa again.

She better appreciate all that I am doing for her. Even if not, I think I will be spoiling her rotten when she is back with me again.