My wife has 4 digital cameras here now not counting her handphone which can take photos and videos. She must have bought at least ten digi cameras since that came on market.

She wanted yet another one. She told me this have zoom of 18X, and can take photos of the moon. I asked her why as you can get photos of moon from internet better than what she would have taken. And Armstrong already walked there before lust entered her father's heart and that gleam in her mom's eyes.

She snorted and then told me the camera has this super speed in capturing sequential shots of Riamfada in flight. Her existing camera sequential speed was not fast enough to capture the shots I wanted. One shot would show Riam on the perch and the next shot showed Riam flying in my direction.

So I told her to go buy buy buy that new camera.

So my wife now has 5 digi cameras.

We tried to take those shots of Riam's take offs from the perch.

We must be confusing her. It started with her facing me on takeoffs. Then when she turned and faced away from me, I cued her to 'turnaround' so she would face me to do takeoffs.

Then as related in earlier reports, the takeoffs she made when she did not face me were so much more interesting that my wife tried to shot them.

This are not the best, but might be interesting enough for you to see.

But first, here is a video of me harnessing Riamfada to take her out on neighbourhood walk or outside. You will be able to see how she bend her head readily and willingly into the head loop and how she cooperated in lifting her wings for the harness being fastened.


The video below showed Riamfada taking off while headed away from me. She then disappeared from the frame. Then a short while later, you will see her back in the frame and heading to me. The crucial turnaround was missing as my wife was hoping that she hopped backwards and flipped about in midair that she tried to capture.


Then here are fast sequential shots.

Riamfada obviously knew I was doing recalls. Even as I willed her to face away from me, she was half turned towards me in her anticipation. Still, you see how she leapt and turned in mid air towards me. I seen her all the time with the legs bent until I thought that their legs were always bent. It was in these series of photos that I first seen their legs straight and erect. 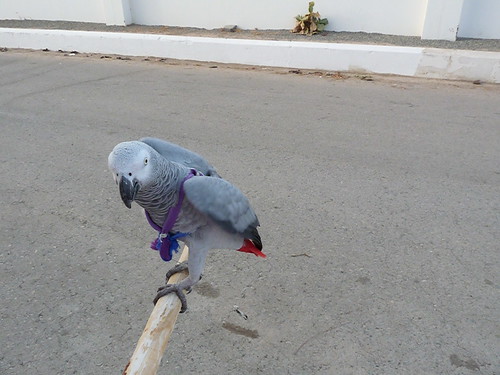 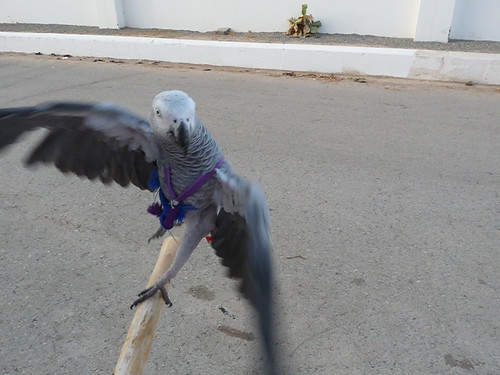 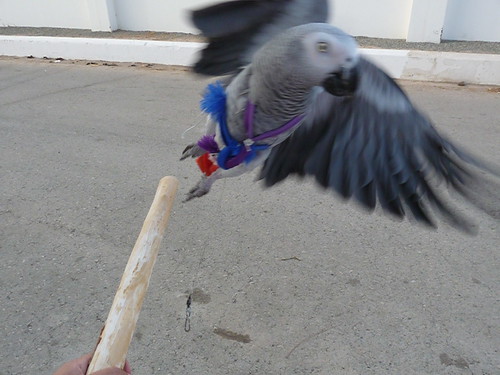 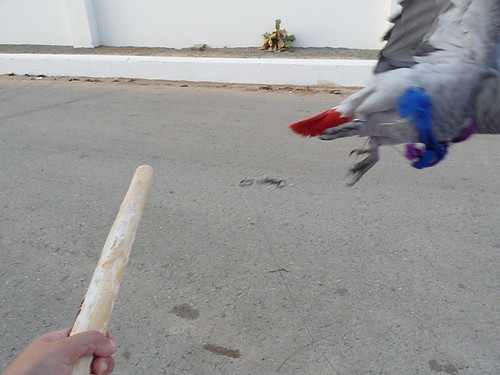 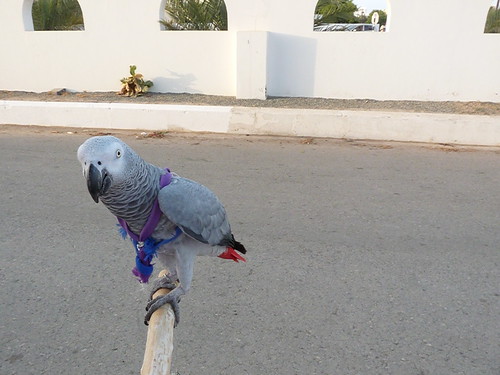 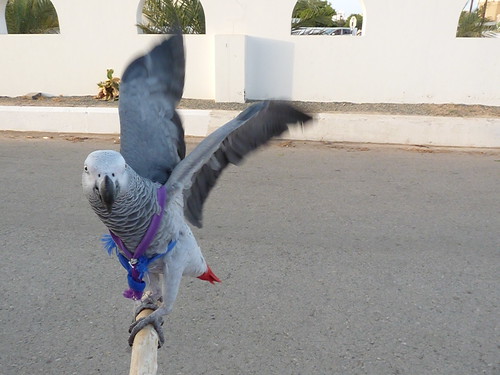 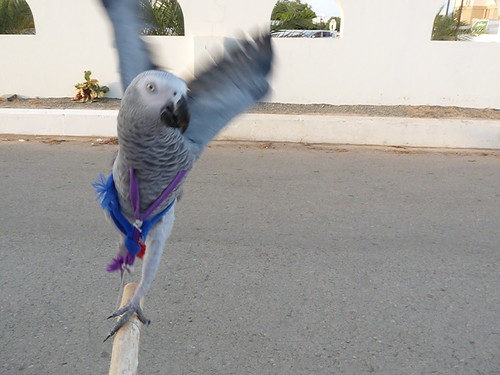 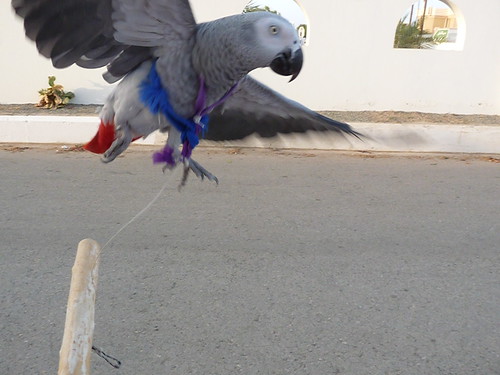 So many other sequences were taken, but above were the best.

And yesterday, we decided to take a break from taking photos and my wife did not take out her camera.

Riamfada then chose to do her completely backward jump and flip around to me. I could have sworn she did that as another of her perverse parroty joke on us and on all of you. 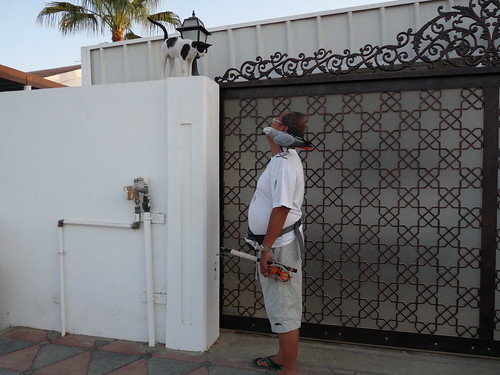 Dommie and Katie were up there. They were late in joining us and we closed the gates. So they jumped up there. But Dommie jumped down before my wife took the shot. Katie, 2 sandwich short of a picnic, remained up there and jumped down shortly after the shot.


Ever since that trip to Wadi Bani Khalid with the drive back late at night, Riamfada showed that she liked going out with us at night too. The way she looked around on her perch at back of the car with such interest that we took her out often during the night after the neighbourhood walks.

She joined us for dinners very often at our favourite places.

Such as as Darcy's Kitchen at Madinat Qaboos. All the dishes here are tasty and good and they have great staff and in very nice ambience. I was enjoying the delicious Japanese Sukiyaki Beef noodles 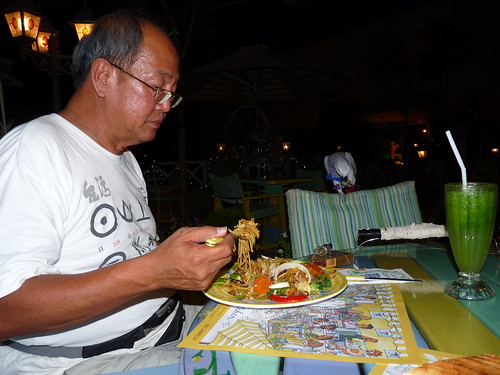 Dinner below was at Dosteen. The mutton kadai and the chicken jafrazzi the best I ever had. Riam enjoying a piece of fresh crunchy cucumber.

She is so different from Tinkerbell. Tinkerbell love human food and Riamfada not interested at all in human food. I would have love Riam to eat a bit of fish, chicken, pawn etc as a bit of animal protein is good for her. 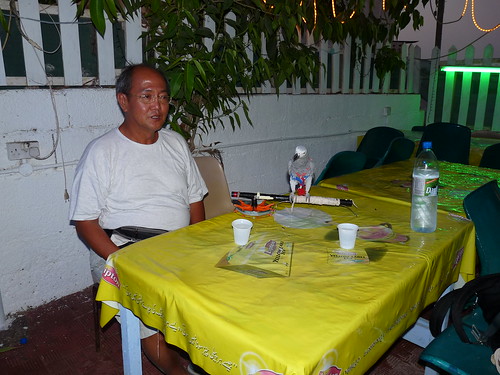 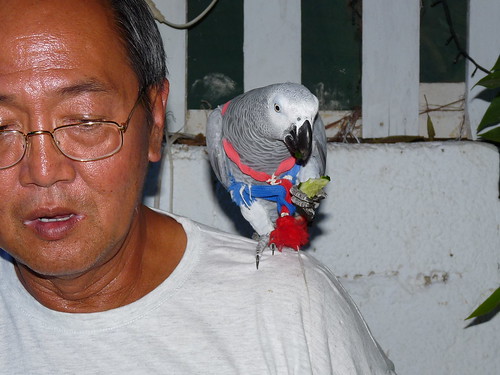 Over the last week, I changed some routines. I used to go to Riam's room to get her bowl in morning and during my lunch, washed and put mash and placed the bowl back to her cage in her room. Of course, the cage door permanently open in her room. Then after I have breakfast/lunch in peace and with Riam having her breakfast/lunch in peace, she would be brought to living room to be with us.

I decided to allow Riam to be on my shoulder. So she could come with me to the kitchen, see how meticulously I cleaned her bowl, put mash in it, raise to her beak so she could have a bite and her approval and then walked back to her room to place her and the mash in cage.

All went well the first few days. Then she thought of better things to do than to be on my shoulder to watch all that. She flew to kitchen counter, or flew past kitty when they are on kitchen counter to dive bomb them off. She developed an affection for the counter. She nosed among the soya sauce and chili bottles and scratch about as if looking for a nest.

I laughed good naturely. Then when taken out after breakfast/lunch or even in evening after neighbourhood walk, Tink love to fly into the kitchen instead of the ring, or bar, or other named perch.

SO it was this morning when I took her after breakfast from her room. Instead of flying to the perch in living room at my cue, she flew down the passage way and turned right into the kitchen and on the counter.

As I took her out of the kitchen, I closed the door.

She did not fly to perch as cued. So I got to the perch and she did step up.

At 'come here', she stared at me. Then I cued her to fly to the ring. She looked at me, turned her head to look at the ring and she took off. She flew to the ring, then around the ring, and flew to the kitchen and hover a couple of seconds outside the closed door. She then broke off her flight to fly into the dining room where my wife was. I heard her wing beats and was told by my wife she did a couple of rounds in that room. She then flew out and down the passage way and buzz my head to land on the ring. I gave her a sunflower seed as peace offering to have her take it and drop it on the floor.

At my cue to fly to the perch, she took off from the ring, flew around the living room and headed down the passage way to dining room. I heard my wife called out as Riam flew pass her that Riam flew back into her own room.

Then Dommie threw tantrum forcing me to walk in mid day sun in Oman that even mad dogs and Englishmen will not do.

Now Riamfada got into a huff and cold shoulder me. Perhaps because I refused to let her to the kitchen this morning. Perhaps last night she was not taken to dinner with us as we tried a new restaurant at Al Khoud, an upmarket Iranian restaurant for the first time.

I came back from lunch today.

Riam still in huff and refused to any recall cues, ignoring me as if I was a fly on the wall.


I declined to show the shots my wife made of the moon much as she was pleased with those shots. You can download much better shots of the moon from the Internet

If what I wrote help you and you like to help, give a thought
for the wildlife sharing our planet.
Do write that cheque to Gerald Durrell wildlife trust
http://www.durrellwildlife.org/

or to any wildlife conservation body of your choice