So here I am on a working day morning (In Muscat, Oman, Thurs/Fri are weekends) at home over this laptop instead of in the office.

All because of my malicious Kathy (photos of horrid Kathy, with equally horrid Dommie in http://www.flickr.com/photos/shimmertje/sets/72157606906937927/detail/).

Last night as I was stepping out into the patio, Kathy was wickedly weaving figure of eights about my ankle doing her best to trip me up to break my neck.

I widened my step and she rushed ahead, and my right foot was about to descend on her head to crush that to a pulp. I recognized that as a classic ploy from her to use one of her 9 lives to cause me to slip. So I widened my widen step a bit more to foil that malicious intent.

And I lost my balance that I tried to regain by swinging my left foot around to catch that by the door. Except instead of catching the door, I caught the edge of the door right against the Achilles tendon and got a cut.

It was painful. So painful that visions appeared for a while that I be in Muscat Private Hospital with two of my colleagues already in there.


And she just looked at me. Not the slightest bit of regret could I detect in her eyes. She looked so pleased.

I was going to kill her, and another of her life went down the chute.

I told my wife to withhold Kattie's dinner for that wicked malicious act she did on me.
She went on to feed her. She claimed she was feeding Dommie, but she did not prevent Katie from eating. Dommie even stood by to let Katie eat first.
She stuck a small pink plaster with cute Japanese Pokiemon faces printed on it. Not even a new plaster as she proudly told me she bought that 10 years ago.

Gone are the good old days where wife stay 10 mincing steps behind and all words from husband and lord to be taken to heart and instantly carried out.

I called the office to tell them I could come in sandals but that violate the dress code. My boss was stuck in the most humongous traffic jam and he told me to take it easy at home.

Then to add salt to injury, my wife went on to feed the catties breakfast even ahead of getting my coffee and ham sandwich to me. She vehemently denied that those were her familiars, but I have my suspicions.

This is to put on record in case strange things happen to me, you can help seek justice for me and bring woe to the perps.

I like to bring you all up to date with us in Muscat.

When I first came here, and after the initial stay in hotel, I found and moved myself into a furnished apartment in Al Ghoubrah signed on a 3 month lease. I decided that a more permanent place should be agreed to by my wife before that lease is signed.

My wife joined me here two months already. But then, with the 2008 Olympics , and financial tsunami, and other stuff of settling in, I had not the energy to update this as often as I wanted.

The photo below showed the key reasons why, Internet chess, DG books and beasties. 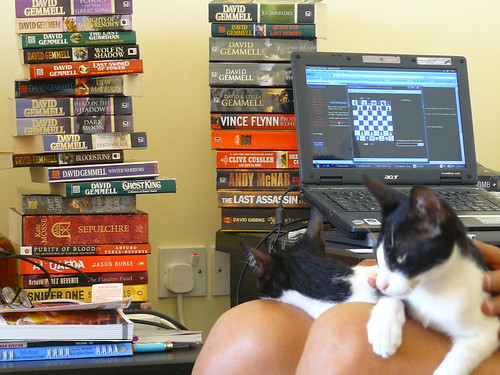 Dommy is kitty looking at you and the other is Katie looking at some of my DG books making up her mind which to chew.

While they look like kitties and meow like kitties, I suspect that they are aliens in disguise. And of course, they are on my knees.

I finished all the DG books, including a stack of them brought to me by my wife when she came here. If you like good books, do read DG. Start with his Rigante series.

My wife and I roamed about Oman, to the stark majestic mountains inland as well to the coast down to Sur. We covered a tiny fraction of this rugged beautiful country with so much more to go to. You can see photos of our travels and life of Oman in her Flickr.
http://www.flickr.com/photos/shimmertje/collections/72157606906593269/

And of course, she wrote of that in her livejournal here
http://shimmertje.livejournal.com/2008/09/

She can write and write , so those with insomnia and without good DG books can go there and read.

Just before she came to Oman 2 months ago, she visited Yingshiong on early Aug 2008 and her report is here
http://shimmertje.livejournal.com/282030.html

Some time back in Dubai, falconry was widely practised there and falcons were for sale. Here are a few photos from that time. 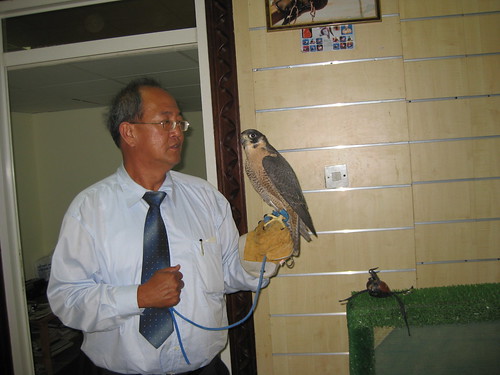 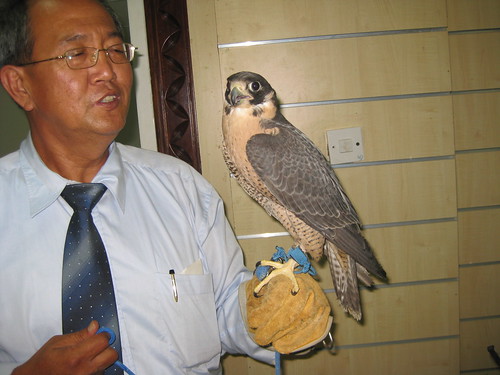 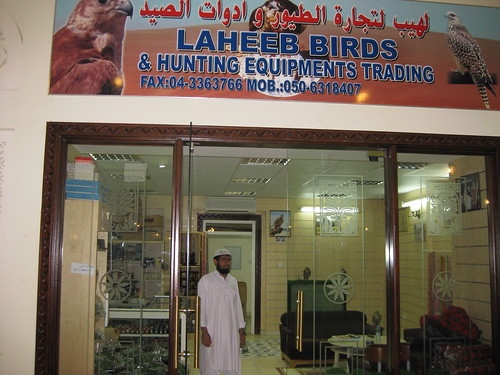 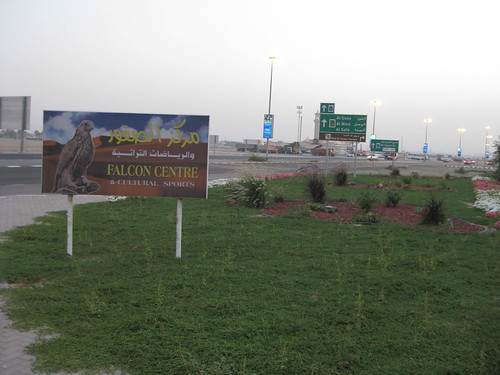 The falcons were gorgeous and majestic in their beauty. But then, the property prices in Dubai were so high that I could not have afforded a villa to own a falcon properly.

In Oman, the cost of leasing villa is much lower and well within my reach. I knew Arabs have this strong tradition of falconry. I seen falcons for sale in Riyadh and in UAE. I had this thought of having a falcon for companion and not just for hunting.

So in Oman, I checked and checked and was surprised to find no falcons or falconry practised here. It turned out that the Sultan of Oman is a strong conservationist. Arabs with falcons from UAE and Saudi Arabia descended onto Oman like an army and ravaged the nature reserves. Even worse was done with guns.

So the Sultan here banned falconry and hunting to conserve the local fauna.

Even while I regret that I was unable to get a falcon here, I have to applaud the sentiment and the basic aim of the ban on falconry and to wish the Sultan and Oman well on his desire to preserve the little thats left of the wildlife here.

I have been to the bird shops as I have settled in. I found that there was a ban set in place 4 years ago on import of birds and parrots. I had yearned for either macaw, (BG or Scarlet or GW) and/or Electus. None were to be around. There were IRN and Greys. I find it difficult to buy grey from the shops because of my Tinkerbell. At any rate, none of the grey touched me in the heart.

I left word with vets and friends in case that expat who must leave Oman and unable to bring their birdies with them like to settle a deal with me. I hoped to get my macaw or Eckky that way.

My 3 month lease on apartment was coming to an end.

We were house hunting and at the end, we found a delightful villa in North El Hail that suited our needs. Many of the villas we had seen were built in the Oman style. A complex arrangement of small rooms geared to seregating the females from the males. Nice if you have a harem of 3-4 wives, but I do not have 3-4 wives. One is already more than I can handle.

The villa was in Western style, roomier and more space. That had 3 bedrooms. We accepted that and moved in early Oct. We had to buy furniture and we got sensible sturdy hardwearing stuff. Able to bear kitties and birdies that we learned from our experiences.

We do not have to care about badly treated furniture anymore as that will be our furniture.

One of the bedroom will be dedicated as our bird room. That was about the best bed room with windows on opposite walls. That also allow a crossflow of air.

This will be the room that the bird will be kept and trained in before graduating to the rest of the villa.

But why do I resume this blog?

My friends and collegues here know of my attachment to birds.

Yesterday, a note was sent to me by RC. An expat here, Ms JD found a parrot and trying to track her last caregiver.

I called Ms JD. We spoke and we met later that day.

We felt it best to try to find the real owner to return that parrot to. But failing that, JD liked the parrot to go to a good home and be looked after well. She said she had been to Tinkerbell website. In her earlier equiries, she was also told by other of her friends of me.

She would be keeping that parrot over the next couple of weeks. If the earlier owner cannot be located, she might wish to appoint me as the caregiver. We had a good rapport in our hour long meeting and going over some hard prints of Tinkerbell and Yingshiong.

It might be possible that she be attached to that parrot herself, in which case I still will help her all that I can.

That parrot had no identification ring and therefore , no papers. Even with papers, I am so aware of the difficulty of taking that parrot with me later. With no papers, no hope at all. It will be another emotional and painful goodbye.

While I liked macaw or Eckky, neither can I, or will I turn away a rescue should it be decided that parrot come to me.

Over the next few days, I will set up all thats required in the bird room be it for this rescue or whatever that come my way.

I will start the process of Tinkerbell mash. Some will be presented to Ms JD, and if she wanted to keep the parrot, I will give her all the mash.

I deliberately do not say what parrot that was for obvious reasons until the right time.

But I have the name already. That came from one of the character of David Gemmell books.

In time to come, you will know if Riamfada lives and fly with all of us and get to travel with us all over in Oman.