I looked forward to today from last night.

This was going to be the first complete day that Tinkerbell would be entirely be
just with me. It was tough to achieve this. Yu, Shi and Wu and almost all
of the temple committee were going to to to TaiChong sister temple and strong persuasions
were exerted on me to join them. If so, I would have to leave Chiayi in early afternoon.

Tink could be with me, but then the thought of yet another temple dinner, marvellous as the
food coud be and entertaining as the show could be, meant Tink would be out until 10 pm or later
depending when we all got back.

I had to fend and fend off. I truly enjoyed all their company. But with so little time left, spending
an entire day with Tink and Tink along was higher priority than they could have realised even though
they all knew how much she meant to me.

I also had to firmly wired the kids of Yu family into the Internet and to make sure they understond
and could do the downloads from camera to PC and the upload from their PC into Internet. That
really had to be done even as I realised the price I paid to get that done. That was in the evenings
when Tink was at her lovable best. She liked her headrubs mainly in the evenings. As I was sitting
with the kids in front of the PC, from the corner of my eyes, I would see Tink flying down from the
bookcase to Mr Yu, walking slowly to him with head bend for headrubs. While I was happy for her, and
for him, I wished I was on that sofa with him and her offering her head to me too. But now and then,
she would take off to fly past me and brush the tip of her wings on my cheek and ear. Nothing
of Tink was ever accidental, everything done by her was deliberately done. Those moments when she did
fly pass ear rubs on me were some of the most exquisite moments on her part to me.

It was a beautiful day, clear skies and nice sunshine.

I reached her at about 915am. I was not just lolling in the big hot pools and swimming pools of the SWN
forgoing time I could have spend with her. I was doing all that and going through in my mind and reliving
the moments with her from the day before.

We rode down to the mee ger place for breakfast and to say goodbyes to the owners there. We then went down
to the bird shops area in Chiayi to pick up a couple boxes of Nutribird P15. I trust my Tink Mash (from
Mikes Manna Mash) much more, but if Tink Mash was not to be used, than I rather a commercial
parrot food. I established clearly to them that Tink would take pellets if they resisted overfeeding her
on bread or other food from table. And commercial parrot food were fornulated for all trace elements and
amino acids and minerals.

My departure date from Taiwan would be on 9 November. That was as my wife will leave for UK on 8th and I
had to be back to look after YS who could not be left by himself for too long a time. That was why I
understood the delimna of Tsaoling Lin who had to let his birds go. But on the other hand, his birds had
always be going off returning on when called. So it was likely all those birds were still around but
had not been back to him as yet with the exception of that owl.

We were slowly going to other regular shops I ate or drink from to say goodbyes till the next time I would
be in Taiwan again. 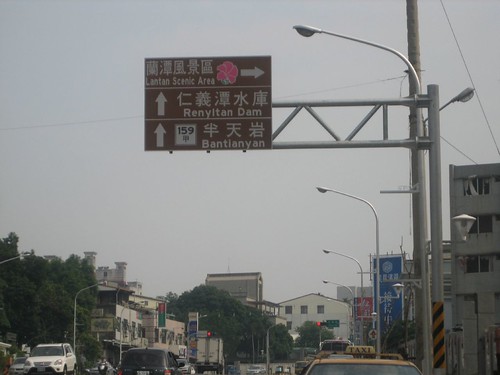 The mountain revealed itself from the haze as we got nearer.
I bought a biantang or packet lunch and lots of drinks to the pavilion beyond BTY. This was one of my
favourite place to get to in the past and present. From the pavilion, you overlook high above Chiayi. Thats provided the air was very clear that day. I set the camera to take superfine shots to have greater clarity. So
I would get the haze and disappearing distance in greater detail. Felt kind of corny to me. 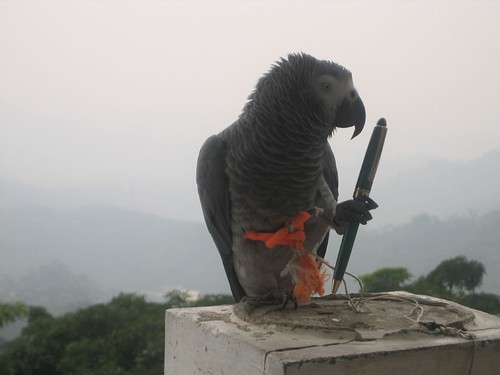 when her beak could not conquer the pen, she then tossed that over and down 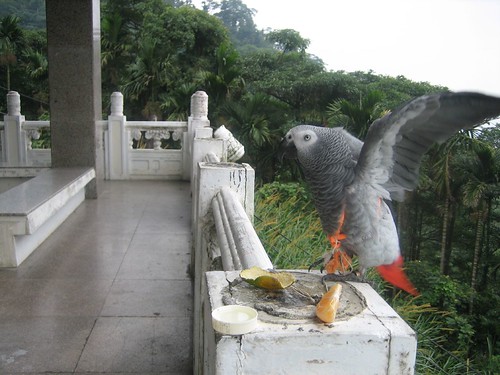 There were this elderly couple who were in that pavilion when I reached there. They were so well equiped for
such outings with comfy camp chairs and stove and food and even with the camp equivalent of kitchen sink. They
kept to themselves in their own world with a tiny transitor radio with volume turned way up.

I allowed Tink some of my lunch. As usual in such outings with Tink, her line had enough free play for her to go about and fly to me as she liked and did from time to time. The bright sunshine of the morning had turned
into hazy day and eventually into overcast skies. The temperature dropped and if there was a day when autumn
arrived in Taiwan in 2006, it was on today 7 November.

That couple left eventually. We stayed and watched the comings and goings of other people. Now and then,
short recall games were played with Tink in between taking of photos of sweet Tink. 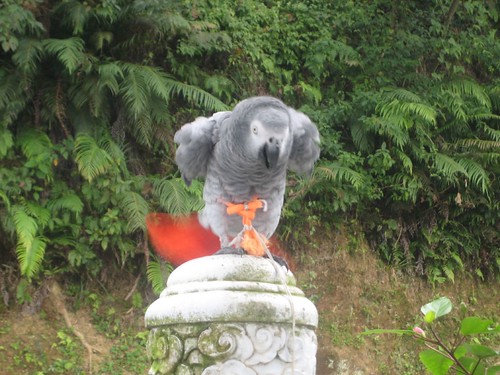 At 4 pm, it was time to leave that pavilion. We went to the temple complex at BanTienYen with that big stature of Goddess of Mercy KuanYun holding a lotus with her right hand and the celestial pearl with her left and
dragons coiling at her feet. 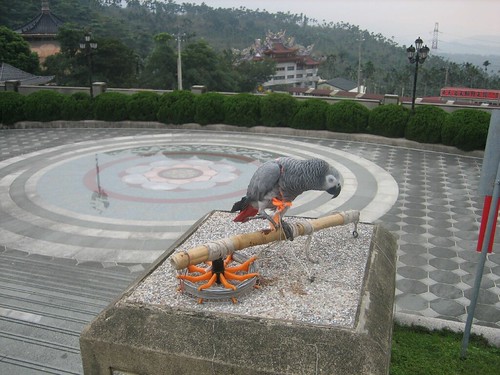 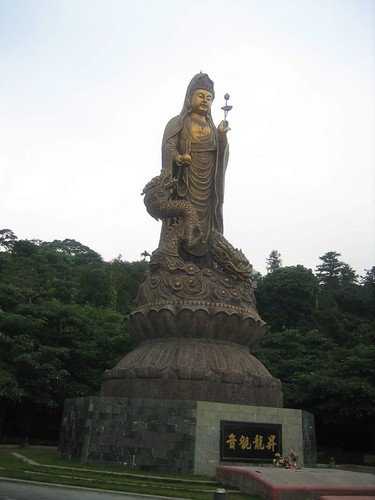 Longer distance recalls were done here. I trusted myself with Tink and the camera enough to try to do both
of that together. Recalls were done over distances that ranged from 2 meters to 30 over meters. She recovered
enough of her flight form to do some wonderful flights. She came to me from 20 meters at instant of cue given to me. Then she veered off, maybe from sheer joy to do a circle above before coming on back to me. So you
see the video of her in flight to me, than of the ground as I feared momentarily she was on a spook and slightly
panicked to point the camera to ground. I had enough faith in her that in the next flight to me, I kept pointing the camera in video mode at her even as she flew past me. She did a wide circle before getting to me.


longer recall with flyabout and break to return to me. Listen to the line screaming off the reel pulled by Tinkerbell


Not all were flights. I tend to get her to relax with beak rubs and for her to do her thing after every two to three flights. I felt so relaxed and wonderful with her and I knew she was relaxed and wonderful too and
she enjoyed the flights as well as the preenings and soft talks I had with her. Ciggie boxes were sacrificed
for her chewing pleasure. I had little nails left. I could no longer open flip top cans and had to opened
them with aid of the bike keys.

Even as I knew she was not spooking , her overflights beyond me and exuberant flyabouts raced my heart. I just
could not put passed me that big spook that she did a couple days back. I also found a nice way to distract
her as I tried to put greater distance between us prior to recall cues given. I gave her ciggie pack to chew.
I talked to her and as and when she chewed with such enjoyment that her eyes closed, I hurriedly step back keeping constant sight of her.

She eventually wised up to my tricks. The enforced stay I tried on her wore thin and eventually I gave up attempting long flights with her.

Some of those praying there caught my eyes. One had this very intrique praying ritual which involved elaborate
hand weaving in air. Then she went into a whirling mode, of such long duration that I did not try to capture all of that. She was almost like one of those whirling dervish and I waited in fascination if she would drop. She did not.

Darkness was setting early and by 5pm, we headed down the mountain into Chiayi city for what I felt might be
my last dinner at this beef noodle place I liked so much with Tink. And to say goodbye to that proprietor.

I reached Yu house at 630pm. It was getting colder and I stuffed Tink with little protest from her into
carrier cage to get there. I walked the kids through uploading of photos from camera to PC and from PC into
Internet. This was the major explanation to temple committee why I could not join them in excursion to sister temple today. You folks also know Tink was THE major reason, and not mentioned by me.

I also wanted to get the kids liking the Internet, and as a way to draw them into our English world.

They will be the future conduit to keep us all posted with regular photos of Tink even if I am not in Taiwan with Tink.

Even before I could get back to Singapore and major photo postings, the URL above
showed the photos when I saw Tink on my first day in this trip and some of photos just
taken by Yu's son YeoMing of Tink as she preened before flying down to me for headrubs.