It was at 920am when I reached Yu's house. Tinkerbell body strap was a bit too long.
I made another just a bit shorter so her claws would not catch in it. I was pleased
at the result. I noticed this earlier, but procrastination got the better of me.

Yu and the two of us started off to Tsaoling shortly after that. As his car pulled
into Meishan towards Tsaoling, we could see the Alishan mastif through the haze. Clouds
wreathed the mountains. I might not know the roads in Chiayi the way he did, but I knew
my mountains. I reassured him not to have the slightest worry. Where we were going to
might be much better, or might be much worse that what we currently saw. I told him
we would be going up and down two mountain ranges before we get to Tsaoling. What we
seen then would not be any indication of what we would get in Tsaoling. Especially
as it would take about two hours to get there and hence two hours later. I recalled
bright sunshine there turning into black heavy downpours within half an hour, and then
changing back to beautiful day within the next half hour again.

This was the same road to lead also to LungYen or Dragon eye. It was marvellous to be
on this road again especially as I did not expect it. I was glad for his offer to
drive us there. But anyway, he already knew Mr Lin of Tsaoling after I introduced
them to each other in Tinkerbell Revisited in June/July 2005.

The highest point was at the junction of the road with the turnoff towards Dragon Eye. The
clouds broke and we entered sunshine while heading down having passed a ridge. We detoured
off that road towards JiangHu. That was another beautiful place and I thought I introduce that
place to Yu and perhaps he might bring the family there another time. There were few people
here. Especially as it was a monday. Tink attracted attention, especially as I put her
throught her paces that she responded to so beautifully. 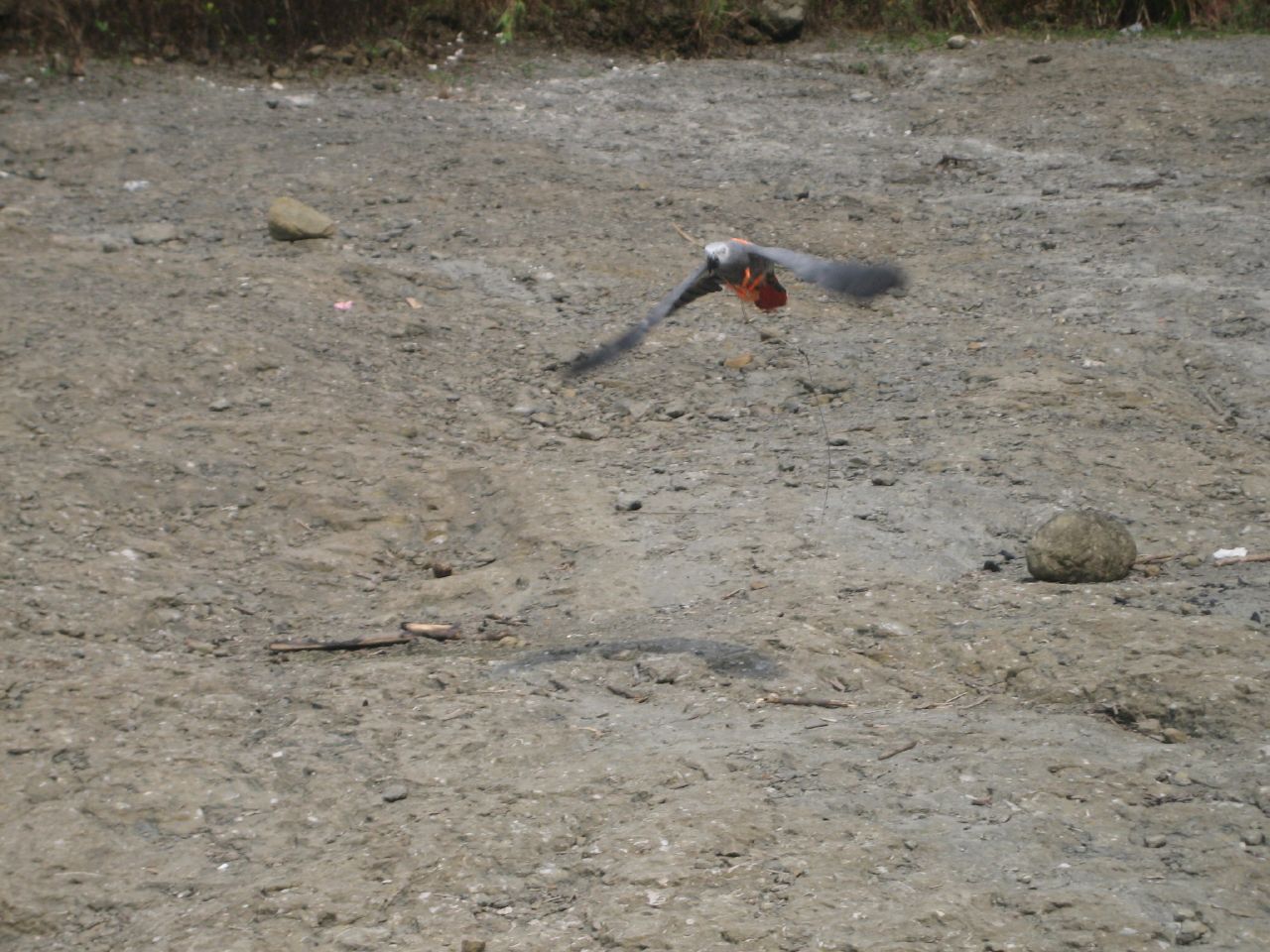 A guy came up with polite request
to have his photo with Tink. He appeared to be about 30 years old. I was happy to obliged him
even to place Tink on him.

He turned out to be from Chiayi as well and was staying in the same area I stayed in when
I was living in Chiayi. I asked if he enjoyed motorbike ride to this place. He laughed and said
he drove exclaiming that was too far and difficult and uncomfortable to get to on a bike. I grinned
and nodded my head. I hate to tell him the many times I rode my bike to this place with my wife
and Tink and to places many times further. I guess to each their own masochistic ways.

We made our way back to the road to continue to Tsaoling. It was a long winding road down and
then another long winding road up again. I was wondering how I did trips like that in the past
on my tiny 135cc Tink Mobile with my wife and Tink.

We stopped for lunch at Tsaoling before driving to Lin's house. I was sorry that his wife died
and wondering what appropriate words that I needed to say when I meet him.

It was a real pleasure to meet him again. Then a cheerful looking woman came along and Lin
introduced her as his wife. I was at a loss for words for a while. He told us that his wife
had a massive stroke. I was happy for her that she passed quickly on and not in pain.

Lin told us he was in China for a while making the arrangement to bring his new wife over. Since he
was in China for over a fortnight, he arranged for the babblers and other birds to go back
to the wild. I understood that kind of arrangments.

In such meetings, chinese tea was brewed and served. He was also into and hooked into the Internet now.
In between drinking tea, I showed him the shama Yingshiong photos and videos. He identified that bird
immediately and smiled with delight at his photos and videos. I told him I owed a debt to him
as I would not have done that if I had not met him. I showed him on the Internet the website of Tinkerbell
that he had not seen before. And the photos of our meetings and his first wife. Unfortunately, he
had not gotten to making a email identity for himself as yet. He saw the acknowledgements I made to him. 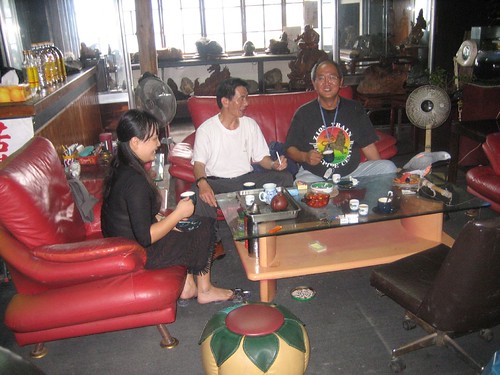 His new wife from Hunan, Mainland China was more savvy with the Internet. So I explained to her
the various sites and how to use Altavista Babelfish to translate my webpages into chinese.

Tink was left on her reel perch with free line for her to come to us as she wished. She was on another
table, with Yu sitting nearest to her and me furthest from her. She could not resist the groups of us
and the tea were were drinking and the food we were eating. Periodically, she took off to fly
to Yu for tea and food.

I admit to a tinge of sadness as I saw her did that even as I was happy also for Tink and for Yu.
I was thinking how good it would feel if she flew to me as well. Tink then looked at me from her
perch, and took off to overfly Yu and landed on me. I was touched. Warmth welled up as I received her
on my shoulder with pleasure. I offered her tea that she pushed away. I offered her a small
piece of chicken that she pushed away again.

I felt embarrased that I thought her to be so mercenary in the first place as she perched and preened
herself on me periodically nuzzling and nibbling my ear. It was such a wonderful feeling that she gave
to me that I felt embarrased for my earlier tinge of jealousy.

As I expressed my sadness to Lin that he did not have any more birds now, he told me that he still
had one but it was not currently in or around the house now. That he had an owl which still came
back to be with him except that would be later on at night.

It would have been great to see his owl. But it was getting late. Lin and his new wife were so
hospitable to us and we all enjoyed the company of each other and it was time to go.

We reached back to have dinner cooked by Mrs Yu. Tink was of course released from her harness upon
which she flew to basket on top of her bed bookcase to preen herself. Periodically she flew down to Yu's shoulder to get titbits. Yu had enough restraint to offer only morsels of meat now that she accepted
veges as well. It gave me pleasure to see her periodically fly up to the bookcase to eat the dry
food I left there.

Tink then flew down to land on me to drink from my cup. I told her that I like to give her headrubs.
She slowly bend her head to allow me to do that.

Then I brought MeiMei through the steps to upload photos from the PC into the Flickr account set up for her.

Tink was on her basket bowing her head down when I approached her to say goodnight and goodbye for the day.

That took me into this Internet station in ths cybercafe in Chiayi now.