So here I am again in the Internet cafe of Chiayi at about 11pm
making this entry. And before I go spend the night in the sauna.
(just what is a Taiwan Sauna - go read http://shanlung.livejournal.com/11261.html)
I resisted the kind offer of Yu (that actually sounded like Yeoh
because of edicts from IPA (read http://shanlung.livejournal.com/14318.html) to
stay in his house as his guest.

I snore and I love the saunas here.

I thank all who wrote to me in forums and privately for their lovely support
that I am unable to reply to. I now do not know why I was so tensed and
with my heart beating away so loudly the last couple of days. Fear of rejection?
Fear that Tink forgot me? Fear that relationship with Tink was a one way imagination?

After all, Yingshiong snubbed me for 3 days after 3 month absence. The last I saw
of Tink was way back in July 2005.

Yesterday no entry was made. Part was early morning procrastination resulting in reaching
Singapore just in time and therefore no chance to log into Internet. Then after a 4 hour
flight into Taipei, bus ride from airport into Taipei and futile hunt for English/Chinese
books for SanSiang (Yu son) to drag and cement him into the English language so he can do
daily updates for me, I was hit by the fringe of Typhoon Cimaron. I did the best thing
which was to make bee line into a Taiwanese sauna for the night.

This morning I had a most delicious dumpling , HsiaoLungTangPow (literally small dragon soup dumpling) 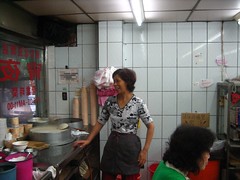 with salty toufu soup. This was almost traditional Sunday breakfast with my wife Joy when we
were living in Taipei. The proprietress remebered me, my wife and my son who occasionally stayed
with us and that I tried to arm twist in getting at least a Taiwanese girlfriend or two.

Then took a cab to the KuoFuChiNiangGuan to say hello to my old taijichuan master who was still
leading a group of others there. After that, it was to the Taipei Railway Station to catch
the train to Chiayi. Mr Yu and wife told me they would pick me up.

It was bitter sweet moment when his car pulled up, with Tinkerbell on her old ring perch swinging
in the car. No sign of recognition on her part which did not do my pumping heart any good. I talked
to her with her not giving any sign at all to me. Then later, we pulled up at a stall for lunch of
cold noodles and other titbits that I will not describe here, I asked her to step up. She did that.
Such a simple move, and I relaxed. She made no other move but just stared and stared at me. 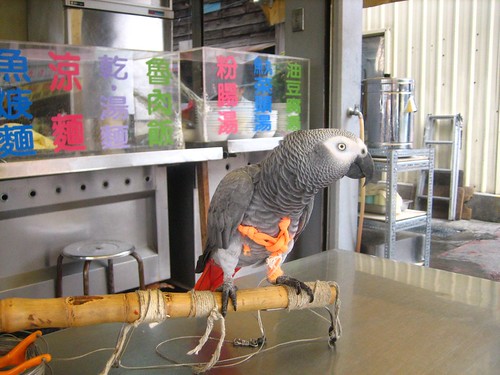 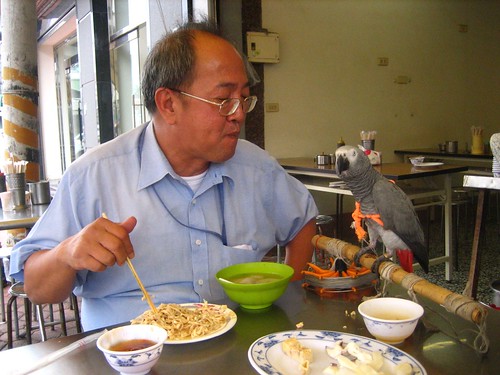 She was still my sweet Tink that I felt in my heart. She refused headrubs, but then, she normally
refused headrubs until evening time. A soft call of ' beak rub' to her got her bending her head and
pressing her beak to my finger for her beak rubs, while being fed noodles and titbits from both Yu
and me.

The old Tink Mobile was at my disposal with Tink. But with a slight drizzle from fringe of
Typhoon Cimaron (very late passed the normal typhoon season, but then with global warming, what
more can I say), I declined that to spend the rest of the afternoon in the pineapple and rice fields
around Yu's factory. So while he was doing his sand castings, I took Tink out.

Tink had a new harness made by Yu. That was too tight for my liking unlike the beautiful harnesses
I made and left for her. But for that time being, Tink was with me.

Then I knew she remembered me. Yu told me she had not flown to him for recalls since I last left.
I felt so empty handed with no treats for her in her special Tinkerbell treat box that I always kept.
A soft call from me got her flying to my shoulder, and a tingling nibble to my ear, and a chew on my
glass frame. Just like old times. Her treat was beakrubs and gentle words from me.

I placed her on the railing next to the drain. She flew to me at first call from 3 meter, and got her beakrubs.

I did that again, and tried to move further away. She would have none of that. She powered her way to me
as I stepped back from her. I saw her preflight posturing. In the past, I would counter with a 'hold'
sign to make her stay for me to move back.

I just could not do that. I love her to be on me as much as she loved to be on me. She was glued to
my shoulder. When we walked back to the factory, I told Yu that perhaps she did not like the drizzle
to stick on my shoulder. But even in the factory, she declined her normal perch on the basket taking off
to be on me. Then she started to nibble on my finger nails. From the long neatly manicured nails of Yu,
she did not do that to him.

Who cares if she got to the quick. I didn't. Even if I had to use the ball of my fingers to type this out.

We got back to his house. The first thing I did was to do up a new Tinkerbell harness for her more to
my liking. The earlier harness is beside this station in the Internet cafe and will be left here
when I finished this report. In the evening, Tinkerbell bend her head for headrubs. Just like before.

I told her so many people around the world wanted her to have her head rubs. Most of all, was me.

Then in the evening, the Shi family and Wu family , his younger brother family came for a welcome dinner of
Taiwanese steamboat. Hospitality from Taiwanese is beyond words.

Wu brought Halftail the Bimbo for me. I had to console Shi for the demise of Zorro 3 months back. Yu
told me that earlier that afternoon. 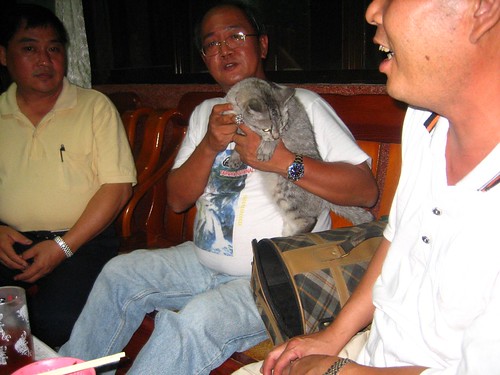 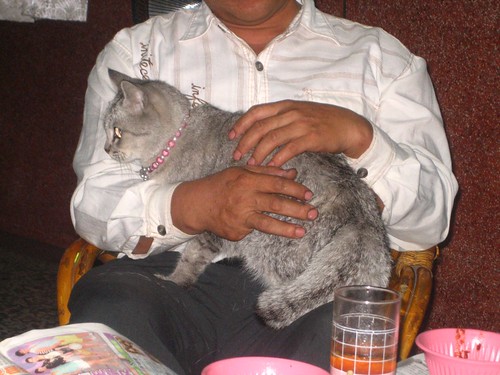 I told him ferret do not have long life. Zorro had 3 years with me and an even better 2 years with Shi.

They did not go into Internet. So I brought hard photos of Yingshiong with me with videos of him singing
and recalls and other interactions with me. I felt so sorry my time with them this time was going to be
short. My wife planned for 4 months to be in London to see her younger brother daughters. I had to be hack
to look after YS.

More went on than I can write here as it is past midnight.

We felt with the typhoon moving on, the weather should be good on 2nd November.

That is when we drive to Tsaoling again to see our friend the birdwhisper Mr Lin there.

Needless to say, with Tinkerbell of course.