YS was let into the living room. Did a couple of simple recalls so I could give him some millis. I went off to the kitchen to get breakfast as usual and came back to eat it and watched the news. YS was watching me . It was almost like he knew I was procrastinating, or lazy and I made no move to doing his weighing. So he started again on his reminder to me, of flying from fan to behind me, and then launching himself on the glass of the cabinet in front of me.

The camera was beside me and I prepared to take a shot of him doing that. I could not do sequential shots as the light was too dim and the speed too slow. So I had to use the flash. The shot is of him just as he reached the glass and go a soft 'c h a n n n g g ' . And if I ignored that, he would repeat that again, flying to behind me, and taking off right in the middle of my field of vision and 'c h a n n g ' again, and again. 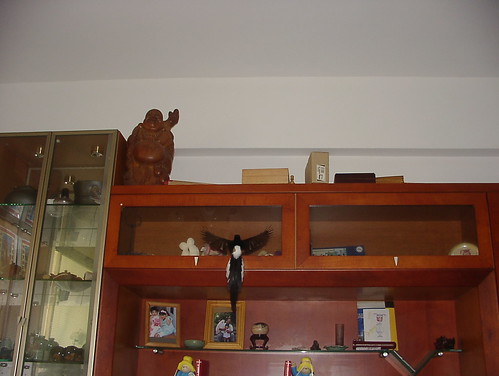 That was then followed by all those play / training. Very good response from him. In the intermediate and long recalls, I gotten used to him flying to me, hovering until I called him. Or his flying to me while I was walking and flying back to wait for cue and zooming yet again to my finger for his treat.

I let him be and harvested the trap of suris and millis. Got lots of suris from big gravid to medium to small together with loads of millis. I set aside the big gravid suris to add to the pure suri box. YS flew in and hijacked the biggest gravid suri and was chased out in disgrace and the sliding closed to keep him out. After enough suris were taken for the suri feeding box, the rest were redistributed about. The millis were all chucked into the milli fattening box. // suri at 72.4 //

I went to the PC room and heard YS calling me from the dining area in a short while. I called and called, but he wasnt coming to me this time. I walked out to the corridor and he caught sight of me to fly over. He got suri.

Later he joined me in PC room. I greeted him by walking over and twirling my fingers for him to sing softly to me and hopping to top of finger. On slightest reason, he got suris. And after a while of being ignored, he flew out and I traced where he was from his calls.

After a period of ominous silence, I went to look for him. He was not in the kitchen, and not in the bedroom. I walked swiftly to the dining and living room not to find him there. I doubled check and growing more anxious by the second as I could not find him. I noticed gaps here and there and called and called him in case he really left by those gaps out of the apartment. No matter how I checked security, there was always the nagging fear I missed an opening. It was getting pass fear and paranoia as I could not find him and could not hear his answering calls. I was about to go outside the apartment and went back to the PC room to get my handphone.

Then I saw him sitting on the back of a chair. I felt like strangling YS. He put me in such a state of fear and he did not call back to me when I was calling and calling him. Folks, if you live with a flying bird at homw, you got to get used to periodic fears that your protection and sealing aint good enough. Especially so if your bird is as wicked as YS who chose not to reply to me making me search high and low and panicking more and more by the minute. He deserved strangling rather than the suri I gave him instead.

And time to change over with Ivan let out and my going to lunch.

He let me know in his special way he wanted training. And so he got that. And his freedom to do as he liked, be it with me in PC room or singing here and there as he chose.


She made more toys and took photos of those new toys for YS and the way YS was playing with them.

You can see that in folders

The descriptions and captions of those photos will be lost if you use the slideshow, so it may be better if you see those photos one at a time.

For even more photos ot Tinkerbell and Taiwan, you should check out Joy's other folders in