After my breakfast and coffee, the MM was weighed at 38.2 or .2 gm less than yesterday evening. Fresh MM at 39.4 was then given.

YS was at 33.6 gm. After the usual short training session, I left him to complete the security of the apartment perimeter and setting of cat flap so Ivan and go and prowl. Ivan only patrol the floor corridor, of which we are the only inhabitant. Much of the units above and below were not occupied. Ivan is a coward and would never go too far away.

That is still a cause of infuriation to me. I asked my wife why she got this floor and she told me at the time of application, the authorities told her ALL the apartments were already taken. After 5 years (most of the time we were not here), 90 % of the units in this block remained empty. This goes to show the standard 'truthfulness' to be expected if you have the misfortune to live in this country.

The perimeter security was reasonably completed by mid morning. I was called back again by Yingshiong as he wanted me to entertain him as he taught me how to feed him his treats.

I also prepared the treats that I needed for his inaugural entry into the apartment. I decided that should be at about noon as that was the time YS shown best response to me. 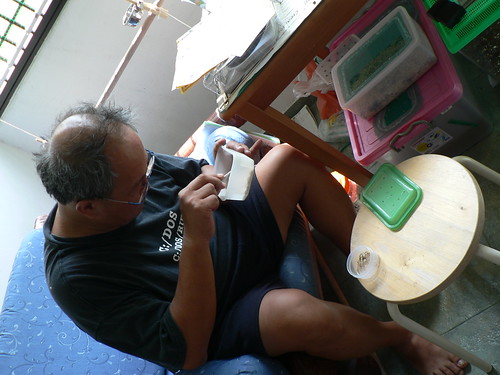 
The apartment was ready. Ivan was locked into the spare room. My wife Joy had her camera ready for that moment. I slide open the glass door and step into the living room and sat on my chair. The milli, the suris and the clicker was all ready.

YS perched on the door perch and looked at me. I calm my mind and called to YS with a firm voice to come here. He looked at me and even though he did not shake his head, I could feel he was telling me nothing doing. I tried again, holding out the clicker as a visual cue to him. He wasnt going to move to me.

I thought over the couple of scares I had when I realised I did not closed the sliding door. I did not realised I had nothing to be scared about at that time.

I then tried the time tested method of 'waving a suri' in addition to that recall cue. To my delight, he took off. That delight was very brief, about half a second. When YS flew to the door line, he abruptly made a U turn and flew back to his perch. 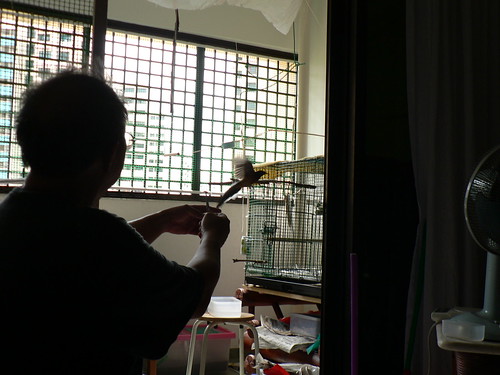 Joy shot the photo just at the U turn in flight.

After all the reluctance to fly to me, and when he did so, it was as if he hit an invisible force field and bounced back.

I tried again, and again, he bounced back at the invisible line. He had such reluctance to leave his flight room. Perhaps he feared the cat. I told him the cat was locked up. I reassured him everything was fine and he would enjoy it.

I tried again, and yet again, he tried his best but he could not cross the line. Those three attempts were captured by Joy. I was grateful to him that he did try his best, and I realised the enormity of what I was trying to do. Shama is so incredibly shy and timid that what I took for granted could be so challenging. YS still refused to come to my shoulder. When he did step ups, I sneakily moved my hand so he was like standing on my thighs, then on my stomach, and then on my chest. But when I tried to move him to my shoulder, he flew off.

I wanted him into the apartment as he did 'graduate' as you all could see. The apartment offered a much bigger flight space for him to fly even better than in his small flight room. But he remained back on his door perch looking at me with fear in his eyes.

I had to change tack. I went back into the flight room to comfort him. I then tried a standard recall. Even with me in flight room, he refused to fly to my hand. I waved a suri on tweezer and only then, he flew to me. I did a few step ups to calm him down. When I got up with him on my finger and moved to the open door, he gathered his courage and flew into the living room. He flew very quickly in a circle near the ceiling. He hovered to check the top of the cupboard and continued to fly near the ceiling. He then flew to the apatment door. Then he landed on the mesh on that door. I let him be for a few minutes to let him absorbed his new surroundings. I moved near to him and he flew off the circle the ceiling again. Then he flew back into the flight room, and perched himself on the window, where he perched for the first few days far far from me. He then flew back into his cage and refused to come out. I showed him his miili bowl and his suris to be ignored at.

I left the glass door open and sat in the flight room with him. It was a long while before he came back on the door perch. He refused all recall cues. For the next couple of hours, I was ignored by him. Only gradually after that, he accepted treats brought to under his beak. Then he responded to standard recalls. He refused a couple more attempts from me to recall him back into the apartment.

I finished the suris. The smb 2 was now rested and smb 1 was reopened to extract millis and suris. The last time when I rested smb 1, there were lots of little baby suris and I expected to get good harvest.

To my surprise, I could hardly see any suris. There were some small suris there, some big ones I left behind but nothing like what I expected based on what I have seen a couple weeks ago when I send smb 1 into R and R. I called my friend David and found that I might have overfed the suris, or pineapple beetles as he prefered to call them, allowed some mold to grow as a result and that must have killed off the suris or 'ong lai ku' as is called in local dialect.

If any of you local Singaporeans reading this blog know which bird shop/shops now selling those 'ong lai ku' here are in Johore Bahru, please write me privately and let me know where I can buy more of that. I still do have some in smb2 (now in R and R) and in smb 3 (also used for crickets). But I need more to build a sustainable and harvestable quantity of suris or ong lai ku.


Luckily, I got the millis and crickets and small size mealworms that YS liked.

The whistling CDs I ordered from USA came. I used to play one with Tinkerbell before. It did not work with Tinkerbell. Perhaps mechanical things played and replayed hold no interest for Tink. But should you ever say an *EXPLETIVE DELETED* with her around, she would latched on to that and would use the words on you. You swear at her, she swear back to you. I believe that parrots, especially Greys, are empaths and words with emotional punch is attractive to them.

I could not whistle so thats why I got the CDs (birdwhistling.com).

I thought perhaps YS might whistle part of those tunes. I played that without much expectation. But to my surprise, YS was energised like nothing before. that whistling on that CD made YS sang so loudly and so long. His tail were flickering in full display and challenge mode. After an hour, my wife was worried enough to ask me to stop the CD as she was worried for YS throat. For a couple of hours, all my recall attempts failed as YS just wanted to sing and challenge. I took off that CD to play the Andes flutes but YS continued to sing and display in full mode.

I closed the sliding door and liberated Ivan.

I realised I forgot to do the weighing at lunch.

Then at about 7 pm, I decided to leave the house to buy back dinner. Normally at about 715, YS would go to sleep and would call loudly to me.

When I got back 30 mins later, my wife told me at 720, YS called softly. She then went to tell him I was out and would be back later. YS kept quiet after that.