I got up later today at 915 am. Took my coffee and breakfast out to the hall and things were quiet. I now know that was just a lull. Perhaps the birds in the neighbourhood got intimidated by YS. To reassure me, in a short while, YS went into a loud singing mode. For all I knew, he might have a superior hearing and heard a bird somewhere that he had to shock and awe with his singing. Or he might just sing for the heck of it. I watched the news and finised my breakfast.

YS was called down to the scale to tip it at 32.8 gm, We then did our usual training. To me , it was less of training and more of interaction with YS to add on the bonding with him. This training stimulate his mind and reassured him of me, that this was fun and being with me was fun. His rewards were deliberately varies, could be one milli or two, or a suri or a cricket. I tried not to get into a pattern.

I wanted my wife Joy to shoot some photos of us. For that, she need to be in the flight room with me unlike the shots she took of us when she was outside on the other side of the glass door.

I got Joy to get in. YS flew into his cage. Joy then took the small milli box but YS did not get out of the cage. So I told her to stick her arm into the cage and offer YS. YS took in a little while. She let him ate a couple more of millis. Then I asked her to sit on the chair instead of the stool. To pass time, I told her to pick more millis from the intermediate box into the milli holding box. Those were actions YS was familiar to. He came out onto the door perch. Joy then stood up to offer milli to him. He took some. I guessed YS was familiar with Joy having seen her often enough. with those briberies YS was more tolerant of Joy in there were him.

We then went in together. I got Joy to stand in the corner of the room to the left of the armchair so she could shoot YS flying to me.

I then did the recall exercises with YS. The response from him was not perfect as he would with just me in the room. I could hardly complain and was happy enough that he did respond to his cue. Not all cues were responded to. Some of the times, he hesitated a few seconds before flying to me. He failed to respond a few times. But as Joy was seldom in the room together with me, and holding a camera with an intrusive red beam shining on him, I could understand that YS was nervous.

But some nice shots were taken. 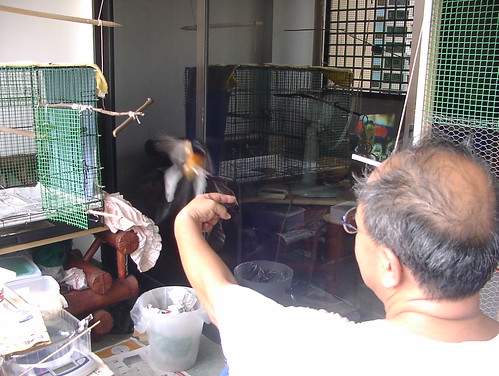 3 of such sequences were editted from those photos taken.

This shooting appeared to have affected YS.

From time to time, I went back in to play and exercise with him. His responces were not as good as the day before. I got only 70 % success rate as
against the almost 100% success the last couple of days. Maybe YS was cranky today.

This was done so early as we were about to leave the apartment to go to my friend CM house for dinner with other friends as well.