Thank you for your messages of support both privately and in here. It
is painful for me to answer you directly. I hope you understand.

I still feel so incredibly stupid to assume that because the pitta shit meant the pitta ate. And he paid the price.

This morning I woke up early, at 715 am. Yingshiong singing could be heard from the bedroom. I then noticed what I did not noticed yesterday. Yesterday my mind and heart was on other things.

There were other song birds singing in the distance, and a wild koel calling "kooo eee" "kooo eee" every now and then. YS was responding to them staking out vocally his terrritory. In the past, when I woke up, I grabbed my coffee and breakfast and switched on the TV for the news. Or when I went into YS flight room, I switched on the CD. And before the coffee kicked in, I was a zombie, and then the TV news or CD took over.

Before YS, I never paid much attention to song birds.

I presume that YS hearing was much better than my hearing. I mentioned that he was not keen on trainging until later in the morning. I guessed he was more intent to hearing other birds and making his own response than to be bothered with me, unless I got suris, and even then, he did not bother much until later on. I got to be grateful for small things in that at least he respected me enough to get on to be weighed, and that suri/milli before he had other things that were bigger priority to him.

YS was at 32.1 gm. I found it very interesting that his morning weight for the last two days were 32.1 gm as well despite different evening weights. And I found it so difficult to break this weight barrier.

I decided on a slight change today. I gave new MM at 40.1 gm instead of the small amount I gave for the last couple of weeks. I wanted to see what would be YS unrestricted consumption of the MM.

After a short exercise with him, I left him so we both could do our own things. It was a nice surprise when he called to me. Of course, I responded and we did our training. Yesterday, after he took a couple of froglets, he rejected the next offer.

I offered another froglet (zapped to minismise pain) that he rejected as well. That gave a fresh lease of life to the remaining froglets. I would be happy to release them together with the fishes I released yesterday. I would not have any twinge of consience about releasing those non indigenous creatures into the monsoon drain here. Long long time ago, there were beautiful local fishes and local frogs. But they were gone long long time ago until nothing local is left.

We did a couple more short sessions. In between those sessions, YS went into the cage to eat the MM.

His weight was 34.3 gm as a result of his gluttony of MM and my rewards of mills and suris and crickets.

I thought that was really fat. I did not expect much from the training but I tried.

I was so glad I tried even though I nearly did not based on his high weight.

I had the best response from him which was a big surprise to me. He looked at me so intently and was enjoying himself so much. Pure recalls were done with almost military precision. "step ups" were done one after another as I introduced him from one hand to another hand and from hand to chair or perch or table. He never cheated on his flying to target either.

Some people thought that bonding and relationship were all that they need to have their parrots/macaws to stay with them. I read enough painful stories that their parrots/macaws of many years relationship took flight to the horizon and never came back again. Those people let their wishful thinking mislead them. I felt sorry that their hearts broke. I felt more sorry for their parrots paid heavier price, lost to die lingering death or eventually taken by predators. Almost inevitably, those people never even heard of training for recalls and practising that daily and frequently. They think by looking at their parrots with gooey eyes and saying nice things and thinking nice thoughts are all that was to bonding. I just do not think you will bond by looking at each other, even for a hundred years.

The only person whose bonding and relationship mattered that I know of is that Bird whisperer of Tsaoling.

And if living together is all that is required, people who lived with their parrots or birds for years should find it easy to call them to fly to them at home. But to be fair to them, they never thought it to be possible. The difference with me is that I do not know what is impossible.

The some people felt food and rewards were all that was to ensuring the bird remained with you. If the bird do not take to the training, then lower the weight until they obey you as the master. They never thought they need to be more observant. Birds have their moods, and they need and should get their 'time out'.


This demeaned the birds as nothing more than food machines. If that was the case, I wondered why YS did not bother to take suri from my friend CM despite his best attempts. Today after the weighing, and with all the MM that YS cared to eat, and with him at a high weight of 34.3 gm, he gave me the best response ever.

Then in my revisit to Tinkerbell in June/July 2005, she never required even a sunflower seed from me for her hundreds of flights to me.

Read " I think I will be hung drawn and quartered"


This would demean you as well if you do think the bird respond only to food, you create an unreal matrix to view the training by , and you miss on the nuances of behaviour.

I do not think anyone knows the truth. The truth is likely to be a grey area between bonding and food. Since I do not know exactly what makes a bird remain with me, I relied on everything , including bonding and food, but never on anything exclusively.

This is a complex world. This is the real world. This can also be a rich world if you treat your creatures as your friends, and give them the respect and dignity as friends. This may be the real secret of what I have done. Not that this was ever a secret as I have said that over and over again.

I had taken some photos of Yingshiong. I called those photos his graduation photos from the flight room to the apartment.

Here is one of YS doing a pure recall to me. My other hand was holding the camera so I could not be waving a suri or milli for him to come to. 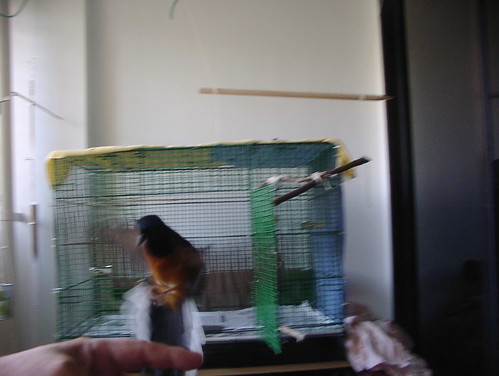 The first few sequence showed him flying up to touch target.

Then you see him doing pure recalls.

The last sequence showed him trying to cheat on touch target.


You are welcomed to view them at

Run this folder as a slideshow of 1.5 seconds


I was then out for lunch and to buy crickets.