Yesterday when I brought the BW pitta back, not only was he weak, there was also this huge tick with the head embedded in the right upper eyelid.

First I tried to remove it with the tweezer. Then I remember that alcohol might work. I could not find my Scotch as I seldom drink and did not know where Joy kept it. I took some cherry liquer instead to wet a tissue and tried to remove it. Guess that liquer did not have enough alcohol. Luckily I am a smoker although many of you castigated me for smoking with Tinkerbell.

I took the lighter to heat the tweezer and grip the tick with that. That tick released its grip. I must have flooded that poor pitta with all that handling.
And perhaps it was also weak with hunger. That was why he stayed on my hand to have that photograph taken.

I was also worried that the bird might be sick, if not from avian flu then from other sickness that might spread to Yingshiong. I prepared the new cage, loaded it with water and YS mash, and placed the BW pitta in it. I placed the cage on a ledge outside my bedroom window. My clothings were then washed with clorox and I had a bath as well.

When Joy came back from work, I told her she should read my journal when I finished writing it, and that she should not scream. She questioned me very agressively if I spilled the smb1 or other ghastly stuff and only suspiciously accepted my assurance that what she would scream had nothing to do with YS or stuff in YS room. Then when she read the journal last night and realised that there was a new bird, she screamed and had a look at the poor bird on the ledge and screamed again demanding I took him back into the apartment. I had to explain my fear to her of avian flu or other bird sickness to be allowed to leave the pitta outside.

It was this morning that I saw with relief the BW pitta looked good and much better than the day before.

Yesterday, I tried with YS an advanced touch target since he was responding so well to tt. I hold the target and tried to get him to fly to touch target. If you have seen Tinkerbell and target, you would have seen the photos and read my account of her doing that. But it was too premature with YS and he refused to respond to that.

So this morning I did what I should have done with tt. Before, he stood on the door perch to do the tt as I described. This time, I got him down to the stool. I hold the target far away for him to walk to. It was a test of will. Then he hopped over to tt, and got his click and suri. I can be very generous on initial start of new training. YS got the hang of it. I shifted target to other side of stool and he made his way there to tt. Now he knew it was not just bend up or down, right or left, he needed to move as well to tt.

That finished with him getting a nice cricket. I stayed on , had my coffee and watched him. To my surprise as I thought he was fed well with suris, millis and a cricket, he then flew into his cage to eat his MM.

Since YS did not like the mealworms, I gathered some of it.

I checked the pitta in the cage on the ledge. The poop looked good, and that meant he took the food I left for him. I lifted the cage and brought it into the spare bedroom as I felt certain enough he was not sick, and more likely weak because of no food or improper food. He was not thrashing about, and likely might have been a kept bird.

I added the mealworms into the mash bowl. Since I wanted to eventually release him, spending more time with him was not a good idea. I left the room after watching him a while to satisfy myself that he was much better this morning and closing the door against Ivan.

I called CM to let him know he had no risk from dying of avian flu as the pitta was ok. He was delighted and drove over to my apartment.

Shortly before that, I wrote to various group this letter which explained further the details behind the saga of the pitta rescue.

My friend CM saw it in a shopping mall. The pitta was
unable to fly and was so weak as otherwise that clumsy friend of
mine would not have been able to pick him up. CM was afraid
that cats or dogs or other people could get at that poor bird.

My first reaction was to decline when he called me on
phone, which I did. Then I felt I could not just walk away, and
changed my mind and went downtown to get the pitta from CM as he was going
into a meeting for the whole afternoon.

So it was karmic destiny that the pitta is now into my
hands. I checked out and definately, the pitta was unable to
fly meaningfully.

So you understand my reluctance now to place the pitta
back in the shopping mall. Especially more so as the pitta is
weak.

After my morning session with YS, I checked on the
pitta again.

The pitta is recovering and look much better today
than yesterday after given Yingshiong mash which I thought is a good
generic first fix as I guess that bird was an insectivore prior to
identification. I thought that may be a babbler at first.

I did have some fears of bird flu at first. I am much
more relieved now and his former weakness might have been from lack
of food, or inappropriate food. Might have been likely to be a
captive bird not looked after properly and then abandoned to die in a
shopping mall.

Luckily for the pitta that I now do have some
knowledge of insectivores, a far cry from the early days when I
first came here and stood on a soapbox pleading for help.

I added mealworms to the mash bowl and hopefully his
strength be even better.

With the intensive training of YS, and as I got a
certifed killer Ivan at home, a spare room is now a temporary home for
the pitta. I do not have time for another bird or even the
facilities for another bird.

When he is good and strong, I probably will take it to
a more appropriate habitat and let him get on with his life.

CM got over and delighted the BW pitta was doing better.
When we sat and chatted in the hall, he was delighted to hear YS singing
softly away.

Before we got to see the pitta, we went into YS flight room first.
I had wanted to show off how YS would fly to my hand and would step up
and other stuff. I forgot to as YS. YS flew into his cage and refused to
do all the stuff that we did together. YS ignored the bribes of juicy suri
from CM. CM even hold a suri close to his own mouth to try to entice YS to come out. I know, my friends are disgusting, and thats why we are friends for so long. 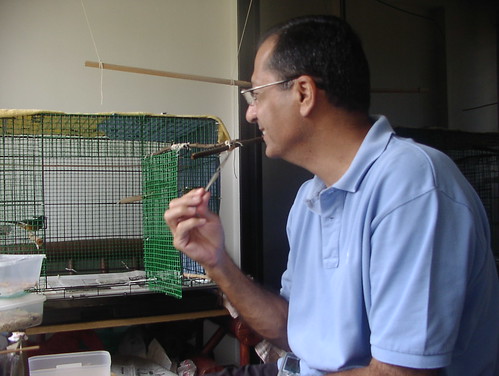 YS accepted that only when CM stuck his hand into the cage and offed the
suri on tweezer right to YS mouth. I thought I would do better but took a long time before YS decided to come out of the cage. YS did not fly to my finger, but look at the photos to see how YS eyes focused on the suri that I tried to lure him with.

I was hoping that CM would be able to take better photos of YS flying to my hand and getting the suri. But YS just wasnt coming. 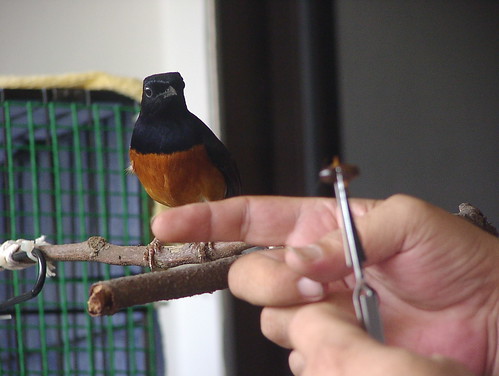 I had forgotten that shama is still a painfully shy and timid bird and what YS would do with me, he would not do if others were around. My plans to eventually take YS out like Tinkerbell seemed more distant away.

We then went to see the pitta. I explained to him my plans of eventually releasing the pitta back to the wild as I could not keep two birds. YS already required such intensive training. As I do not like the idea of bird in cage, and if the pitta is not to be in cage, the pitta will require intensive training and bonding with me. As such, the plan will be for the pitta to stay in cage over the next 2-3 days to be feed and regain strength. Then the next 3-4 days, the pitta be allowed to remain outside the cage and in the spare room to rediscover his flying skills. Perhaps the last day, I would go in from time to time with pots and pans to bang on to induce in the pitta a fear of people. Then we would take the pitta deep into the nature reserve to be released.

At least at that time, the pitta should have the strength and reserves he did not have when found in the shopping mall, and the ability to fly and hopefully find a pitta wife to start their family.

I took the top of the cage off to let the pitta out and checked it. 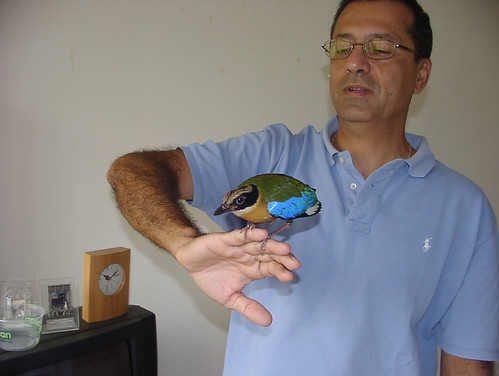 The way the pitta showed so little fear of us made me think he was a kept bird, but kept very badly to appear to us the way he did yesterday.

We then went out for lunch of boneless duck at South Buona Vista and for me to show him the new canopy tree top walk behind Kent Ridge that he never been to. I used to cycle to there, but that was before YS came into my life. If you ever get to visit Singapore, you may find that walk to be captivating in its own way.


We went through the series of exercises with YS getting jackpots of suris and crickets especially for the advance touch target.

I had been taking more suris from smb2. YS was very eagerly watching. I was happy enough when he intercepted a couple of would be escapee suris. He decided I did not allow enough escapees and he took matter into his own hands, or wings, and flew down into smb2 to get at the large gravid suri females in there.