Yingshiong was alert and singing this morning when I saw him.

The MM that I removed last night was weighed to be 38.7 gm

YS himself was 32.5 gm. I finally got him to about the weight range that I wanted him to be. I topped up the MM to 38.7 and placed that back into his cage.

I zapped 3 crickets in readiness for the training exercises. Then we went through the series of getting him to fly to me, to step up and the touch target. Ever now and then, he got suris or a cricket and he got his millis at other times.

After the training, I thought I introduce the guppies to him. He rejected the guppies. Then I put some guppies in a small container of water about 1/4 inch deep. He hopped in and started to throw out the guppies. I thought he was not very fair to the guppies. I find those needless deaths of guppies, being thrown out of the container but not eaten to be troubling. To the extent that later in the day, I threw all the guppies in the big drain near my apartment to allow them to live.

Then about 11 am, I received a call from CM. He was excited and explained to me he caught a very colorful bird walking around and unable to fly. We met up around noon to take over that bird. I was surprised that the bird was as colourful as he said and not exagerated at all.


I bought a small cage on my way back to keept that bird safe while I try to bring him back to recovery. I placed in water and YS mash. I dared not keep that bird with Yingshiong and decided to quarantine it. 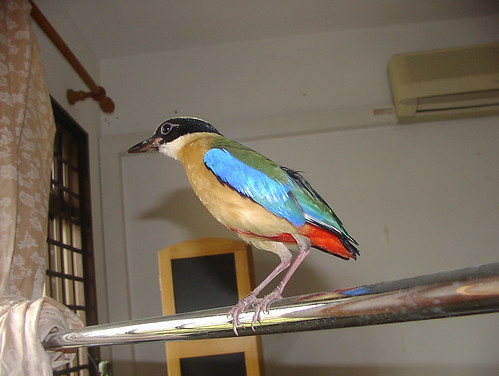 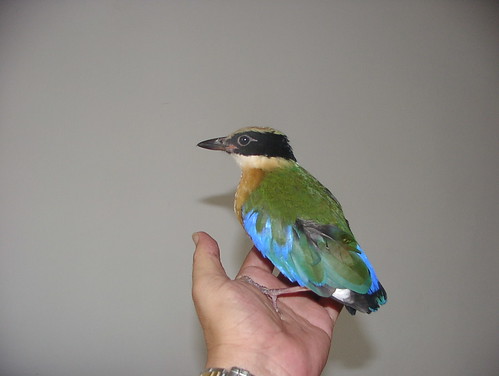 I received swift replies that the bird os a blue winged pitta and that the diet is similar to the shama.

I then washed my hands very thorough and went to YS.

I threw and wah away the MM and prepared a fresh batch of 39gm amd took him trhough his basics.