I first uploaded some photos taken today and made comments as to what
they are. So it will be best to view them one by one rather than to use the slideshow. Those photos showed the boxes of suris and intermediate box and holding boxes. Photos of the new treat that I discovered and the target sticks and clicker and other miscellanous photos.

Slideshow does not show the comments.

I went out for a ciggie before I continued with the blog as my wife refused to let me smoke in the PC room. That's when I found Discovery channel was showing the "Capture of Saddam" and I had to watch that, part of history that unfolded during our times. Now I am back here again.

YS flew back to the door perch and was watching me intently . I got out a whitey and sat and waved that to him with as great a sincerity as possible notwithstanding the hidden agenda and ulterior motives behind that offer.

I liked to conserve on the suris as I found less and less of them everytime I scooped up a batch from suri main box 1 and I liked to stretch my suris out by giving whiteys.

YS looked at me and refused to fly over. I got up to offer to him and he took that and dropped on the floor ungratefully.

I had to scoop up another batch from the suri main box 1 into the intermediate box to select suris into the YS holding box. In despair, I saw even more of those tiny worms.

You have seen how difficult it was for me to hold YS weight down. I needed to train and bond with him. It would not do much good for bonding if I looked at him and he looked at me. I needed to interact with him via the training so relationship can develope and we bond.

Problem is that to train, I needed to offer treats, except the treats were so big in relationship to YS. So he would get so full that he would not be inclined to the treat, and the training.

Then it struck me. I did not use those tiny worms earlier for serious training as they were so difficult to hold by hand even though YS loved them so much. Yesterday, I opened the suri main box 1 and let YS get to those worms to try to get rid of them. I even started suri main box 3 to try to get pure suris without those worms.

So I uses a tweezer and I could pick those worms easily. I gathered some of them into a small box to offer to YS. 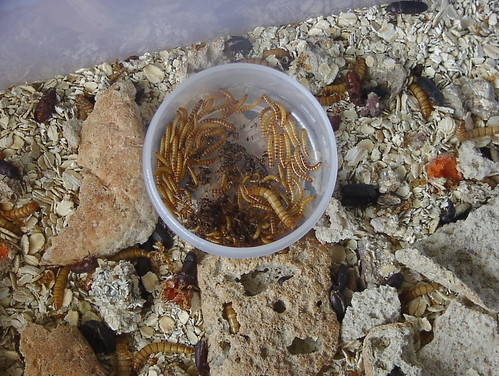 You can see how small those worms were. The big one in the round box was a regular mealworm placed there for comparison.

And I found simultaneously a solution to holding YS weight down as well as the perfect training treat and how to stretch out the suris. The worms were so small that maybe 20 of them is the equivalent of a medium suri. I could train and treat without YS stuffing himself so silly that he no longer want to train. And if YS was hungry still, then he would eat the MM which was nutritionally balanced and with minerals and vitamins that I wanted him to eat.

He flew to me to stand on my hand and got a click. I hold that box and allowed him 1 or 2 or 3 of the small worms. I found that if he did not know what he would get, hewould be more eager in anticipation, and trained better.
Especially as now and then, he would be given a suri, maybe 1 every 4-5 times. I call that the jackpot. But at all times, he would get a treat.


Since those worms were so small, he would take that and eat them immediately and remained on my hand expecting more instead of flying back to cage to beat and soften them.

I do not know the name of those worms and the beetle they developed into. I will call those small worms millis , short of milli sized worms.

Then I took a break and shot those photos. It would not be good to train and train and train until either one of us got bored. The training must be interesting to both parties to be sustained and be successful.

Instead of looking at those worms with frustration, I became so enthusiastic on them now. I scooped some peatmoss with suris and worms and all into suri main box 3 to seed that with worms as well. I checked suri main box (referred to as smb from now) 2 and found to my delight that the worms were there too together with big suris. I had not taken any suris from smb 2 since I started this culture about 3 weeks ago. So I took some from here to dump them into smb 3 as well.

Later in the afternoon, I decided to try to get him to 'step up'. He resisted and pecked at me. He never imagined how much I was delighted by that.

'Step up' is too important an exercise and I had to persist. With 'step up' , I could move YS about and placed him to various perches. One of those perches would by my shoulder eventually.

Gave him half hour break and tried again. In the past, I used two hands, one to hold the treat and the other to try to sweep him up so he would step up.

I decided to use one hand this time.I hold the milli box with my thumb and index finger and offered to him. He made his approach to get at those millis. I then straigthen my middle finger and so he need to stand on it to get the millis. He hovered to make a sneak grap at the millis and I turned that box away.

I tried again. I was so delighted he hopped on my finger for his 'step up'. The main point was to get the action regardless if his mind was on the food. Once that was done, repeats would always be easier than the first time.

I tweezered a suri and waited a short while. I tried the 'step up' again.

Reluctantly, he did it. He earned himself 4 millis. And to show him how pleased I was, he got that suri as well.

With the millis , I would increase my odds with YS now.