I tried hard yesterday to keep YS weight down with him at 34.5 gm at the end of the day.

This morning, that reflected in YS weight at 32.9 gm.

YS was cheerful and was singing away before I joined him, and nicely, he sang with me with him. Perhaps he was just moody yesterday.

Today being a Saturday, my wife need not go to office and was with us. She was invited into the flight room. She did not have the courage to handle the suris so I got her a whitey on tweezer. YS showed no fear of her and took it nicely when she approached him on his door perch.

My wife Joy took some photos of us through the glass door. Here is one of YS being weighed. 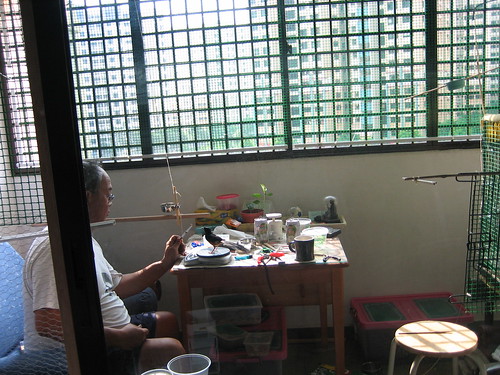 I had a slight problem with keeping YS weight down. I just could not cold turkey cut his food for a couple of days. I liked to interact with him in standing on my fingers and other training. That required treats given to him. I refused to consider any more the cutting of whiteys and suris into little bits.

I noticed he was preening on the door perch and thought perhaps he liked a bath. I filled his bath and he flew immediately down to it to take a drink. He went back to his cage and hopped on the perch next to where his water bowl was placed. He couldn't had been on a drink strike. But the way he looked at me, I surrendered to his eyes. I filled his drink bowl and replaced it into his cage as before. He showed himself to be such a strong willed bird that I could not persist in forcing him to the other perch to drink.

He immediately flew to this water bowl in his cage and took a long long drink. He then went to his MM and ate and ate, alternating with hopping to his water bowl to drink.

And he sang and sang after that. Made me felt so much like a Philistine in removing his water bowl yesterday completely to compel him to go to the new water bowl I set out for him.

I was watching that from outside the flight room. I then went back in. Though he just ate from the MM , he looked at me in such a responsive way that I thought I worked on him on my fingers. I even used suris instead of whiteys. Joy had this new digital camera (her number 5) and shot some sequential photos of YS flying to my finger, staying there and taking suris from me. 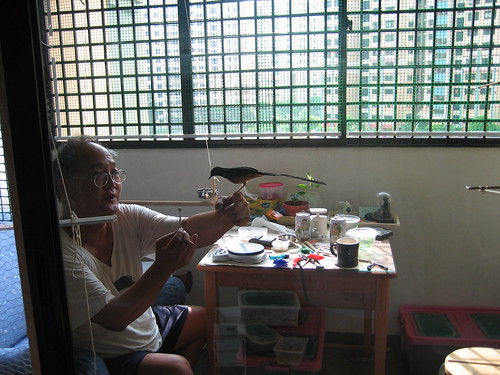 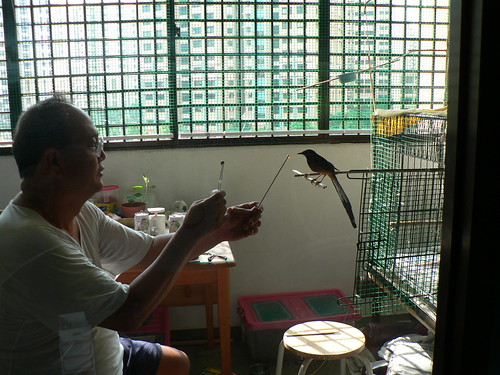 More of those photos can be seen in


I went back to YS to work on the touch target again. I was not optimistic from the earlier few days. On top of it, YS had eaten the MM as well as all those rewards for standing on my finger.

I took a suri and hold the target in front of him. He looked for a short while, then he pecked the target firmly and looked at me squarely in the eye. I praised him and gave him the suri. I waited a while and tried that tt again. He hardly hesitated and tt to lots of praises and another suri. The third time was immediate. I think he wanted to humour me.

YS even jumped on the target stick perching on it to get the suri.

I believed I finally succeeded. TT was such a simple process for Tinkerbell. But Tink was a parrot and nowhere as shy and timid as a shama.

The box that was used to hold crickets had been empty for a couple of weeks. I decided not to get crickets as crickets are big and not suitable for training treats.

I decided to use that box as yet another box for suris. And I might even get crickets again as urged by Joy. She liked the sounds they make turning the apartment into a jungle. And perhaps I might allow them to breed so I could get small crickets. The suris and crickets (if I do get them eventually) can coexist in the same box, the suri deep down in the peat moss and the crickets above, and perhaps using the peatmoss as a substrate to lay little cricket eggs.

So big suris were taken from the main suri box 1 to colonise the peatmoss at the bottom of the suri/cricket box. YS looked on excitedly and made sneak dives to get at the suris.