After saying good morning to YS, I remained in the hall to have my coffee
and breakfast. Of course, I said more than just 'good morning' to him. Just another change in the routine with YS. Instead of going straight into his flight room, I hang about outside to see if perhaps I can raised his anticipation level first, while watching the TV.

Kind of keeping him on his toes, and that he should not take me for granted.

He kind of sat on his cage door looking through the smoke glass sliding door at me wondering what it was all about, with occasiaonal flight to the night sleeping perch, calling out to me, and back to the top of that open cage door.

I got another cup of coffee and went in to him, sat on my chair and gave him a nice smile. Spoke nice things to him too. Not that I think he can understand me, but the act of speaking meant I think those thoughts actively, and perhaps he can sensed those thoughts. I also be talking to him to let him get use to my voice even if I cannot get him addicted to my voice.

Some of his treats had been taken out the day before to be kept in little boxes
for handing to him. If only he takes sunflower seeds like Tinkerbell, or bits of durian, or sashimi. That time, I had not worry the other sunflower seeds
would try to run out and away from the box evertime I took one.

With pineapple beetles, the beetles were fast escape artists, I already have more than one running in the flight room.

YS flew to the table, and called. I carefully extracted one beetle, placed my hand on the table and he hopped over to grap it. Then a white meal worm, with my hand closer to me now. I bend my body to get my head closer to the table.

YS was now on the edge of the table closest to me. I was happy with what we did. I took a nice fat cricket and placed it in his cricket bowl in the cage. I would not be feeding he cricket as treats on table. Crickets are too big and I do not fancy him breaking that up on table.

Treats are small bits, something nice for them, and not really meant as meal. By right, I should cut the worms and beetle into smaller bits, but that is just too icky for me. And definately, I will not cut crickets into small bits. That will remind me too much of what I have eaten in Taiwan and those
thoughts are giving me queer feelings in my stomach and back of my spine.

I then had a call from David. Perhaps he must have been prompted by the comment made by other people and Roberta with "Gosh, I was wondering just how this could be improved upon!!".

He told me he dropped me an email with 3 photos.


In his own words
"Hi Shan,

Attached are 3 photographs, taken on 29th October 2005, that I thought might interest you and your readers. The first attachment is a photograph of Melody's son whose photo you already have on your blog. The photo shows him one week later. The other 2 photos are of his grand uncle, Gifted. Gifted has not as yet completed his molt and I expect that his tails still have some way to grow. 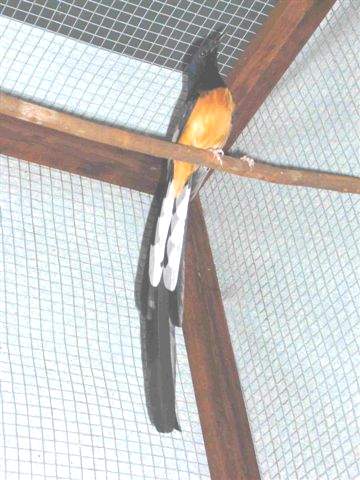 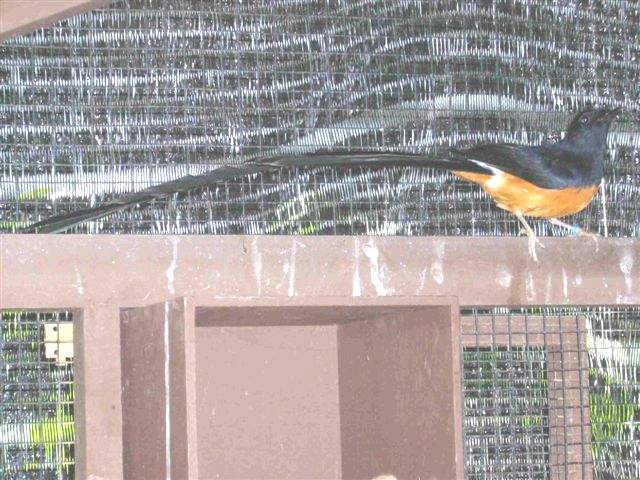 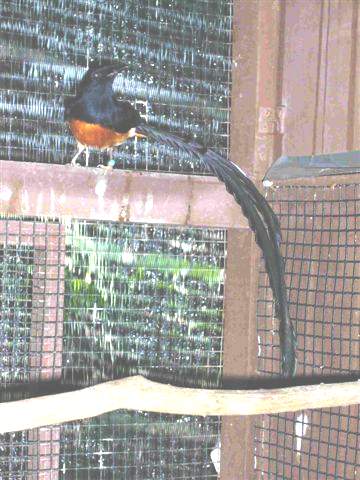 David was also very delighted that his Showy came home yesterday. When I visited him, David was so sad that one of his shamas that he cared especially for escaped after the maid forgot to close the cage door. Apparently Showy came out of his cage and was then chased off by a flock of mynah birds on 13 Oct 2005. After a long round of sightseeing by Showy and 17 days later, he came home on 30 Oct. David had to share that with me and I am so happy for him too.

Then in the afternoon, it was much the same as this morning. YS spend some time away from me on the various perches and in his cage. He took a bit from the dry food when I was watching TV in the hall. When I got in, he chair chair chair at me and flew to the table landing halfway to me and called again. I hold the beetle near the corner of the table and lowered my head to the level of the table. I was shortening his comfort distance even more to get him even more used to me. YS did not feel threatened and went to take that beetle and looked me in the eye as if he wanted more. I had to remove my head in order to take a good look in the small container to grap another beetle. Since I had about 5-6 beetles inside, I needed all my attention to make sure they did not run away when I got one out. He got another two more in succession.

He flew to the lower perch and he had a couple more.

I then decided to make the wobbly perch. That was created out of bamboo strips I cut and about the thickness of chopsticks to make them bendy as well.
That was like some kind of mobiles with light counterweights tied at bottom of a T with long asymmetrical arms. I substituted the lower perch by the cage with that with YS remaining in the cage when I was working around there. He seldom go to that lower perch before.

It took him half an hour before he flew out of his cage. He did not test that new perch as it was obviously new and perhaps he needed time to get use to that. Then he came to the table which pleased me much again. I was that slightly worried he might not, but then, this new wobbly perch was not located at the table.

I fed him with beetle even when he was on the cage door. I hold the beetle with my elbow bend and the hand almost on my chest. Again to shorten his comfort distance. So when he took that beetle, he was almost grapping that from my chest.

I left the tupperware bathtub with him all the time on the chair. Two days ago, on Saturday, he bathed there twice in the morning and again in afternoon. He could bath as often as he wanted.

Then yesterday, he did not bath.

Strangely today, it was about 645pm and the light was rapidly fading when he decided to bath. What am I to say! But I was surprised he decided to have a bath so late in the day.