If you have not seen the comments made by David of yesterday entry, you should
page back to take a look. You get a solid description of the pedigree of that shama and you get a good feel for the passion of David that I could not
quite get into words.

I was told that on Saturday. I was told a lot of other stuff until I suffered
from information overload.


This morning, I took some photos. More can be seen in that flickr folder
http://www.flickr.com/photos/shanlung/sets/1226393/

I extracted some below.

The first photo showed how I rigged a drink bowl and dry food bowl on the perch.


Then the 2nd photo showed the small perch that I made for YS on the table.

And the next showed YS on the table as well.

You see some closeup shots of those beetles that YS loved so much.

The last couple of photos were taken by flash to show you where YS sleep at
night. As I said before, looking at me instead of the dark corner I arranged
for him. 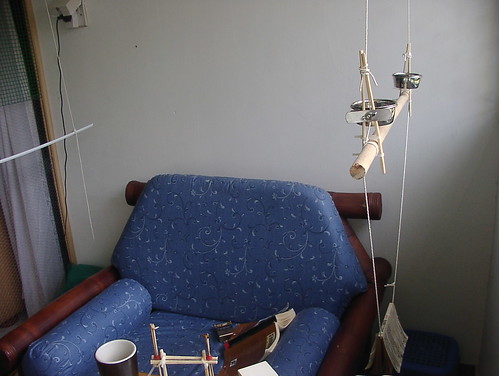 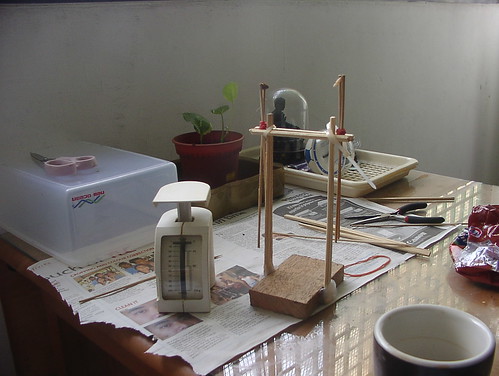 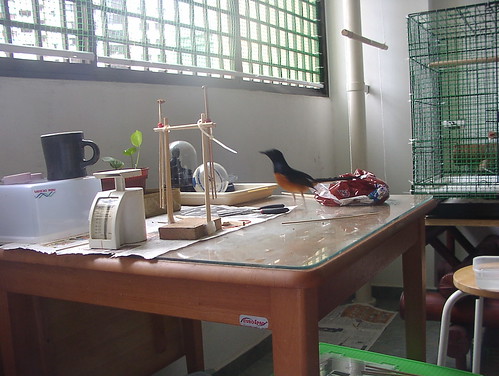 I was kind of proud of the small perch making it convenient for YS to stand
on it.

So in the morning, that was tested out. I thought YS will appreciate it
the way he appreciated the additional water and food bowl which pleased me.
Of course, you know my ulterior motives were to get him perch next to me.

But if he perched on the table, it would be easier.

So when I went in, he was at the high perch calling me. I sat down and he flew down to that drink/food perch and called for his treats of worms and beetles. I gave him a couple to warm up, then I told him to get to the small
perch. He looked at me with incredible eyes and flew up to the high perch.

Fine, I prepared for that. I used skewer sticks rubberband together to act as
worm and beetle holder. That way, the treat should act to entice him to the
small perch, and hopefully, he get used to standing on the small perch. You see in the 2nd photo the arrangement of those lures. The one on the left hold the pineapple beetle and the right hold the worm.

But first must tell you the beetle look like a most disgusting cross between
a bed bug and a small Madagascar hissing cockroach. They can move fast and the
only way is to catch them with your hands from the peat moss that they live in.

Only shamas , and those that keep shamas, love the pineapple beetles.

The beetle was zapped to stun it and positioned with my beetle holder. YS showed a marked reluctance to fly down to me. So I continued with the book 'Panzer Leader' written by Heinz Guderian. He gave a more detailed account of the tank battles of the 2nd WW. It was incredible to read how
Hitler snatched defeat from the jaws of victory.

That was an absorbing part and then I remembered that small perch and lures I set. I looked up to find YS still up there. I looked at the lures to find
the beetle had this incredible recovery from the zap and must have struggled
and got away. The meal worm was still there. I searched for that beetle but could not find it. If YS flew down, I would have heard the whirl of his wings.

So I may have a gravid disgusting beetle roaming that flight room. I have no problem with the beetles breeding in the beetle proof container, but in my house? ARGH!!! Hopefully Ivan will take care of that.

My pride in the small perch began to diminish. I know it looked tacky and
clunky. YS showed such distaste that he alternate between the high corner perch and the perch next to me, refusing to go to the perch and those lures.

How was I to know that YS had such good taste to be disgusted by that perch
I made.

Then after a while, I did not see the worm. I felt my lure holder might have
slipped and twanged the worm off. Since my cup of coffe was next to it, I decided to go to the kitchen to pour it off to check. At the bottom of the coffe cup was that worm. I was glad I was paranoid enough not to drink that
coffee.

I fixed up the beetles again, this time making sure of giving them a double zap
so they will not wander off to join that missing bettle, and made sure the lure
holder hold them firmly.

YS flew down to the table and slowly came to examine them. Ah! I thought my
patience was paying off. He then abruptly hovered himself up to the beetle
to pluck that off and flew back to the cage.

That was annoying to me the way YS showed such disgust on the perch I created
for him. I tightened the rubberband on those lure holder and added more bait.

He flew out again to the table. He hovered himself up, grapped that worm, could not tug that free, and then flew the worm, skewers and all to his cage.
Thats why I took a cable tie to make a loop to hold the skewer from being hijacked by YS.

My pride got hurt. It was bruised earlier when I tested the small perch on
the weighing machine that registered up to 100 gram. That needle shot up to
beyond 100 gram with the perch alone. I think I cannot hope to weigh YS yet.

I surrended, called him , and when he came on the perch next to me, gave him
worms and beetles one at a time.

But I insidiously snatched some victory from the jaws of defeat.

Late in the afternoon, I lowered that wooden perch so he will be eye to eye with me.

Maybe I get better luck tomorrow with the small perches.