Yes, that sicko cat of mine got me out of bed again. Even if a cat has nine lives, Ivan would have been dead long time ago if he did not have redeeming features. Ivan is one of the best masseur, and most of the time before I go to sleep, he will hop on me in bed and give me a long good massage.

So I prepared my breakfast and went to the hall to see how YS was doing in his flight room. I saw him at once through the mesh as he was on the perch just next to my chair. 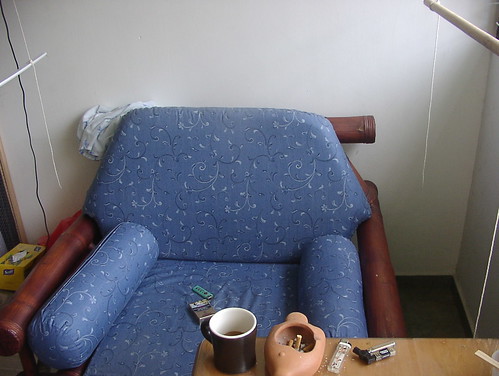 The photo above show part of the perch at the upper right corner. I have not
taken photos yet showing the two stainless steel bowls I fixed near each end
of the perch, one for water and the other for dry food.


He was taking some of the dry food but stopped when he saw me and he called
out to me. That made the efforts I made to get the two bowls well worth while.
I search for that before I met David on Saturday afternoon. Later that
evening, I searched for the stainless steel bowls again. Then on Sunday, I
spend about 4 hours just to get those bowls. Of course, that included time to
look around at the parrots and macaws since I was there anyway, and hunting
down the peat moss for the pineapple beetles. That YS used that was enough
appreciation for me.

I sat down on the chair and had my coffee looking at him. He was at about my
eye level. He called and called at me and then I realised he was calling
for his breakfast. I was happy to oblige him. I looked for a few recently
moulted mealworms and one by one, hold it up to him. He took them. I then
got a few succulent pineapple beetles that he loved and gave that to him one by
one.

After a while, he flew back into his cage. I did not mind at all he spend
some time there too. At least his shit there will be caught by the newspaper.

Zapped a big cricket and put that into his cricket bowl. He caught that and
threw it down and finished it all. I was surprised as he had quite a few meal
worms and beetles. He had a good appetite. Not that I complain as I wanted
him to have a good appetite. I like to expand his stomach even more. He
finished the 2nd cricket but took only the head and body of the 3rd cricket
and I thought he had enough.


But I will give mealworms and beetles to him only on that perch. After all, he
started that himself. He really got at home in the flight area. Going into
the cage, or flying out to the outside perches and doing flights.

It was cute in the afternoon when he perched up high, then flew towards me and
making a U turn to fly back to that high perch. Now and then, he came to
that drink perch and called for his titbits.

Then it got dark and I was about to go for a swim. I was coming through the
hall when I turned to look at YS. I was surprised that he perched on the
rope perch just next to the mesh screen.

He called chair chair chair at me and I went over to say goodbye to him and
told him I was going for a swim.

When I got back later on, I smiled to see that he was still on that rope perch
instead of the corner perch specially shaded and kept dark for him. He
was not sleeping and was keeping an eye on me to see what I was doing.

I think we will be good friends after all. 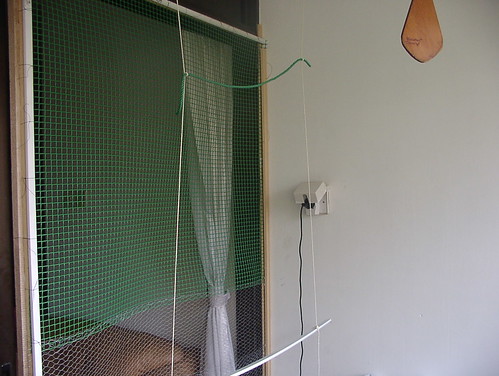