Yes, Ivan got me out of bed this morning. You can always shut off an alarm clock, but shutting a cat determined to wake you up can be very difficult.

Prepared as usual breakfast for YS and myself and went into the flight room. Stuck the dry food bowl and cricket bowl inside and had my breakfast while watching YS picking into his dry food. Maybe I am too use to seeing Tinkerbell gobble and gobble his breakfast with a glug glug glug intensity and still not too use to the delicate picking of a shama. Now and then , YS will go to the water bowl to have a drink before hopping back to the dryfood.

Sat there, had my coffee and continued into my book for an hour. YS must be thinking where is the cricket. I had the mealworms already but still content with letting the mealworms fatten on oatmeal, bread and boiled carrots. Yes, I boiled the carrots for ten minutes to soften them, pack more water into them and even froze them so the tissue becomes softer and easier for crickets and mealworms to munch on. Of course, the carrots were then thawed before cut into pieces. At least the crickets and mealworms enjoyed the soften thawed food more than YS.

I decided not to feed the crickets to YS yet as I wanted to make use of them to get YS back into the cage.

I opened the door with a tupperware tray of water on a stool outside the cage. He looked as if to come out and hesitated for 15 minutes. Then he launched himself out. This time, the perches were ready for him.

He ignored the new tray I bought for him yesterday, deliberately bigger than the one I used before so he can bath better. Bloody ingrate.

At first he ignored the perches and clung to the net at the corner far from me. I read my book and let him settle down. This time, I brought my camera into the flight room. The light had too much contrast and difficult to take good shots. I tried to follow his flight with my camera. Eventually I gave
up shot some samples of him landing.


But you can have a better idea of the flight room, my armchair that I sit and read in, the table and the way I hung up the perches with silicone cement. Not pretty, not elegant, but heck! as long as YS is happy, that will be more than enough for me.


His flight was not as fast as Tinkerbell, but then, he just started to do serious flights recently.

Do a slide show at 1.5 seconds interval to see him in flight.


The other day I mentioned about the white tail feathers scalloping out gracefully? That was when he did a turn or braking in air.

The second photo is clearer and you can see I did not kid you
even if the photos are blurred. I decided against flash as he is
already so timid and shy. 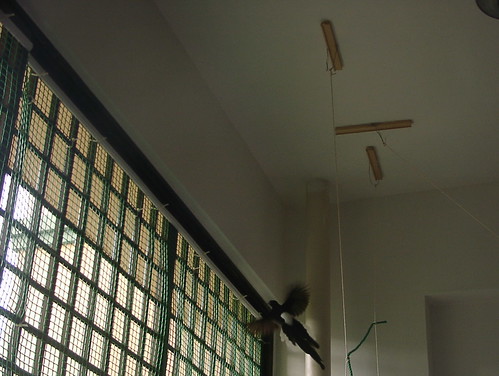 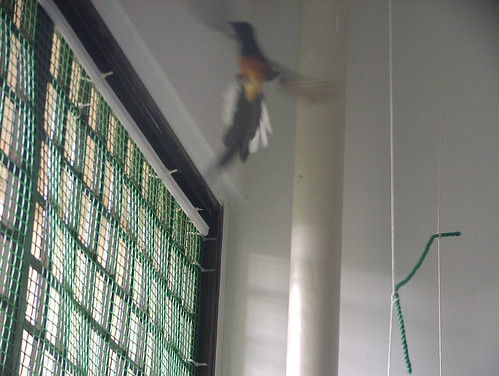 I left the room to let him be and to settle down more and get use to the flight room.

I also decided that I let him stay all he want in the flight room and not bother to get him back into the cage. The cage door will remain open with water and dry food inside. Birds are smart, and if he is thirsty, or hungry, he should know where the water and food are. After all, he should know the cage very well by now.

I also decided to give him back the gift of flight. He now has the option
of flying further from me than his cage and hopefully, give him more confidence
in himself.

I do believe flight allow a bird to be a bird, and to give them the option of chosing to be or not to be with you. So you just have got to be nicer and more considerate to them if you want them to like you in return.


I think the flight area is cat proof and Ivan seemed to avoid that area after I chastise him the last time. Ivan also disliked the sound of
the electric zapper and got paranoid and run away every time I use that to get a mosquito. Now that I use that to zap the cricket, the zapping sound turned him off in addition.

I then went out for a long lunch of curry fishhead in one of the Indian restaurants at Serangoon road with another old friend JC. He is a connonsieur
or a glutton of fish head. Munching on the cheek, the tongue and even the
eyeballs. He even tried to crack the skull open to get the brain.

So it was late when I got back. In the absence, YS gotten the hang of the room. He now perched on the many perches I provided. After a while, I decided
to zap a cricket. I showed that to him and dropped it into the bowl in the cage. He showed no interest in getting back into the cage to get the cricket.

Thats ok with me. Maybe he was not hungry enough, or flying about
and exploring the flight room got him too excited to care for food yet.

If he needed time, then he will have time.

When it was dark, I removed the dryfood and cricket bowl for the night. His water bowl was left in the cage so he can drink from it in the morning.

But he will only get the food when Ivan wake me up and I go to the flight
area eventually to serve the food. I want him to associate me with bringing
the food to him.