I had thought of getting parrots into my life again. I was into an advance stage of getting a pair of Vos Eclectus, definately not a grey parrot as you may understand. Even at that, at almost the last moment, I felt I could not go through with that on the off chance something come up for me in Taiwan and I do not know of people conversant with flighted parrots to leave them to.

I then toyed again with an earlier idea of getting a shama. Since I left Singapore for many years now and did not have clear ideas where the bird shops are and which specialised in shama, I wrote to a couple of bird clubs and asked.

A wonderful Malay, Taufik, saw my request and wrote to me privately to offer me one of his two shamas. He checked into Tinkerbell website and felt I was an answer to his dilemma. He had to sail periodically and felt it difficult to give the amount of care as he liked to. His parents, even though they love birds too, found it difficult to cope.

He offered his shama to me on the condition that if I have to leave and cannot take the shama with me, I will give him back. That was almost an answer from heaven to me. I wanted to see if what I have done with Tinkerbell can be done with an entirely different kind of bird. You recall I have my bird whisper Lin of Tsaoling as an inspiration

I had thought of buying from a shop. But if I do succeed with that shama what I have done with Tinkerbell, and if fate allow me to live in Taiwan again to be with Tinkerbell, I cannot see how I can say no to that. I cannot surrender that shama to be in cage again. Not withstanding that is a local bird, I cannot see how I can let it go into the wild as he may not have the knowledge to integrate back with nature. And being tamed, he also may be easily lured down and stuff into a cage. Even if that love will never be as what I have with Tinkerbell, I will have a love for that shama and that uncertainty troubled me to the extent I probably will not buy a shama.

So this offer from Taufik, with what he thought was very firm and stringent request that the shama be returned to him was almost like a dream to me. We spoke on the phone and I agreed with conviction to his terms.

I then rushed to complete my flight room where the training and bonding with the shama will take place.

On Friday, 14 Oct , at 2 pm, I went to Taufik's apartment in Choa Chu Kang as agreed to take over the shama. I step into his apartment to see cages of little mata puteh (white eye) songsters owned by his uncle but kept there temporary. I was impressed by the two big aviaries he commissioned for his two shama. Most people interested only in their singing abilities will keep their shamas in 20-22 inches round cage with a few rare exceptions. Taufik is one of those rare exception. 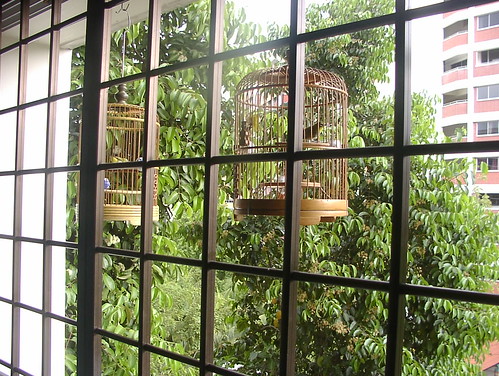 Cages of mata putehs outside his apartment 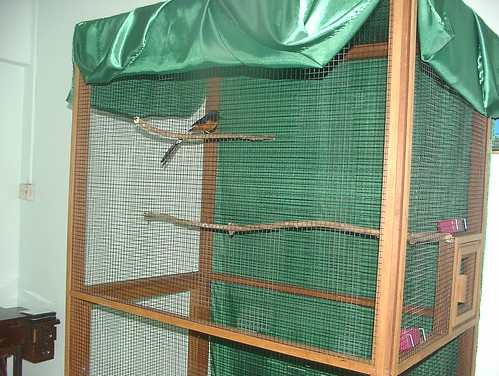 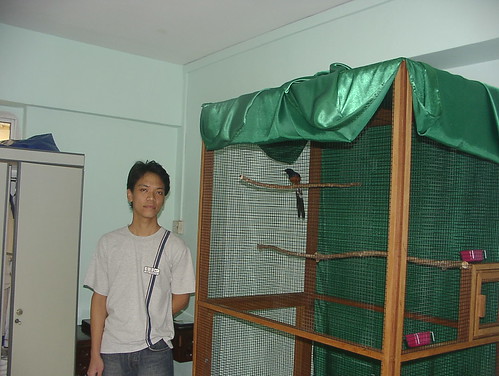 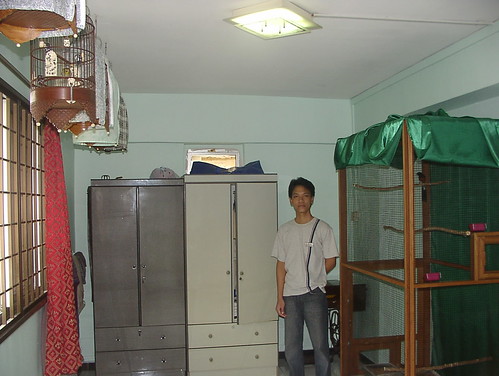 Taufik and Titan and mata putehs above 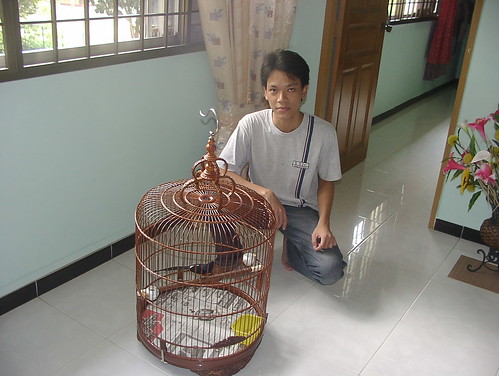 We then went to a nearby birdshop that he normally buy live food from. He told me frankly what prompted him to decide on me instead of the monetary offers he rejected from others were the photographs of Tinkerbell, the state of her health and her feathers. He decided on that basis before he went into what he complained were my extremely long and complicated letters. I feel sorry for Taufik that here I am with a long and complicated report on our meeting and that handover of the shama.

On the way there, we discussed at length on the diet of shama and our best efforts must be to replicate what they eat in the wild. By knowing the shama eat insects in the wild and giving them insects that we can buy are not the same thing as the insects in the wild eat a lot more varied diet than the insects we buy commercially and not nutritionally the same as those shamas will catch in the wild. I bought a batch of live crickets together with the commercial food that he fed the shama with. He agreed that I should proceed on my research to formulate a basic diet that I planned to do with a variation of Tinkerbell's mash and high protein cat food. I told him I do not plan to change the shama's diet for at least two weeks to minimise the shock of changeover. Any changes I make will be very gradual after that.

We then returned to his house.


He loaned me one of his beautiful 20 inch bamboo cage for transportation of the shama. That shama was already taken out of his aviary and in the cage ready for me. He love that shama. As an indication how he cared for him, he called the shama 'Precious' as an indication of the love that interwoven in the transaction as to how he got him. Almost the same way as I gotten him from Taufik. He told me that when he went sailing, Precious will not sing and only sing again when he is back.

I normally like to retain the name of a pet especially with such a beautiful history. But to me, shama are singers because they are male and the singing is a kind of territorial declaration. I hope to be successful in giving the shama total flight in the entire apartment and perhaps outdoor as well. You know I felt too that creatures are empaths and can kind of read our mind. For a male shama that you like to be strong and courageous, a name like 'Precious' may not give the vibes that I like to give.

I discussed with Taufik on that and asked what is the name of his other shama. He told me the other shama is talled 'Titan' with the connotation that he is a warrior. I smiled, and asked him if he mind if I change Precious name to YingShiong, as that is Chinese for heroic warrior. I told him if I called him YingShiong, the mental image of heroic warrior I project to him may be better than a mental image of Precious. I also thought that should I be successful and can take YingShiong out, I rather be heard calling YingShiong than Precious, Precious. We discussed the Malay equivalent but that has 3 syllables and did not sound as solid as YingShiong.

Taufik smiled and happily agreed with my suggested name change.

He rejected the traditional 'angpow' I tried to give him as a token of my appreciation. I was pleased when I persuaded his mom to accept that after much persuasion from me.

I got home with YingShiong after that. I quickly place the sealed bag of live crickets (with oxygen pumped in) into the freezer. I rather not let the cricket live on consuming their own fat and making them nutritionally less for Yinshiong. At a later stage, I will rear crickets.

YinShiong was placed in a 900mmLx600mmWx600mmH (36" x24" X24" )cage I prepared for him. The cage is not as big as the aviary YinShiong was in. I do not feel apologetic about that at all. Food and water was provided for him in the cage.

The small size of the cage will serve to 'encourage' him later to come out and fly in his flight training area.

I converted the patio/balcony
into what I called ' flight training area'. That will
be about 3.4 meters long by 2 meters wide and 2.6
meters high (11' x 7' x 9'). The cage is kept there and I have
an armchair and table as well so I can read my books
and kind of 'live' with Precious so he can get to know
me in the beginning.

A smaller flight area will be more comforting for the
bird at the beginning when I bring him through the
initial process of trust, bonding ,clicker
training leading to flight recalls.

If all that does not work, YingShiong will then have a big aviary. But if that work out, the flight training area will be his effective aviary to be followed later by the entire apartment as well.

After I feel he is settled in his cage enough, perhaps a week or so, I will then start with operant conditioning, or clicker training.

Shama is an extremely shy and nervous bird and I need to take great care not to rush him and everthing must be done to his own time.

I spoke softly to him. I told him that Taufik love him very much still. He is not abandoned by Taufik. He is here with me and I will do my best to give him a good life. I spoke so he get use to my voice. I took a book and made a cup of coffee. I rather have an ice drink. But with the crickets in the freezer, I decided to forgo my cold drinks so the crickets can freeze solid to preserve their nutritional value, until I can master how to raise juicy succulent crickets like those I ate with relish in Taiwan.

The things we do for our birds can be stupid.

I sat as far away as possible to give him 'space'. In between reading my book, I spoke to him hoping my voice give him comfort even if he may not understand me. He hopped about on the perches in his cage.

It was 90 minutes later. I was pleased when he burst out in a strong but brief song. I had to call Taufik to let him know. He was pleased at that too.

Soon it was dusk and all light left the sky. I covered his cage and secured the flight room against Ivan my cat and left him to spend his first evening with me.

The letters on that bird whisperer of Tsaoling

The letters on that bird whisperer of Tsaoling are below in chronological order. They are all in Part 1 - Early Period of Tinkerbell.

The visits covered a period of time as can be seen from the date of the letters. You can see in between the 2nd and 3rd visits the additions to the birds of that bird whisperer.

He, that bird whisperer of Tsaoling, is the man that inspired me the most.

(This is a blog and I make daily entries when possible. You continue on reading day after day as you so wish. You will see below navigation arrows that will take you to the next day.

My wife took a few photos a couple of days later and you can see YS in
http://www.flickr.com/photos/shimmertje/sets/1149687/
)

editted and added on 13 dec 2014
Even though I gave Yingshiong away to Jurong Bird Park in early 2007, Yingshiong remembered me when I went there in 2014 as can be seen in