I am at a loss to the title of today. I just could not find the word or the words. What Tink did in the last 30 minutes before I left her for the day was so haunting that will be imprinted into me, and I suspect into you all as well. Humaness might even be the worse possible word to use. We have shown ourselves to be so capable of evil, spite and cruelty to both ourselves and the other creatures living with us that perhaps I should change that title. The only reason I could not is that as I have said, I just could not find the word or even words.

The man in that tuxedo did not woke me up. A guy in a t shirt and pair of shorts shook me by my shoulders. I then lie back for a few moments, just to rest my eyes, and fell back into sleep. Even if he was wearing t shirt and pair of shorts, he was nice enough to get me up this time. With lots of guys in different rooms and beds and armchairs and with different waking up times, you agree alarm clocks are not so appropriate if you want harmony and not have a riot of irritated guys woken up before their times.

The weather forecast for today from the day before was that showers and thunderstorms could be expected. I rode to Yu's factory under grey skies and very light misty shower. Taiwanese termed that the mao-mao yu. Mao-mao is the term for the very light fuzzy hair on arms and yu is rain. (No! Yu, or the guy waiting for me to pick Tink up is not rain even if his name sounded like that. The character strokes are very different)

I was very pleased with the altered purple harness I worked on yesterday. The harness fitted Tinkerbell so well almost like the tuxedo fitted that guy who woke me yesterday. On that trip to Tsaoling, Tink harness looked like Charlie Chaplin fitted that harness on her.

As I had mentioned before, rain or not was not very material to me. Rain or its possibility might act as some constraints as to where I ride with Tink. It could be pouring and I would not moan that I could not go somewhere. It was incredible the difference in a trip deliberately planned to go to be with someone and which in case nothing else really mattered.

I know I have known aberrations that I never could figured out that brought me to places that made me wonder why I ever decided to go there be it walking in tight paths between minefields or inching myself or narrow paths with 1000 meters drop. But I am a creature of comfort, or at least, try to find the line of greatest comfort or less aggravation.

Thus the weather, or rather the threats made by weather forecasters, determined the flip and the flop of where we went today.

As I rode off with Tink, I decided lunch of beef noodles because Tink loved noodles.

In the last trip to BanTienYien, I had wanted to go to the temple which was before the pavilion but the threat of rain made me rushed down the mountain and as I related, got caught in a massive downpour on the plains instead. One of those things you need to accept in life is that you get what you try your best to avoid, or at least that was my path. Maybe that is why I may be more philosophical unlike you lucky folks who get whatever you wanted most of the time.

I thought I go to LangTang. A name is just a name and by going to LT, that did not meant I was going to the same place. LT was the smallest reservoir of Chiayi but there were many places in LT. Pavilion at BTY was such a painful spot in my memories earlier as that was the last place I brought Tink and my wife to before we had to leave her on that last day. Yet the going to that pavilion the day before was such a heart warming experience for me this time.

I decided to go to the Twin sisters pavilion at LT where we also went on that last day which left very hurting memories for me. Was that why a Russian reader wrote to me he loved that first couple of the photos in the folder below.

I thought we would go there. There would be two pavilions there in case it rained. Perhaps the pain in the past was imaginary, in which case happiness was also imaginary. But that imaginary pain lingered so long that those imaginations must have brought about their own realities.

That healing continued. I placed her on the railings by the water and took very happy shots of her hoping even if the shots might not be the standard taken before, they can show you the harness fitting. It was a very happy time spend there and longer time might have been spend. But some contractors decided it was a good time then to do some fitting out works with two jack hammers. 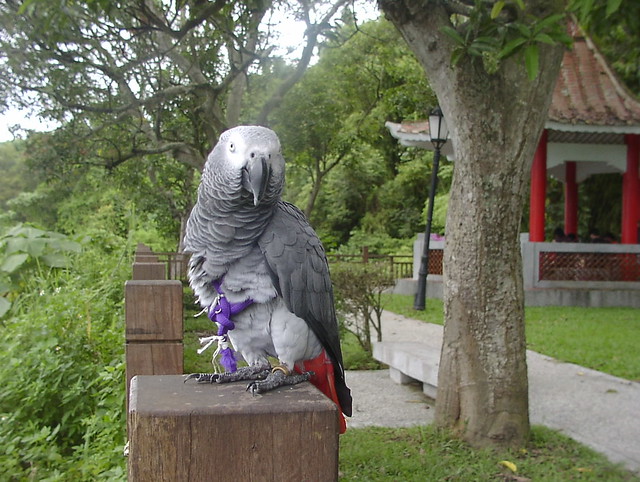 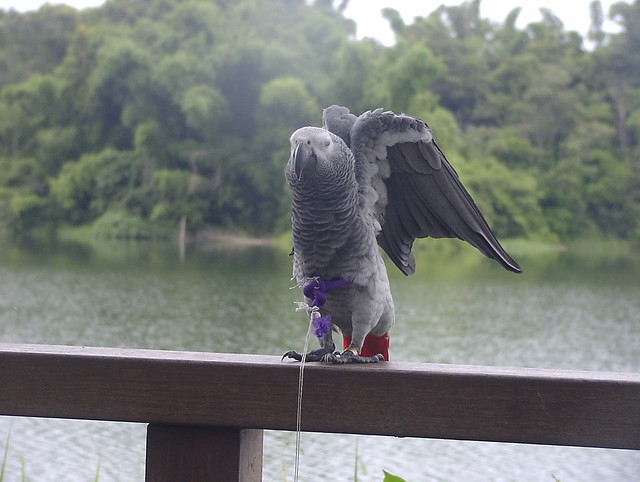 So I decided to go on to BanTienYien temple. You need to pass by RenYi Tang reservoir in a figure of speech sense prior to that BTY temple. The size of the droplets of rain increased. Noth withstanding the sky looked a lot less grey, I remember the threats from the weather forecasters in Taiwan. Their threats and dire predictions made me chicken out from that ride up the mountain to BTY and I turned and finally got my way to RYT.

The sky brightened up in that 20 minutes I took to get RYT. The sun was shining and the birds were singing and the flowers were nodding and kids were skipping and lovers were prancing (in slow motion) and all that jazz was playing. I thought I heard the word idiot idiot softly softly repeating and echoing in my ears.

I wasnt about to go back up that mountain. And really as I have said before, it did not matter to me where I was or where I did not go to but wanted to go to as long as Tink was physically with me. Even if she wanted to manicure my nails beyond the quick, I was happy. I had many empty ciggie boxes to bribe and distract her with. I still had a key to help me open flip top cans. And typing with the ball of my fingers aint that difficult with the practise I was doing. The SWNs also had the shampoo hair round plastic scrub that I used to shampoo and scrap my hair with.

Took Tink to do some recalls including a couple of long recalls of 30-40 meters. That was to preempt her from doing those long crazy flights of hers that I suspect was done by her whenever she thought I was too meek like that Bim. 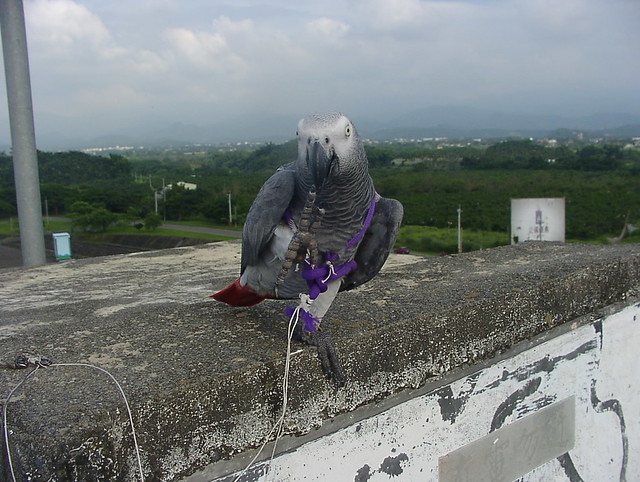 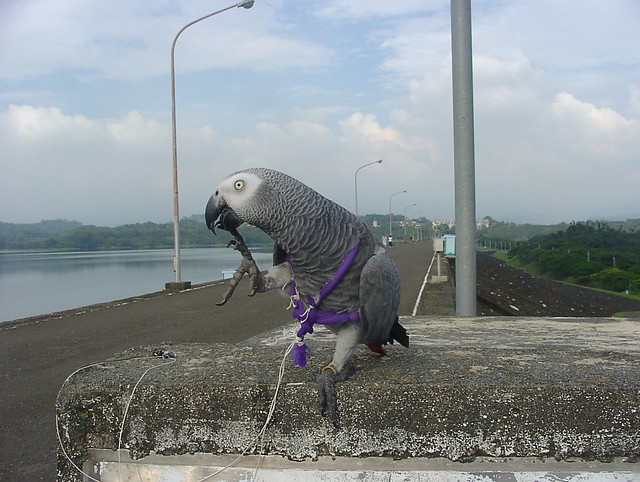 I also watched the new harness and especially the harness leash. I had used 2 loops of line as I was paranoid but decided one loop of that stronger-than-Kevlar line was adequate. The clip and swivel joint was light already, but I wanted to make it lighter. The solution was so simple. But you need to understand the harness was developed in incremental steps, one of which incorporate the clip to that swivel joint. Then I wrote I had to tie dead that line to the clip as TInk was getting that out and actually disquised that from me by placing that loop back again into that clip. I did not even need to use the clip and discard that totally.

When we reached back to Yu's house for dinner, I did just that and looped that line into the closed circle of one of the rings of the swivel joint.

We then had dinner. Tink being released persisted to perch on the high baskets as we hand dinner on the table below her.

I called her softly and was please she flew down to my shoulder eager for her share of human food. I feed her morsels lifting them up with my chopsticks to her mounth. Yu took up a bit of carrot for her to see her refusing his offering. She then moved to my other shoulder away from him and Yu dropped that bit of carrot into my bowl. I picked that with my chopsticks to offer to Tink. It was gratifying and unsettling to me both at the same time. I felt uncomfortable that Tink gave such a direct snub to Yu.

Tink had her fill and flew up to the basket above.

The table was cleared and I thought I would have an early night tonight (it may be amusing to you folks it is 1 am here now at this point. I still have not gotten to completing that SWN section and I have not came to the end of today's events even if I am close to that now).

I stood up to go to her and asked if she wanted headrubs. She bowed her head making baby noises and in a while, flew to my shoulder. I walked back to the sofa where I was sitting together with Yu to sit back near him with a couple of feet between us. She was with me still on my shoulder with her head bowed receiving her head rubs from me. Periodically, she turned her head up, grapped my finger and mounthed it very gently for a couple of seconds before turning her head down again for her head rubs.

She then indicated she had enough from me. She climbed down from my shoulder onto the sofa and remained motionless just beside me for a minute or so.

She then walked slowly to Yu, rested her head on his shorts, closed her eyes with her posture in the 'I want head rubs'. Yu was very pleased and gave her gentle head rubs and Tink periodically stopped that rubs to give him the gentle mouthing of the finger with her beak. I swear I was not jealous at all and I really love that.

After five minutes, she moved her head from Yu's shorts. Stayed motionless for a while by him. She then walked that couple of feet to me. She bend her head, coo, gurgle and chirped at me and mouthed my finger gently now and then as I gave her head rubs. After a while, she stopped me and went back to Yu again.

She alternate between the two of us for 30 minutes or so.

Was she so conscious of the two of us, me and Yu, and the relationship with herself.

Was she aware in a very sentient way at the both of us and her?

Was that gesture from her meaningless?

If that was meaningful , what did she meant by that?

What was she telling us?

What was she telling all of us including all of you following the events of Tinkerbell?

I could go on with different interpretations which might be wilder and more inane.

But I tell you this. I was very very touched and moved. So was Yu.
I cannot speak for Yu. But I am so glad to share him with Tink.

I said my goodnight to her and gave her the final headrub and told her we will be together again the next day.

I then stood up, walked out of the house, and rode over to this Internet cafe.